We’ve spent the past couple of days on the island of Senja, and are now back at Olsborg, ready to continue on our way to the Lofoten Islands tomorrow.

The Norwegian tourist board has devised a number of scenic drives, one of which runs along the top of Senja. It’s a remote and rugged area where wild reindeer and moose are free to roam. The sea (or white tailed) eagle can also be found here, and there’s a puffin colony not too far away, so these can be spotted too.

We drove the short distance to Finnsnes and then crossed the only bridge onto the island whilst the Hurtigruten ship Kong Harald sailed beneath. The Hurtigruten fleet of ships runs up and down the western and northern coasts of Norway, taking 11 days to sail from Bergen to Kirkenes.

The weather has not been very good, with low cloud, poor visibility and plenty of rain. Even though the conditions weren’t great, it was impossible not to be wowed by the scenery as we passed by.

The island is quite mountainous and so there were a few tunnels to drive through. Being in a more remote part of the country, these tunnels were single lane with passing places, so we had fun when vehicles came the other way – fortunately I didn’t need to reverse the van.

Last night we stopped at Mefjordvaer. The car park overlooking the harbour was full, so we parked on some waste ground nearby, with a couple of of German vans for company. We went for a walk along the harbour, but the place was deserted due to the rain.

Today we continued our way along the scenic route, past the troll museum to the village of Hamn. The weather hadn’t improved. At the top of the mountain there was a viewing platform where we had a great view of the fjord, and the view must look stunning when the sun’s out. A bit further along, we came across a lake which still had ice floating on the surface – well we’re still in the Arctic Circle after all. 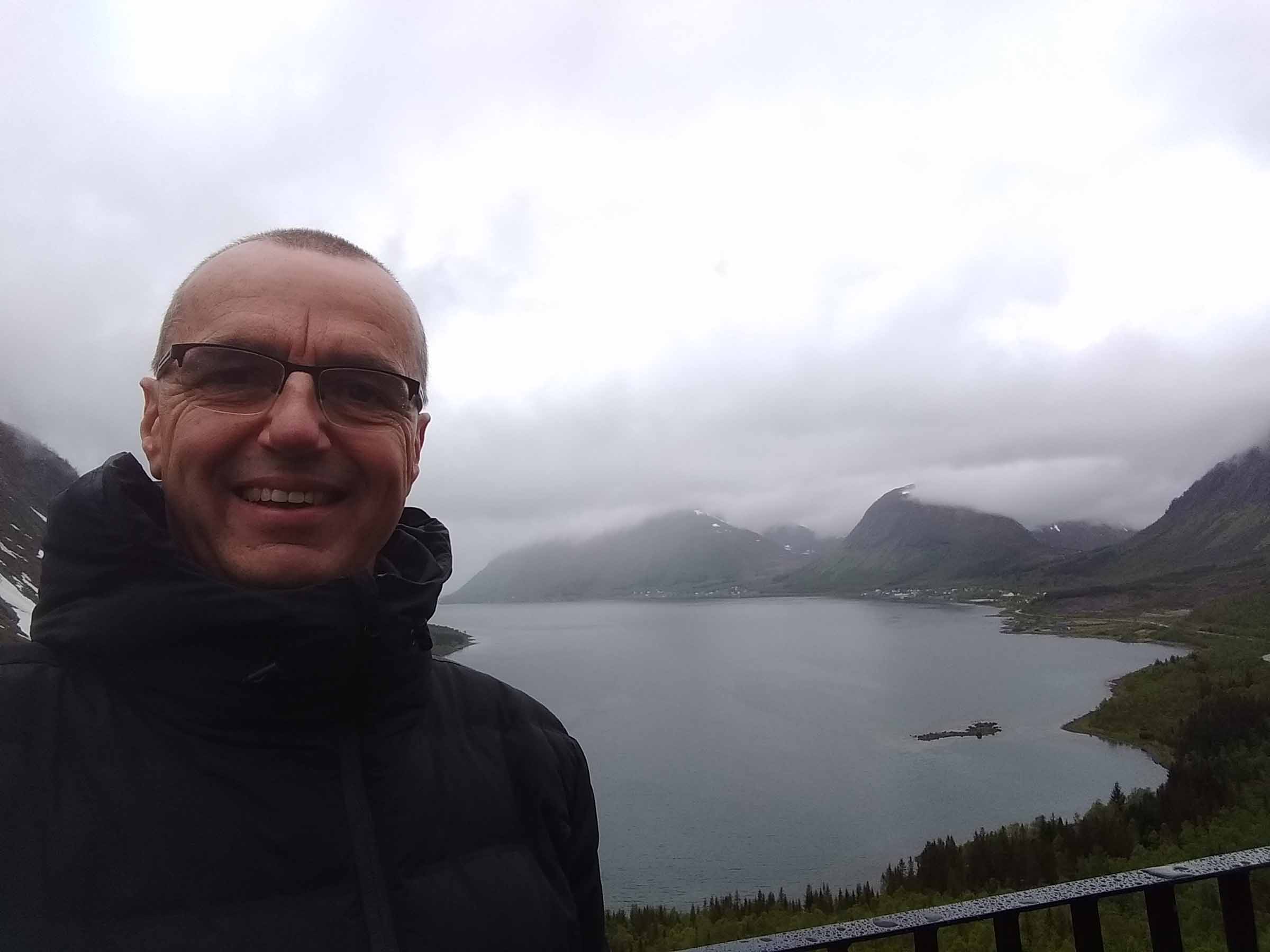 We stopped again a short while and had a wander outside the troll museum. The Norwegians definitely have a thing about trolls! 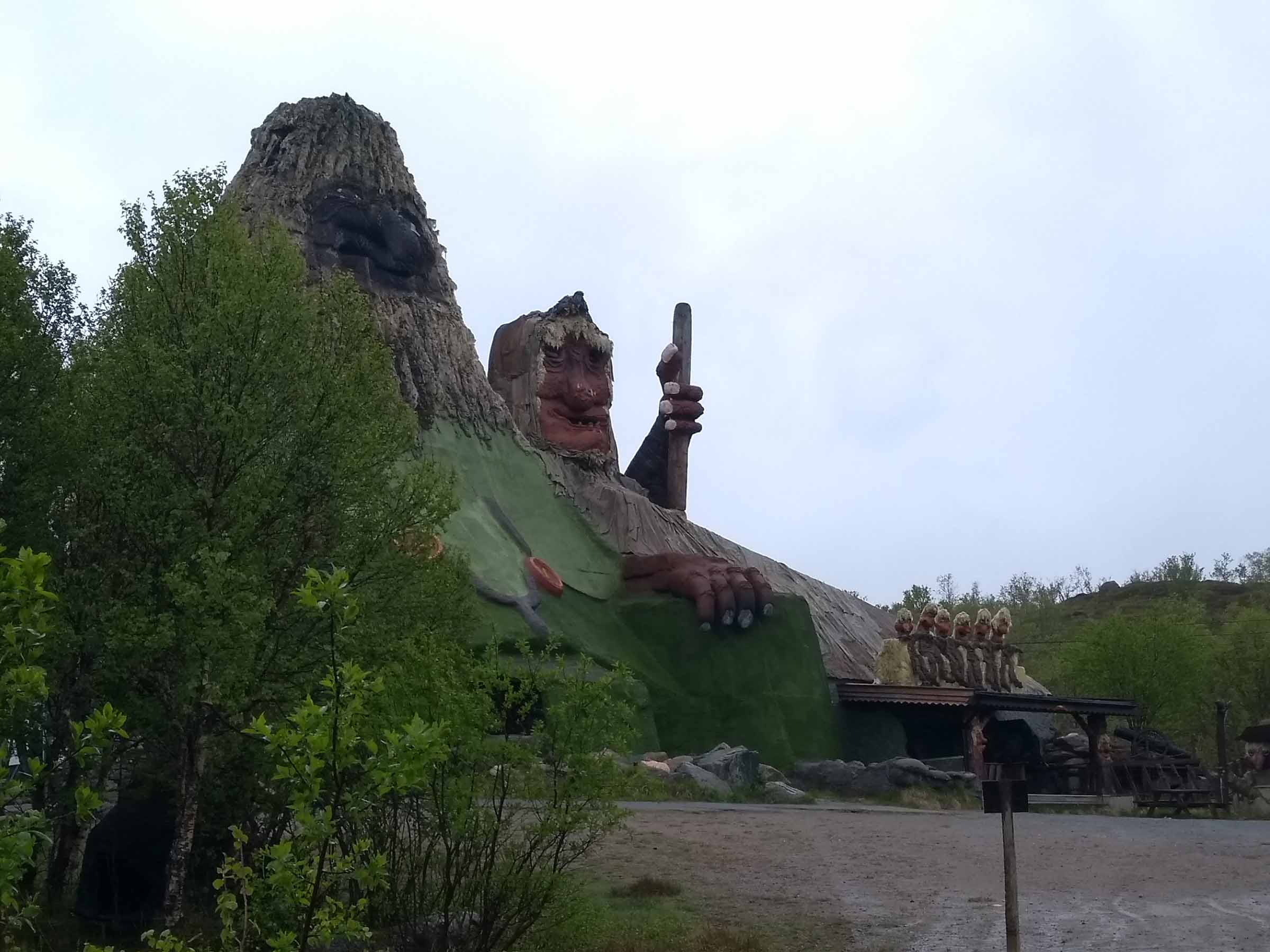 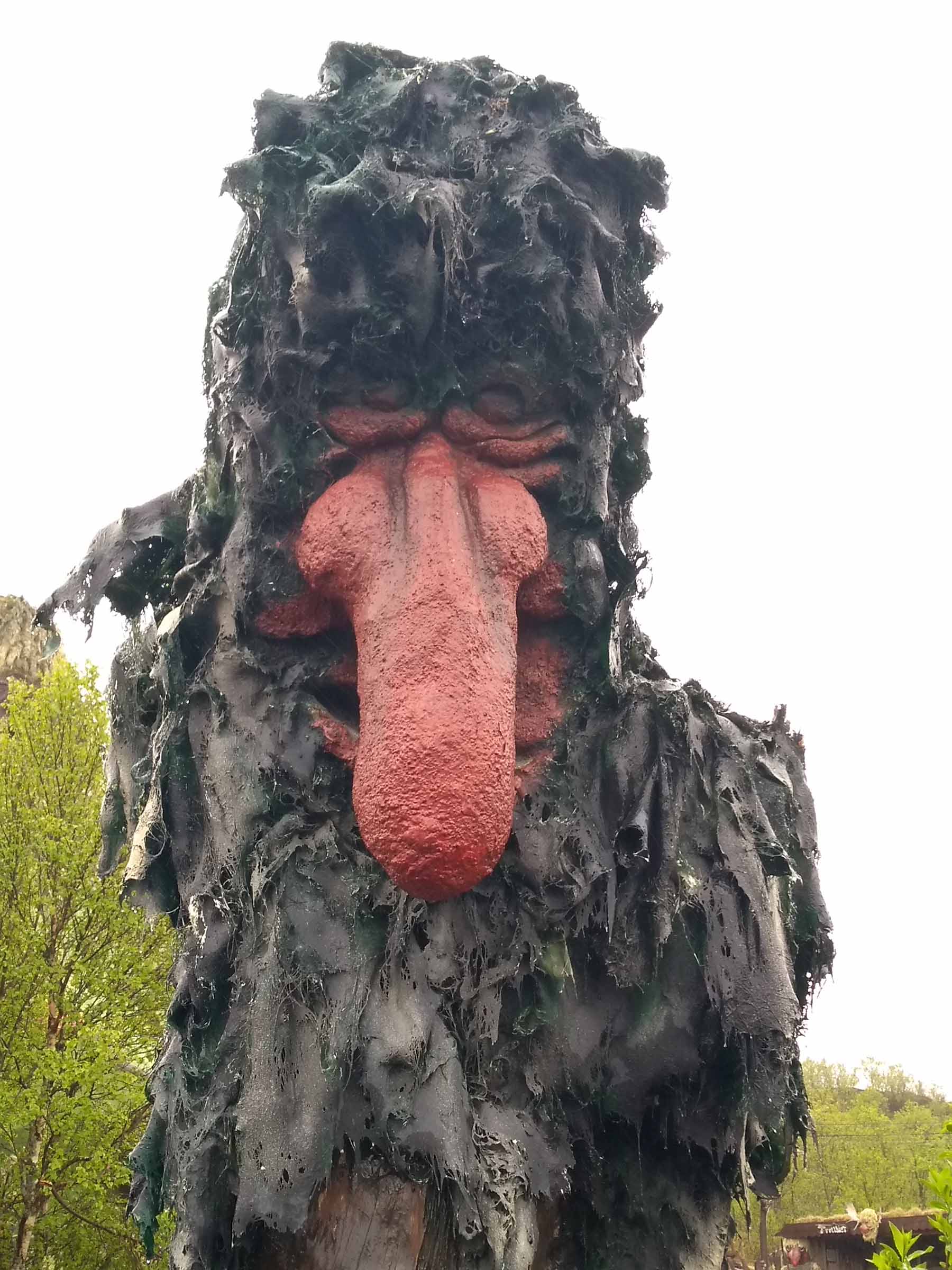 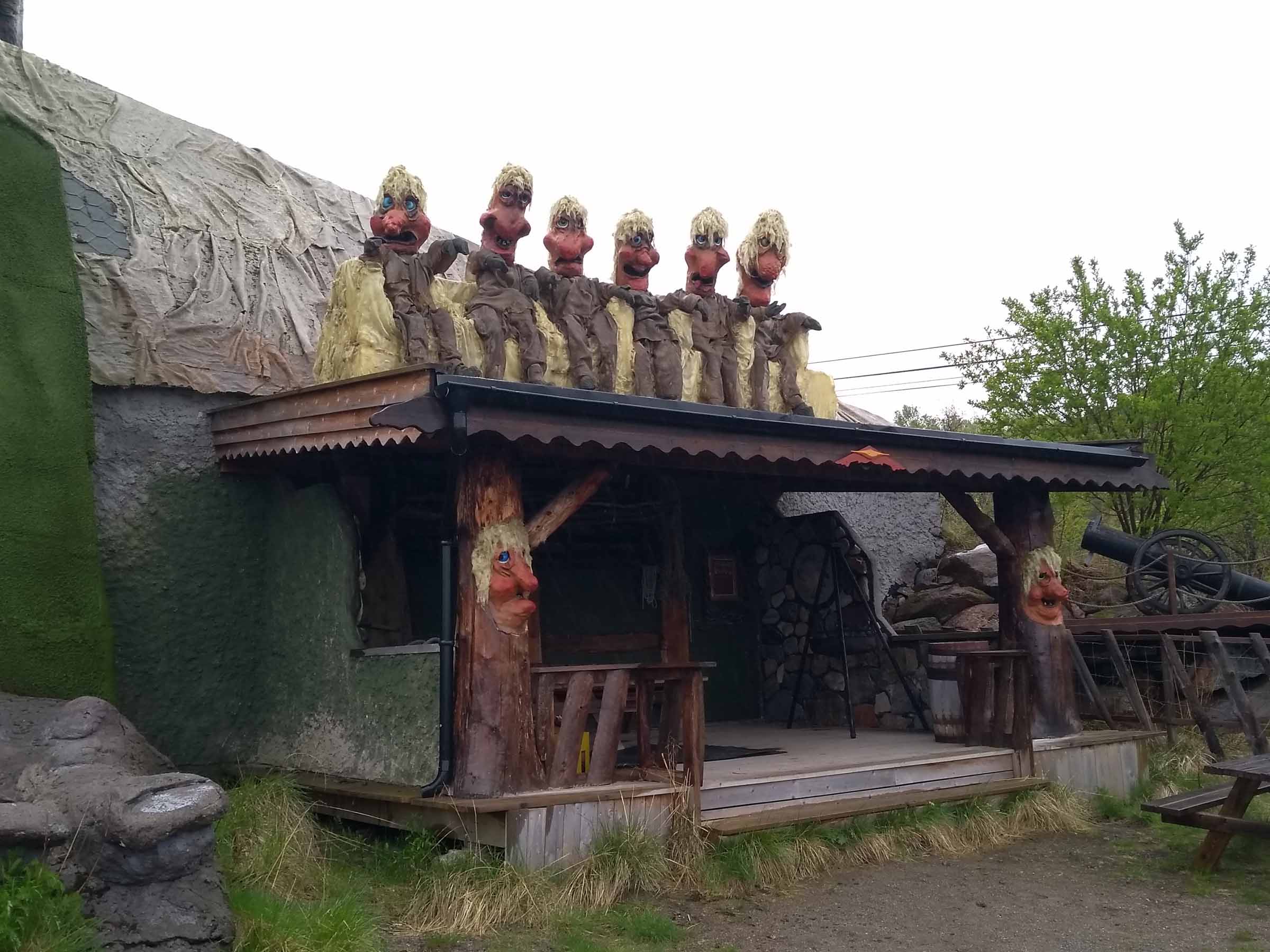 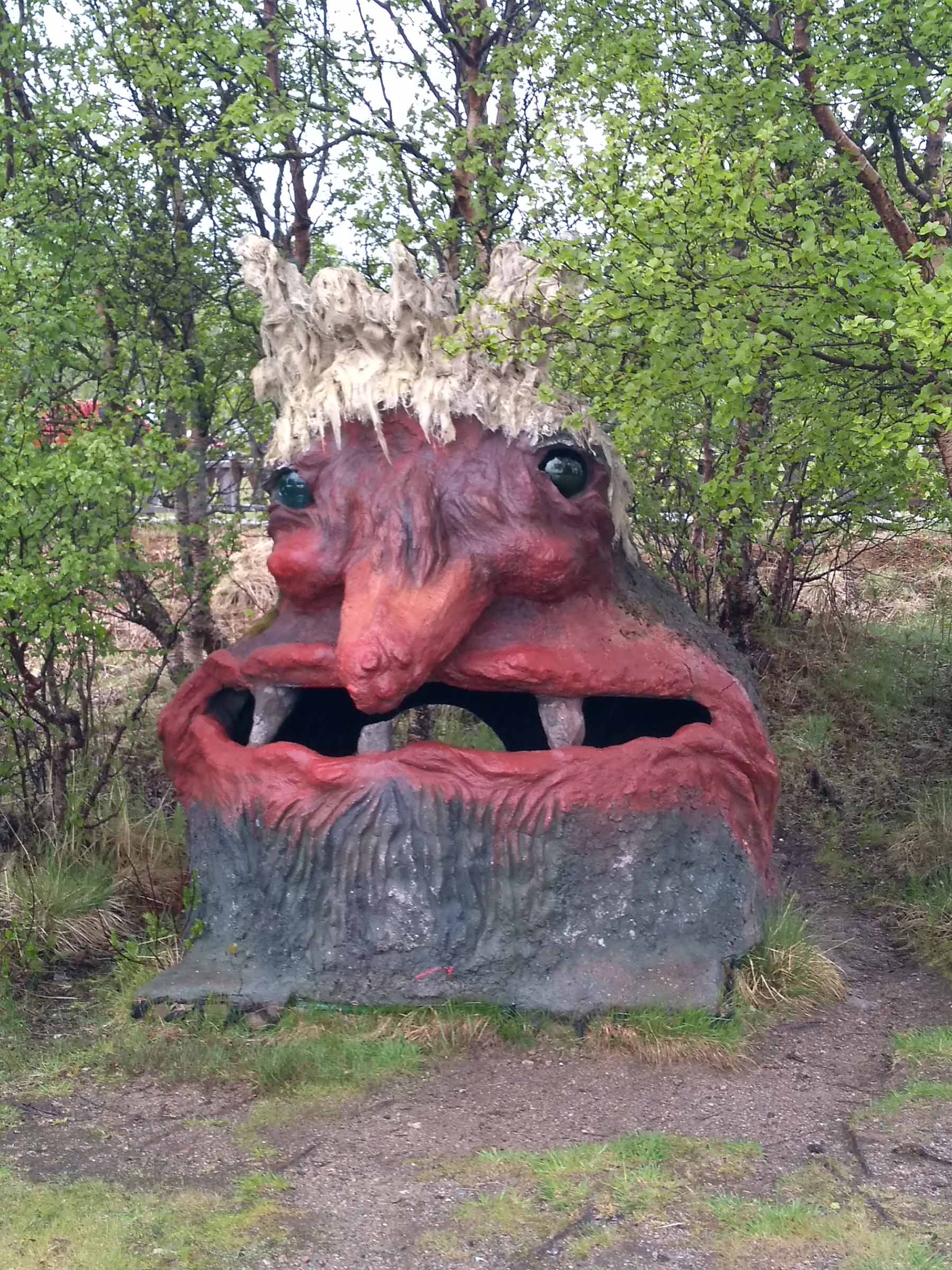 Hamn is another small fishing village, though the buildings around the harbour looked to be holiday homes. When we arrived it was still raining, and the place was deserted. The parking area had been taken up by building materials as some more holiday homes were under construction, so it wasn’t possible to stay for the night. After getting out of the van for a quick look round, we decided to return here to Olsborg.

Senja is a beautiful island, and it’s just a shame that the weather wasn’t a bit better, as it would have been nice to have spotted some of the wildlife. Hopefully we’ll have better luck when we get to the Lofoten Islands.

4 thoughts on “Back to Olsborg”