We left Bretung Melkevoll reluctantly, having spent a wonderful three nights there. It’s easily one of the best campsites we’ve stayed at, and the walk up to the glacier will be one of the highlights of our trip.

Yesterday we drove 200-odd km to Flåm (the little ° changes the pronunciation to Flom), and the road took us through countless lengthy tunnels including the Laerdal Tunnel which, at 24.5 km, is the longest road tunnel in the world. It took five years to complete, opening in 2000, and thankfully there was no toll to pay! 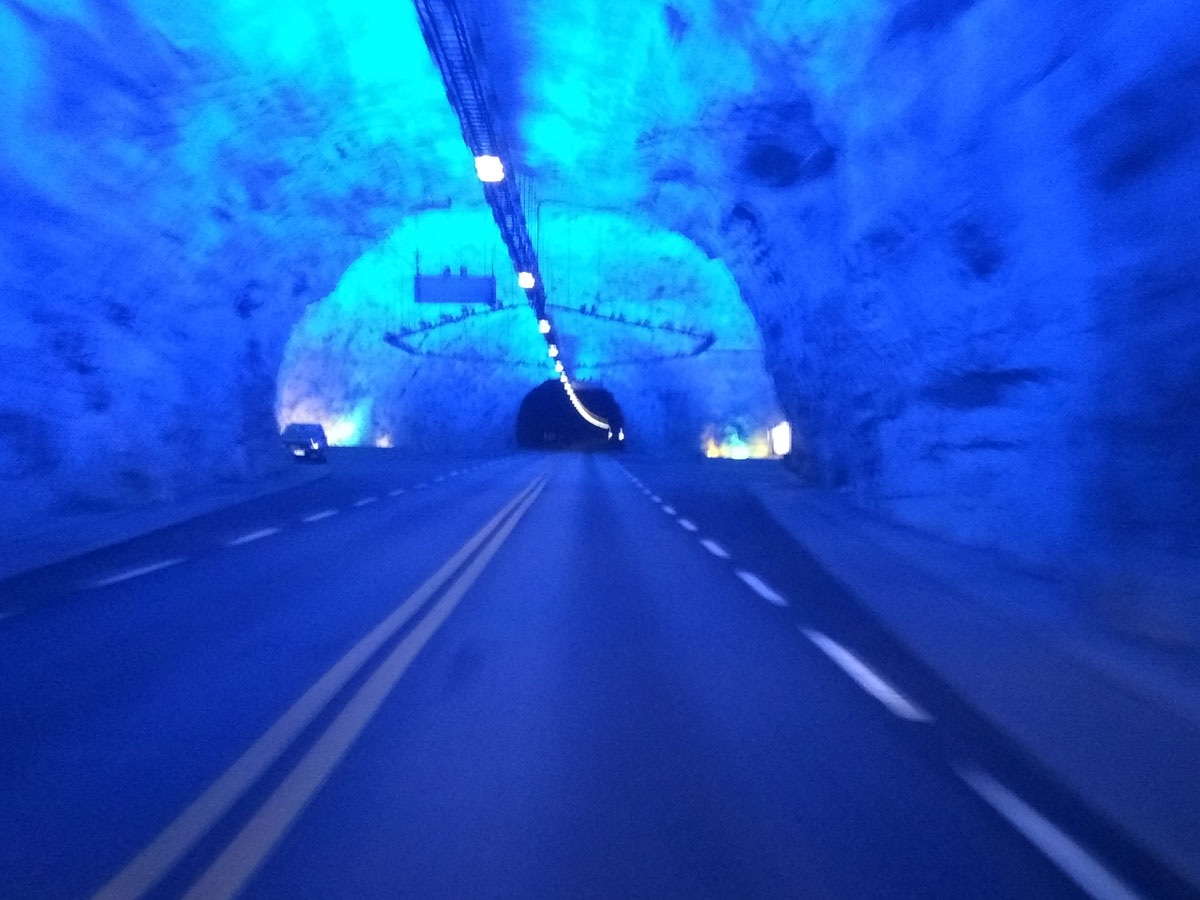 Flåm is a small town (population 400) on the shore of Sognafjorden, and all that’s here is a harbour and railway station, along with a few souvenir shops and cafés. The Flåmsbana railway was built as a branch line to connect Sognafjorden to the existing Bergen to Oslo railway line at Myrdal, so that goods could be transported from ships docked in the fjord by train to Oslo and elsewhere. Completed in 1940, the 20 km long railway took 20 years to build, and there are 20 tunnels on the route. With a climb of 865 metres (gradient 1:18), it is apparently the world’s steepest standard-gauge railway. Today Flåm has been connected by road to Bergen and Oslo (hence the Laerdal Tunnel) and so these days the railway is a tourist attraction, and the only large ships docking in the harbour are cruise liners, enabling their passengers to ride on the Flåmsbana.

The campsite is the only place to stop in Flåm, as overnight parking in the nearby car parks is prohibited. It’s well laid out with terracing, and we have a good spot on the back row overlooking the site.

Our reason for coming to Flåm was to ride on the train to Myrdal and back, a journey of 55 minutes each way. Having checked out the rather excellent Crew Center website, we knew that there wouldn’t be any cruise ships docked, so getting train tickets wouldn’t be a problem. Nevertheless we bought our train tickets yesterday, booking ourselves in on the 11:05 train.

We walked over to the station quite early this morning so that we could look round the (free) railway museum before queuing for the train. The museum takes an interesting look at the history of the Flåm railway, with lots of original artefacts on display. Having read other people’s top tips, we knew that the best seats would be on the right side of the train by the windows that open, and being first ones in the queue we got the seats that we wanted.

The scenery was superb, with lots of mountains and waterfalls. There’s a particularly large waterfall at Kjosfossen station, where the train stopped for a few minutes so that everyone could get off the train to see the waterfall close up and take photos. The two hour return trip went very quickly, but it was worth the €55 (each) cost. 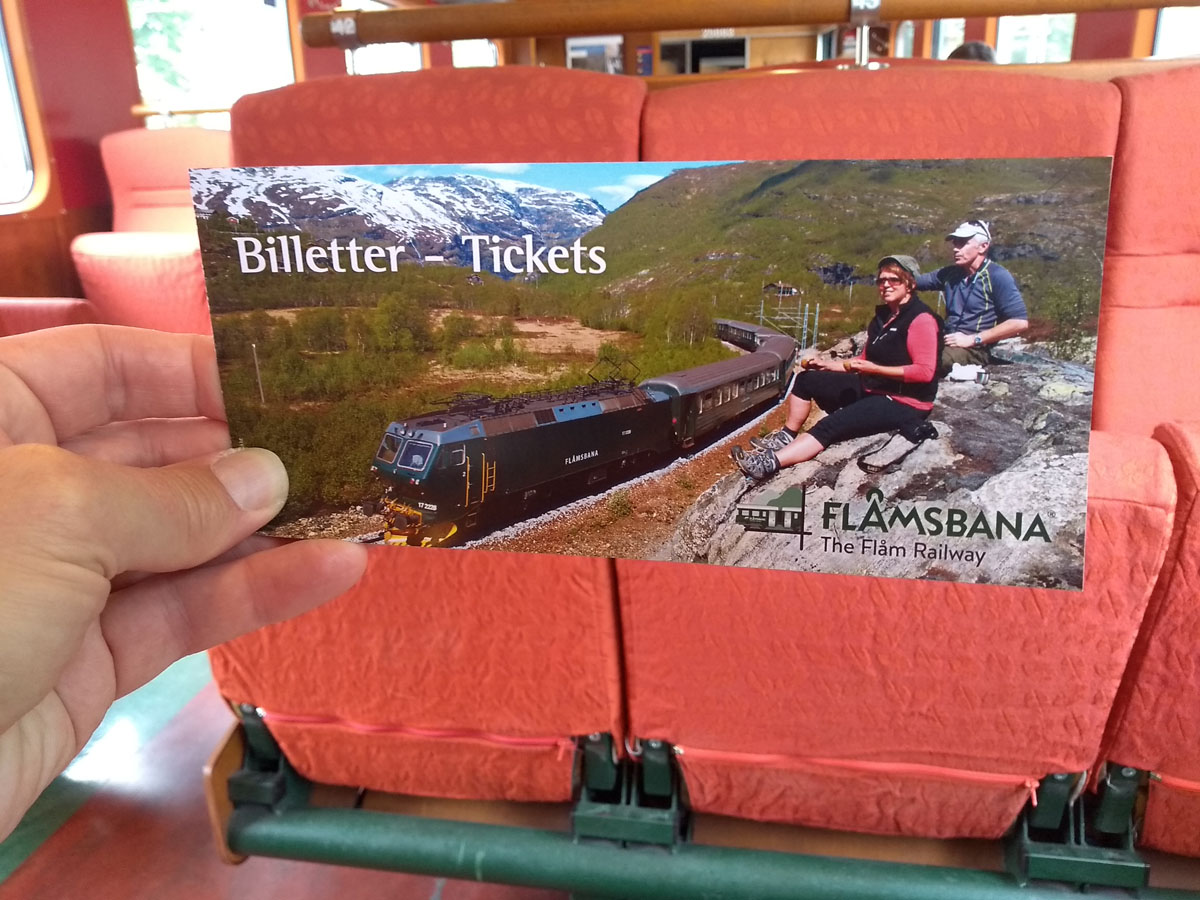 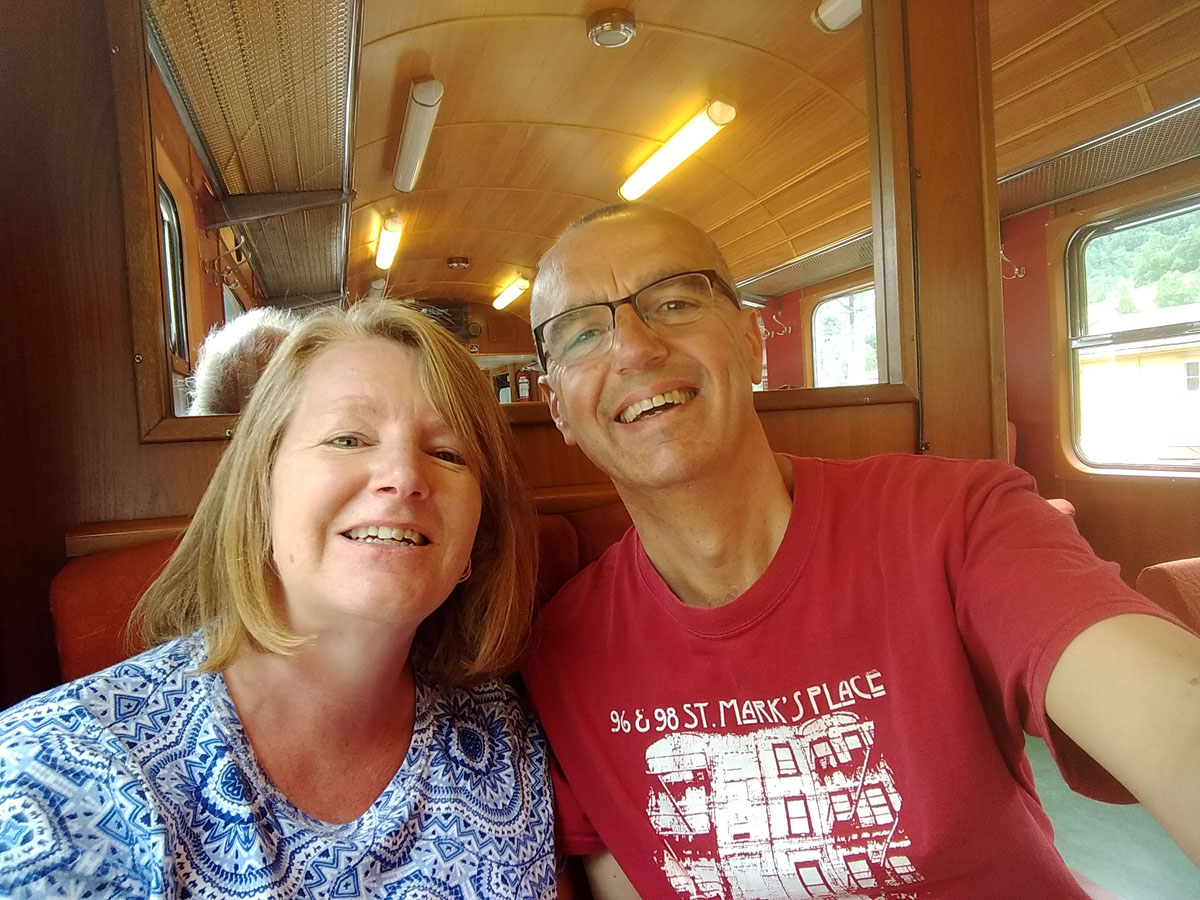 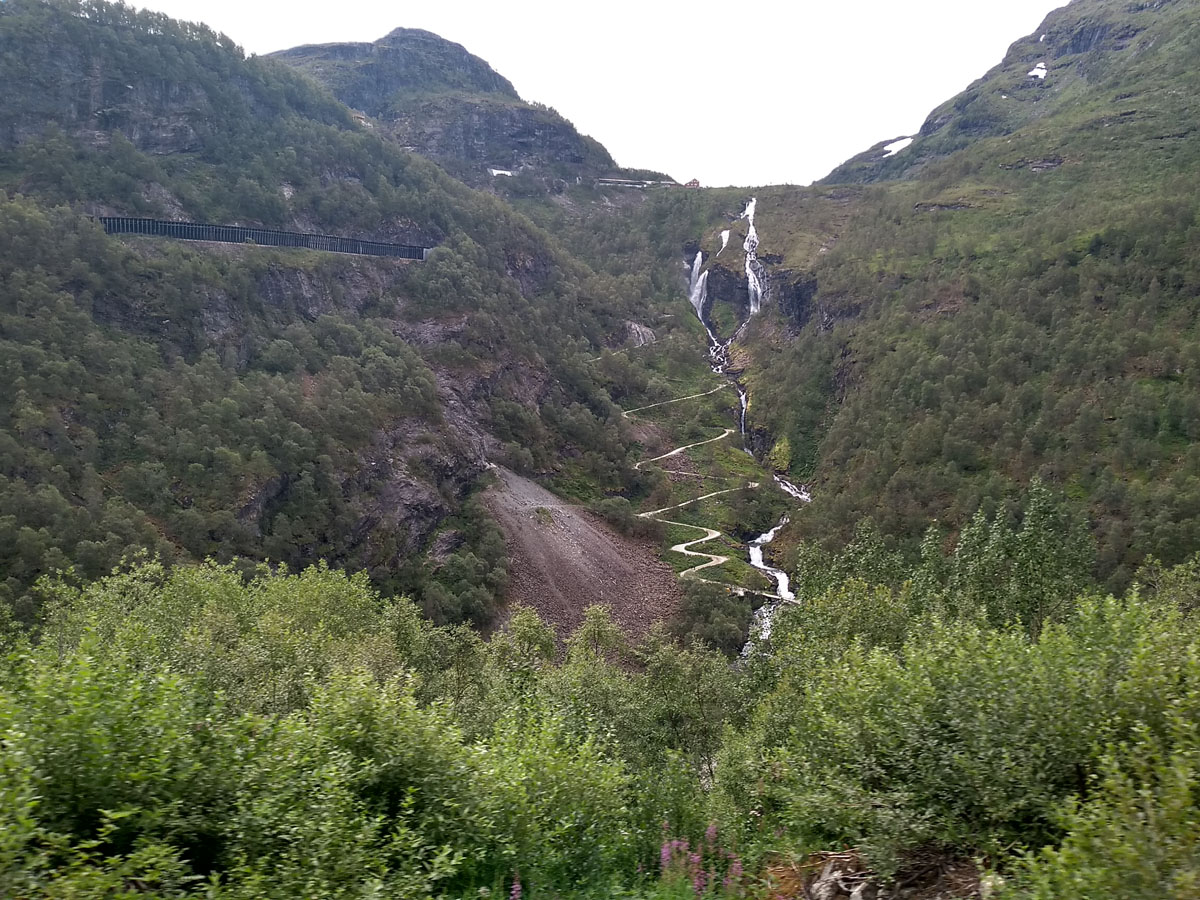 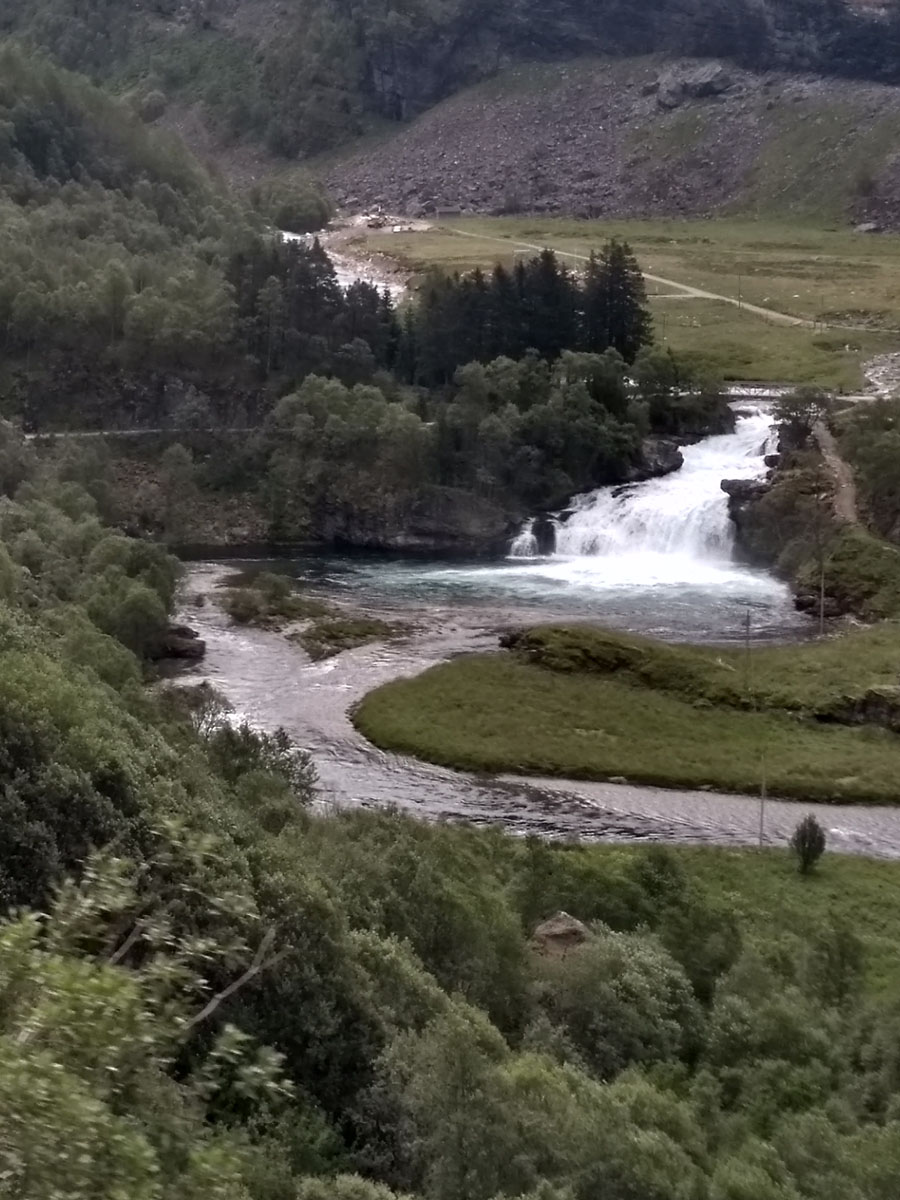 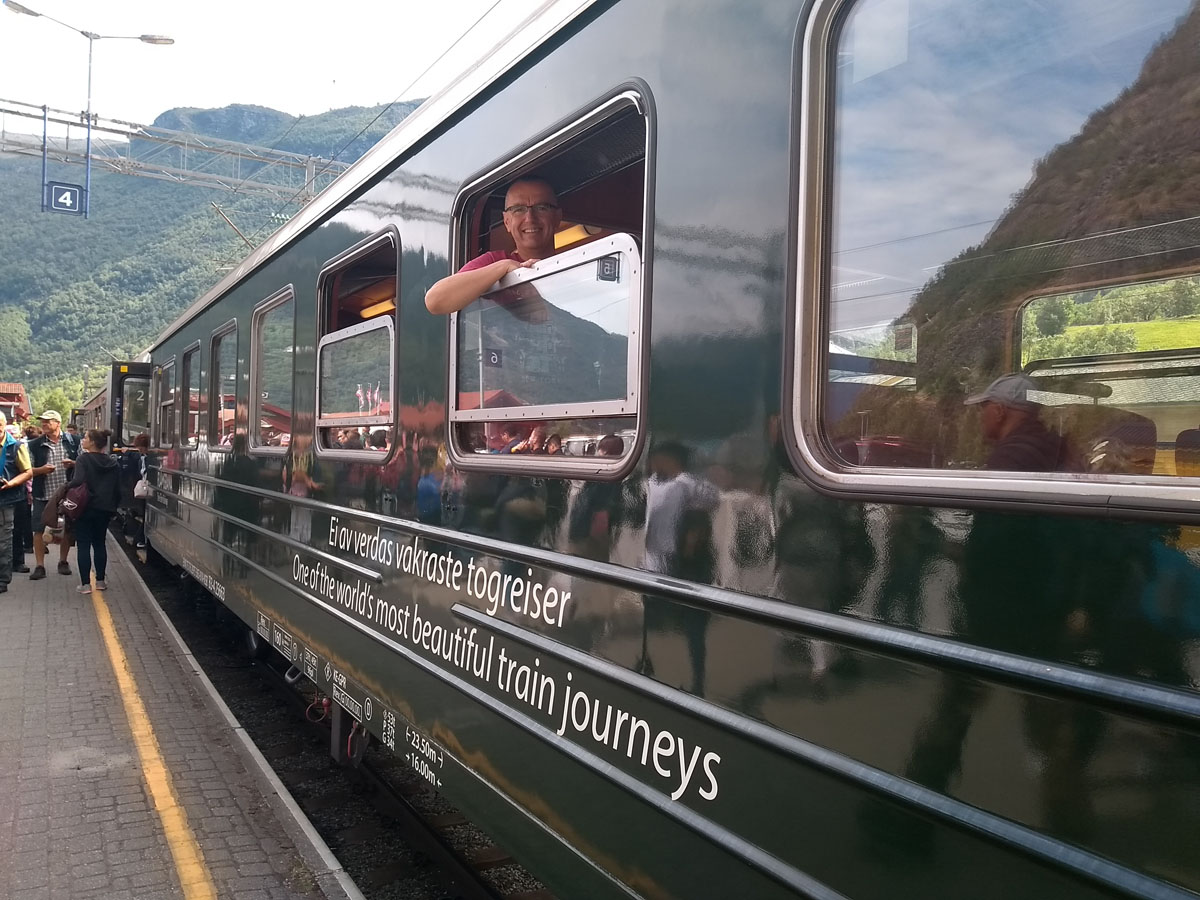 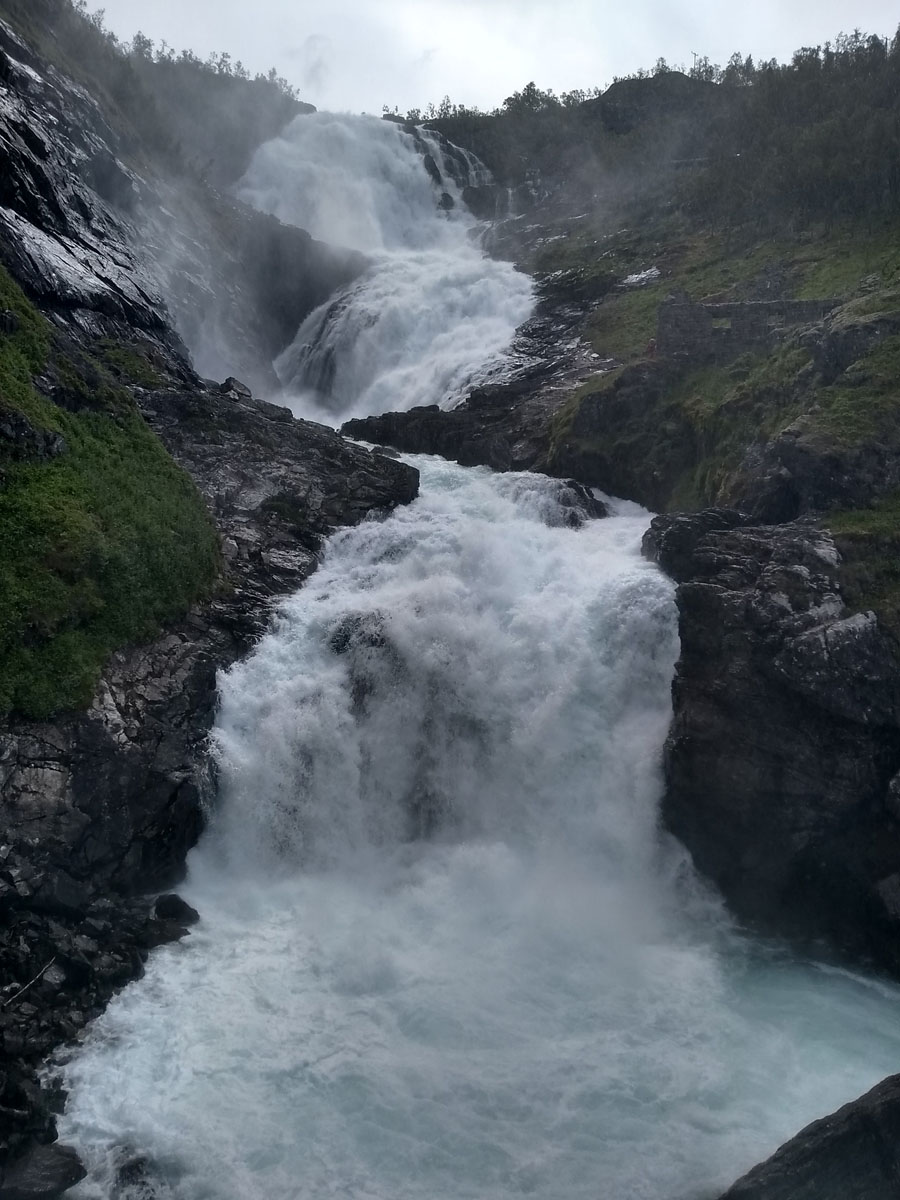 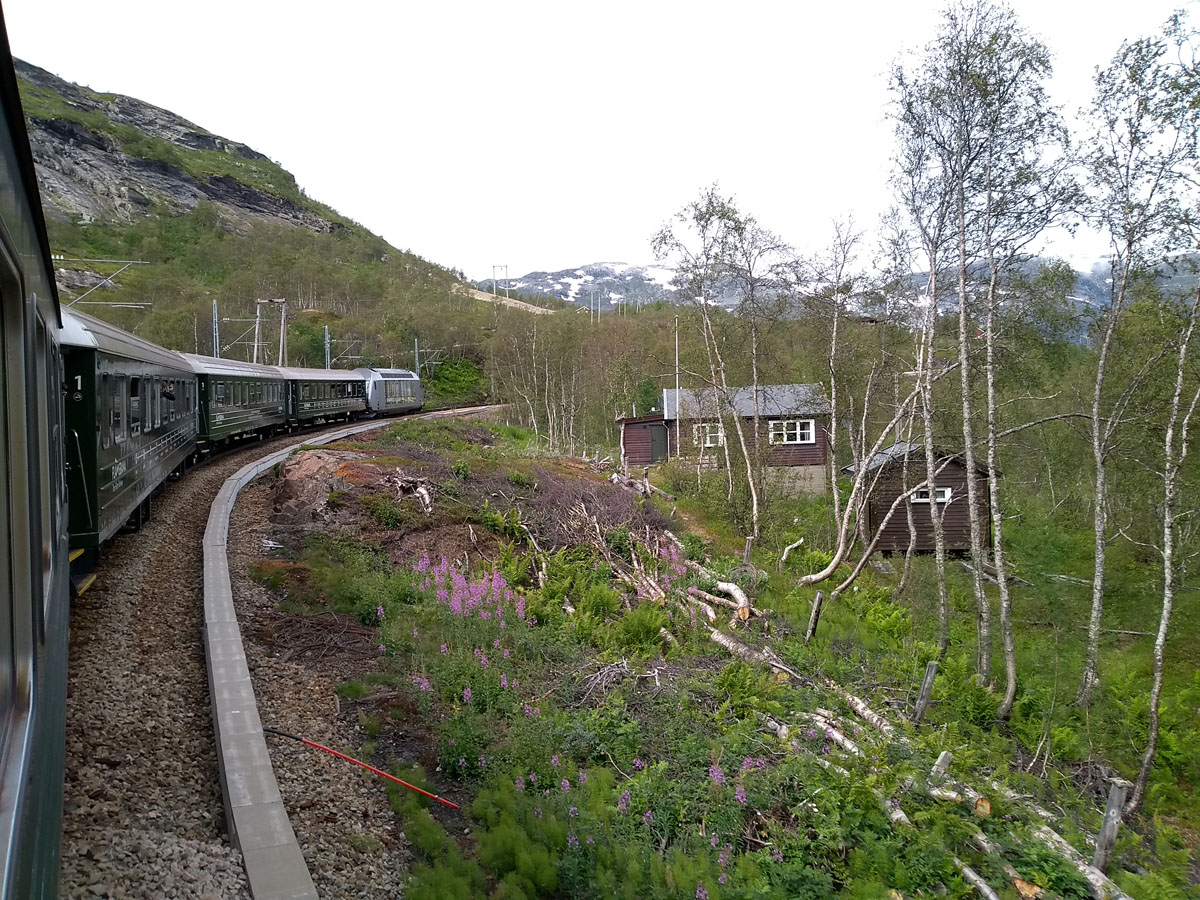 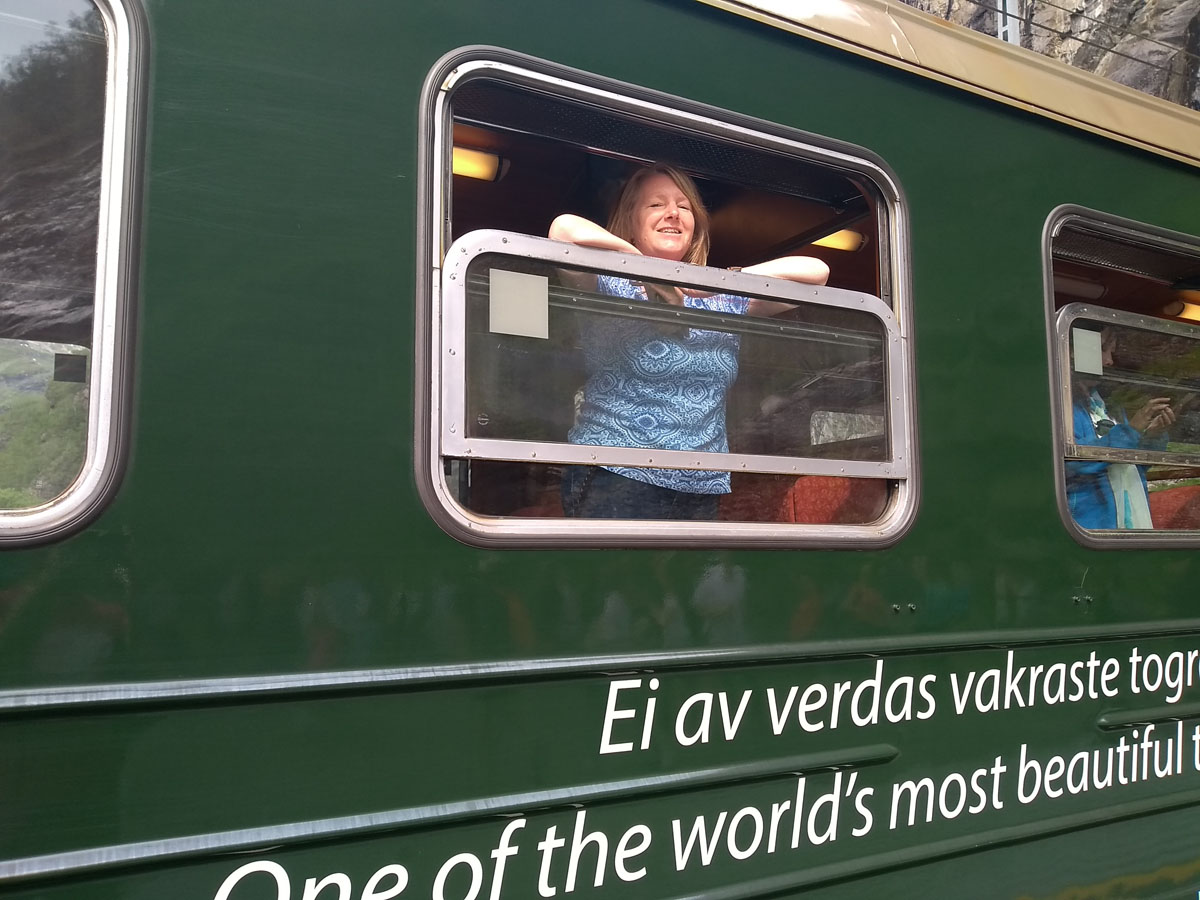 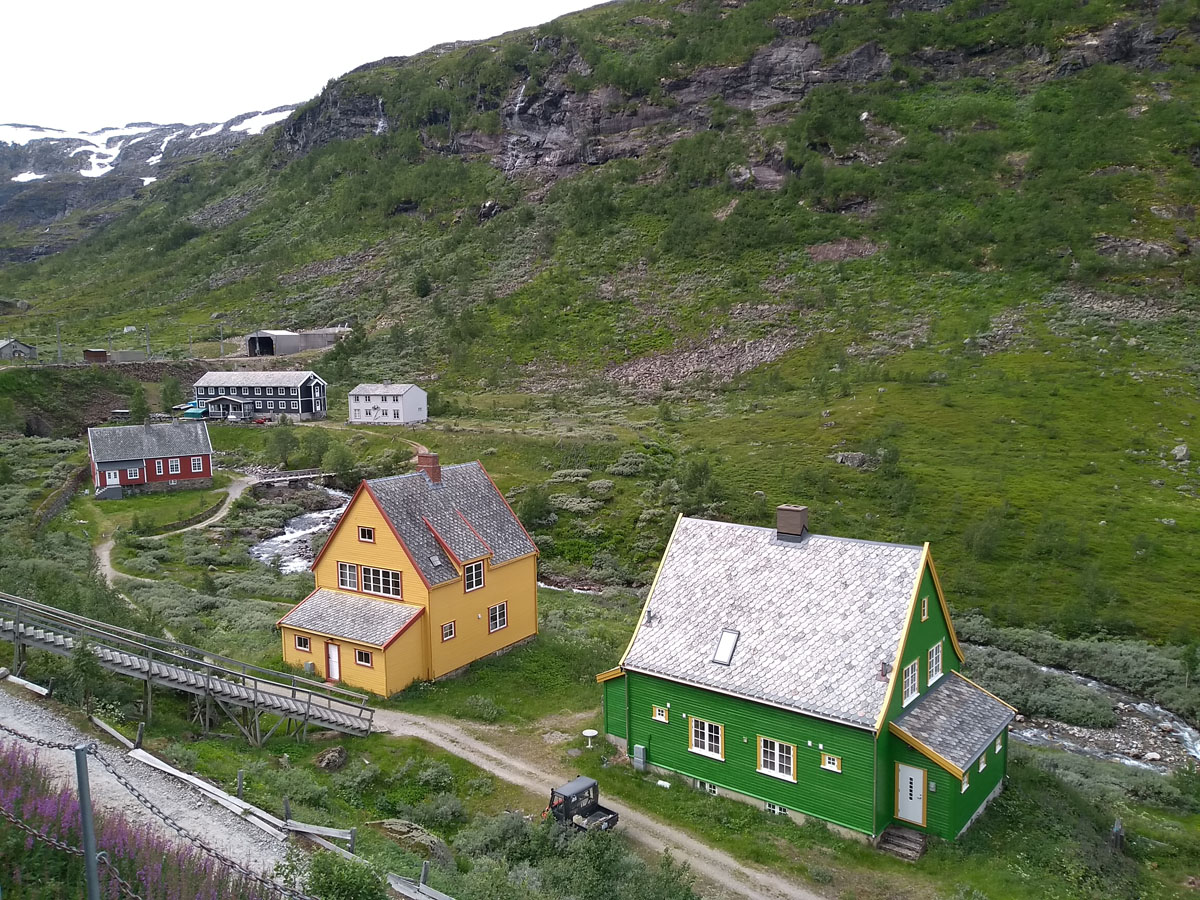 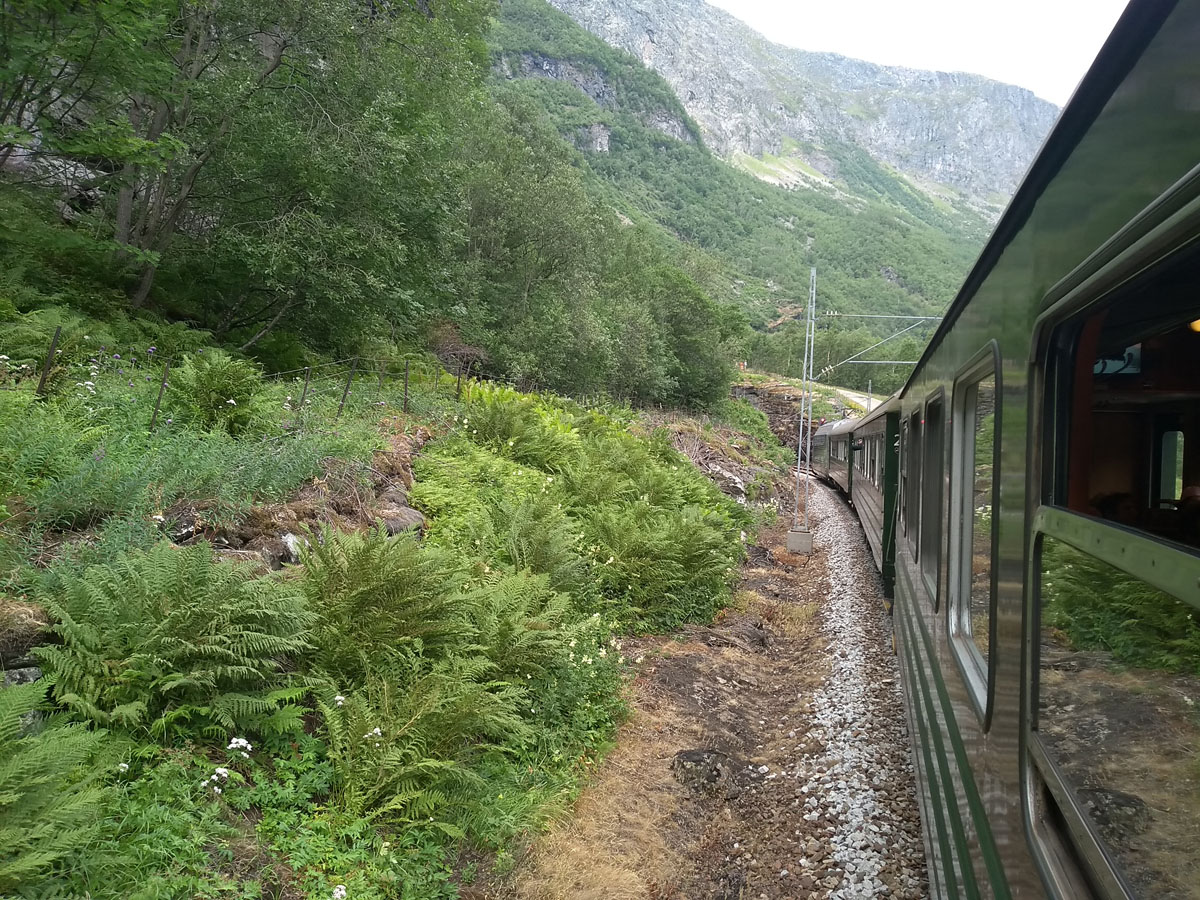 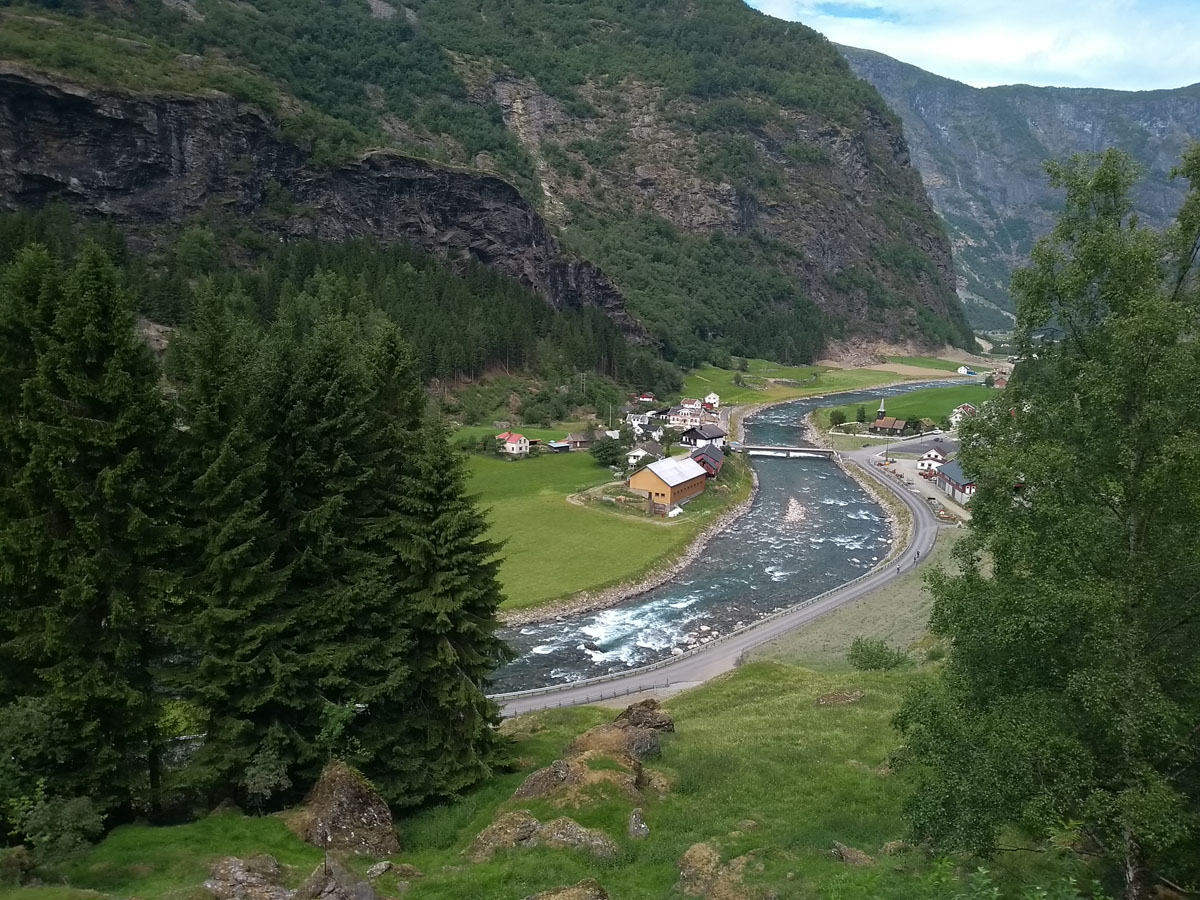 Tomorrow we will drive to a campsite outside Bergen, where we shall be spending the day on Sunday (when just the one cruise ship will be docked!). The campsite has a TV room, so we’ll be able to watch the England v Sweden quarter final, just like #GarethSouthgateWould want us to. C’mon England!