We drove a whole 12 miles from Trier to Longuich. The stellplatz was part of the Feiten vineyard, and we parked overlooking the Mosel. There was space for about 40 vans, and by mid-afternoon the place was full. The pitches were of decent size and the van servicing facilities were very good.

As it was a nice day we went for a walk along the path following the river. The views were superb, as the bank on the opposite side was really steep, and covered with vines. Like the Duoro valley in Portugal these vineyards originate from Roman times, but whereas the banks of the Duoro were stepped, the banks of the Mosel aren’t, so it must be really difficult to look after the vines and harvest the grapes. 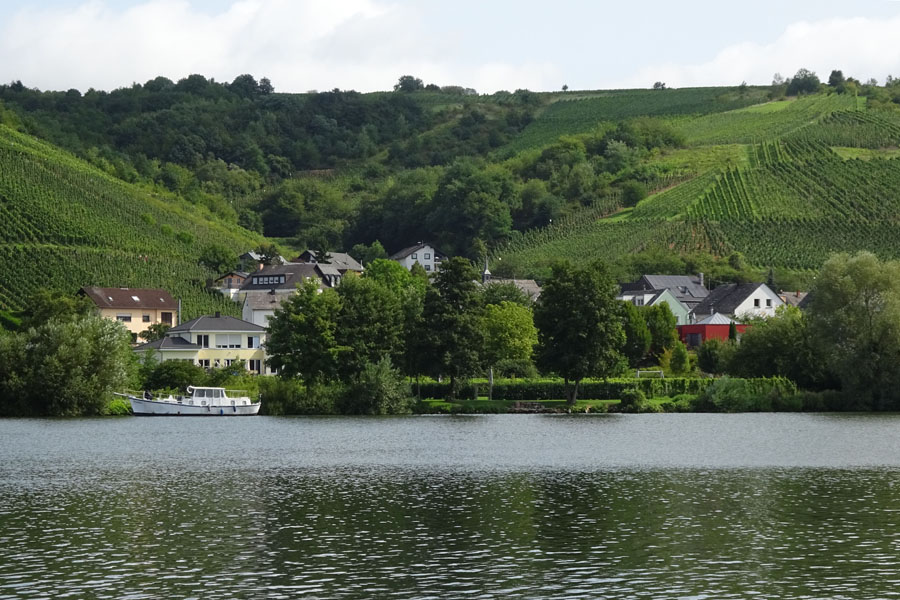 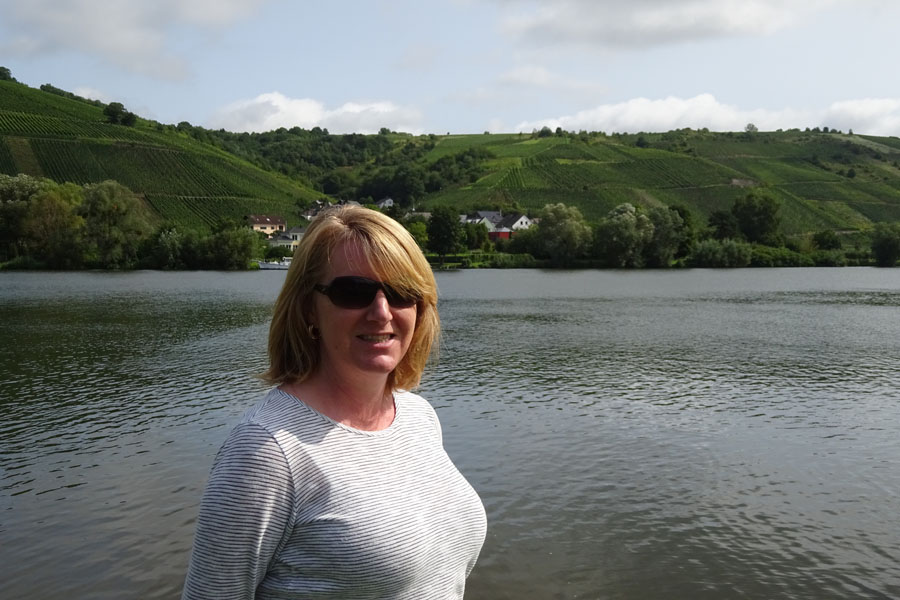 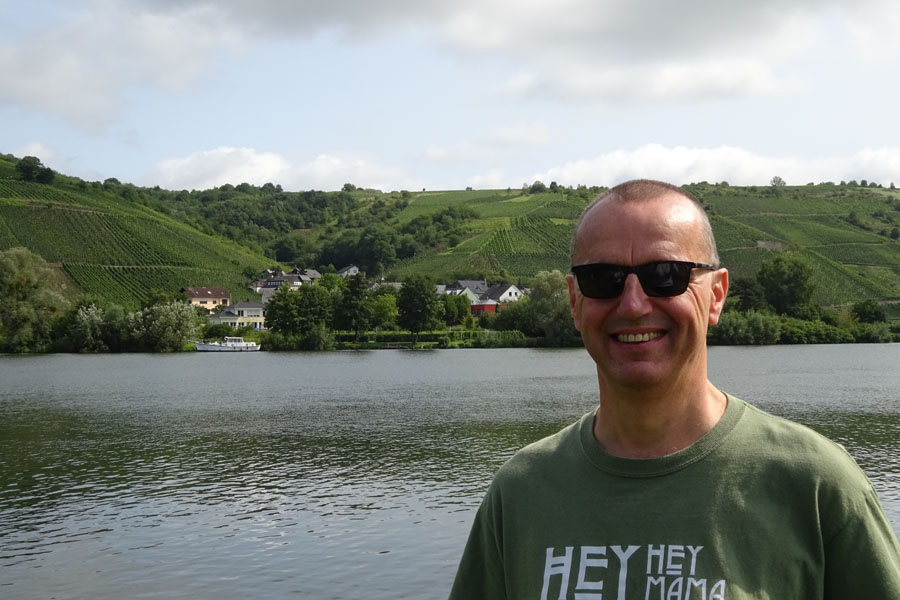 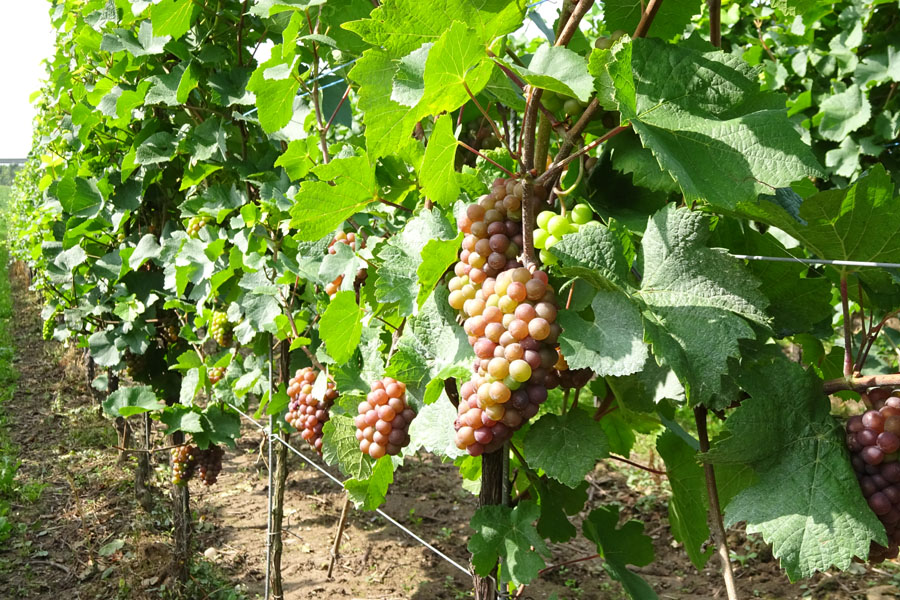 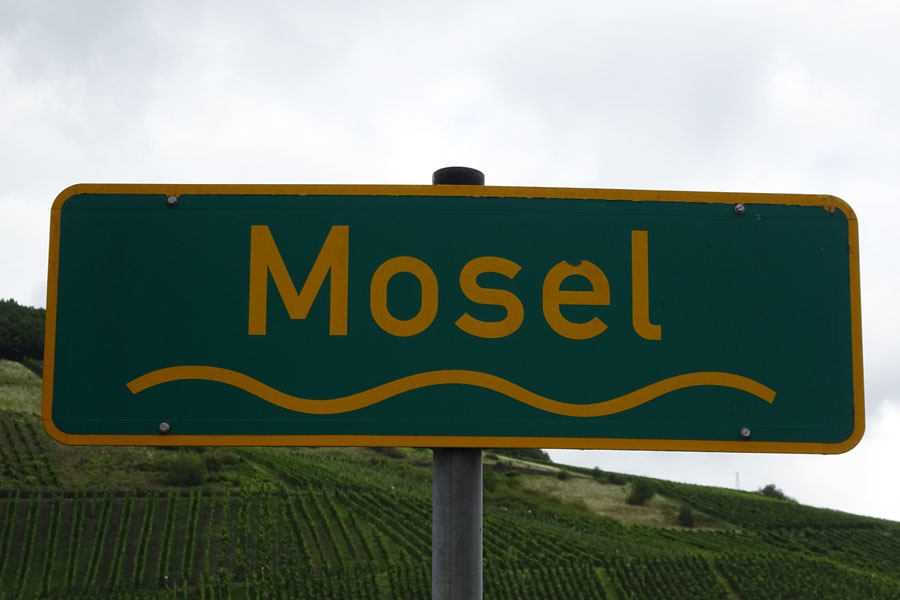 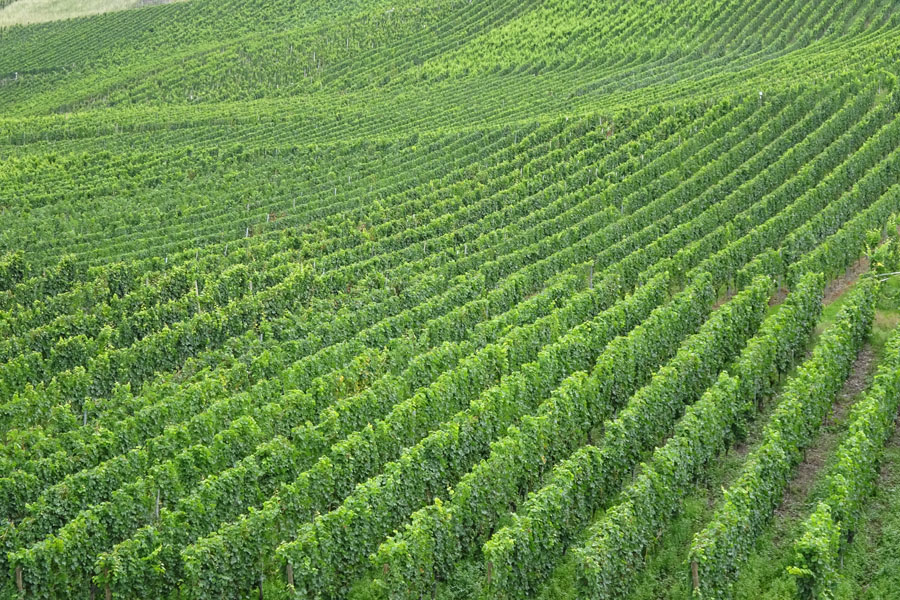 In the afternoon I went for a ride on my bike, though after only a few hundred metres my chain snapped, and I couldn’t find a spare link in my saddle pack so I had to turn back, which was a shame.

As we were staying on a vineyard, it would have been very rude not to have sampled the local produce, so after dinner we wandered over to the bar area and enjoyed a bottle of Riesling. 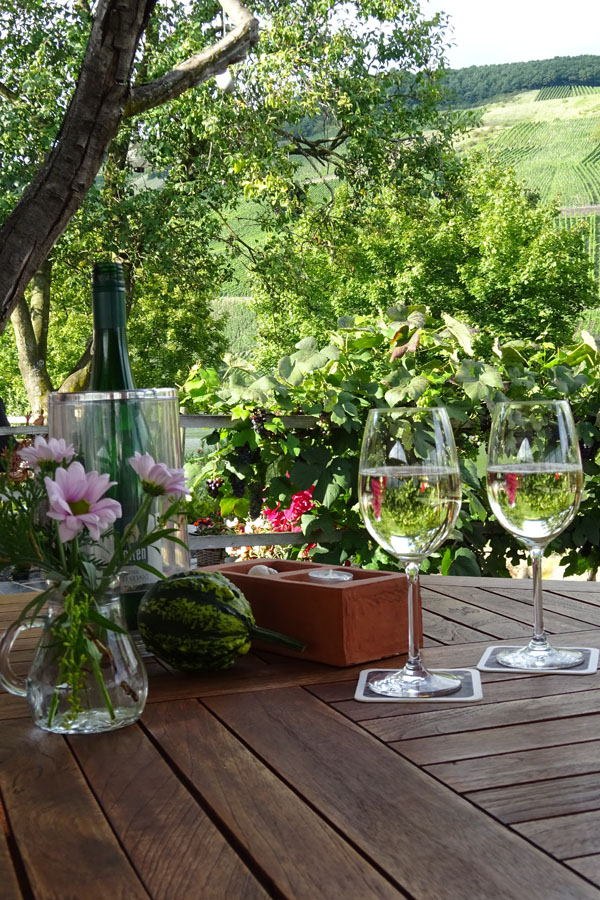 My favourite exhibit in the museum at Trier was a Roman sculpture of the Mosel Boat, depicting a group of men ferrying barrels of wine along the river. This had been excavated from a burial site in Neumagen-Dhron, where there is now a full sized replica on display.

From’t photos on t’interweb Neumagen-Dhron looked to be a really pretty village, so we thought we’d stop there on our way to our next stop in Kesten. Unfortunately for us, the road through the village was rather narrow, and parking spaces were clearly at a premium. There were no spaces at all for a van as big as ours, and the parking area on the waste land on the outskirts of the village had signs saying “Wohnmobiles Verboten”, so we didn’t stop (though Carol did manage to take a sneaky photo of the replica Mosel Boat as we drove past). 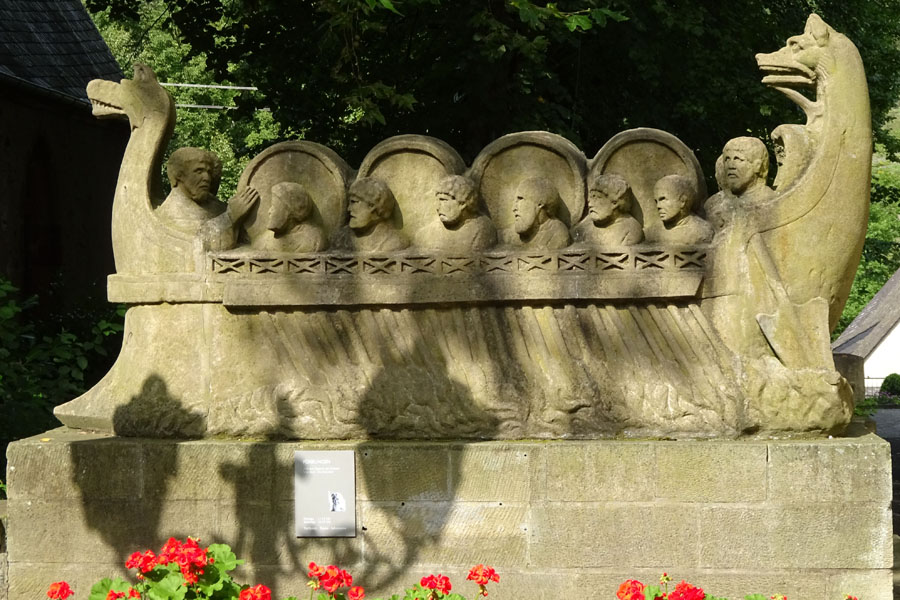 The stellplatz at Kesten was right by the Mosel, and we bagged a space overlooking the river. There wasn’t much going on in Kesten, so we spent the afternoon sat outside the van reading. 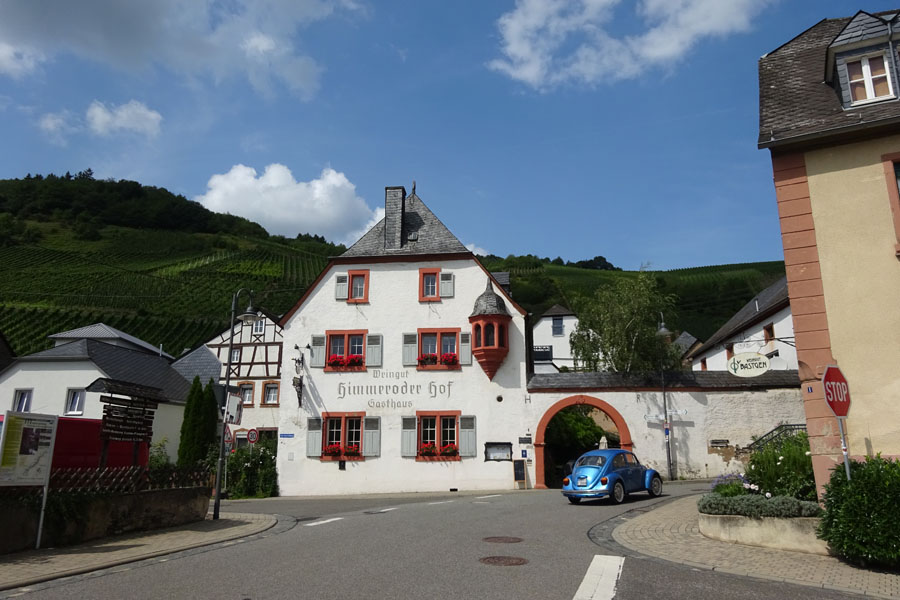 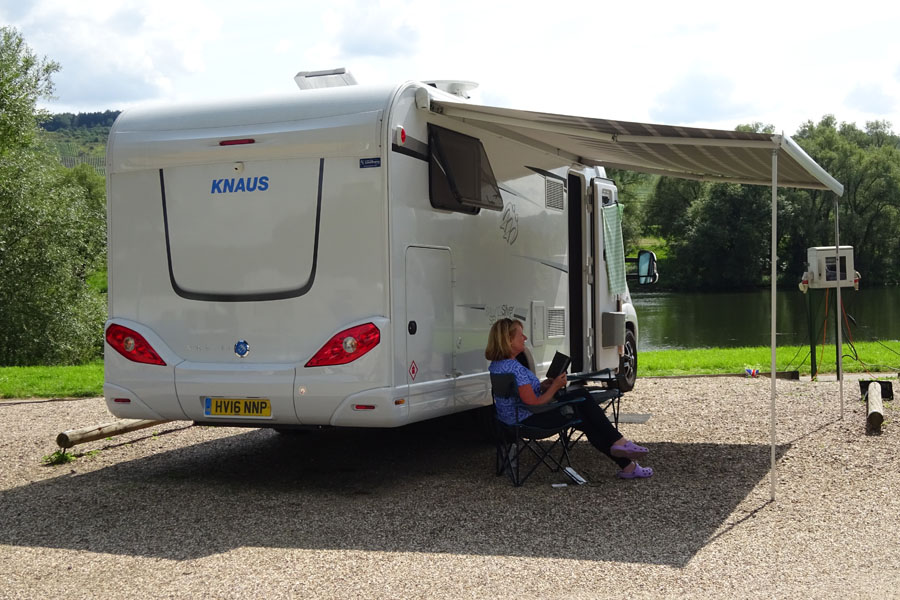 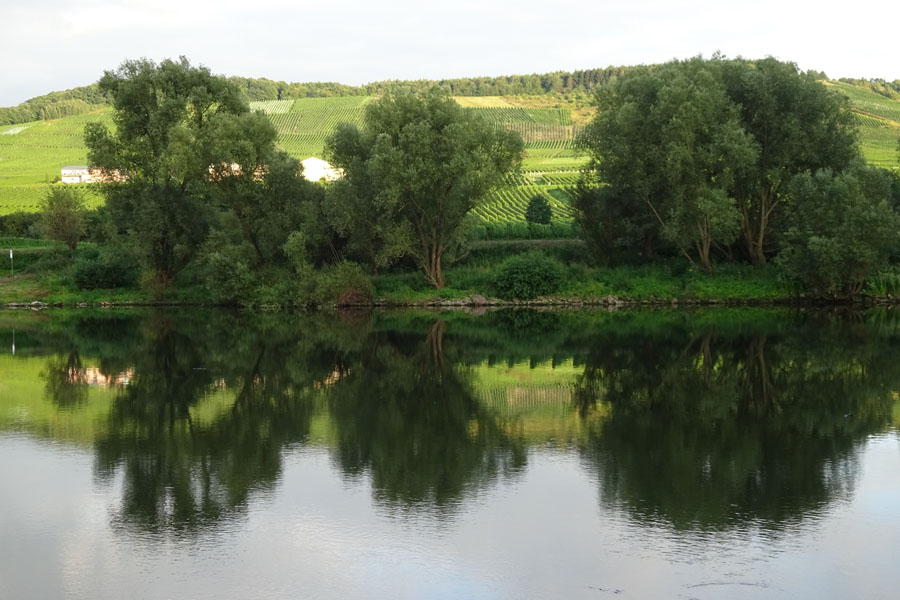 After enjoying a rare lay in, we set off for Bernkastel-Kues. It’s one of those historic German towns with photogenic medieval-looking timber buildings and narrow pedestrianised lanes.

After parking up in a motorhome park by the river, we crossed the river and enjoyed an hour or so walking around the town and enjoying a coffee. A quick check on Google Maps showed that there was a bike shop nearby, so we called in on the way back to the van to buy a couple of quick links to fix my bike chain (€15 – ouch!). 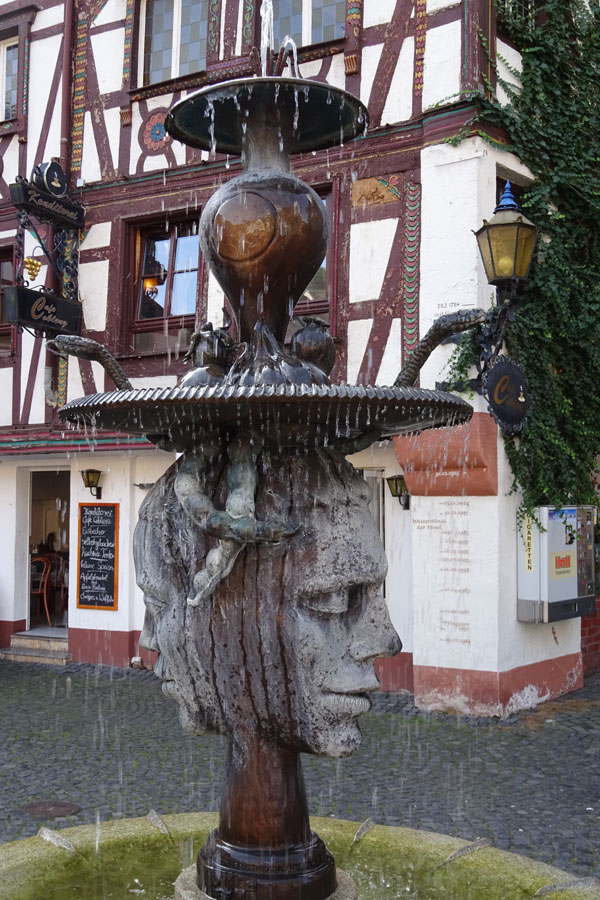 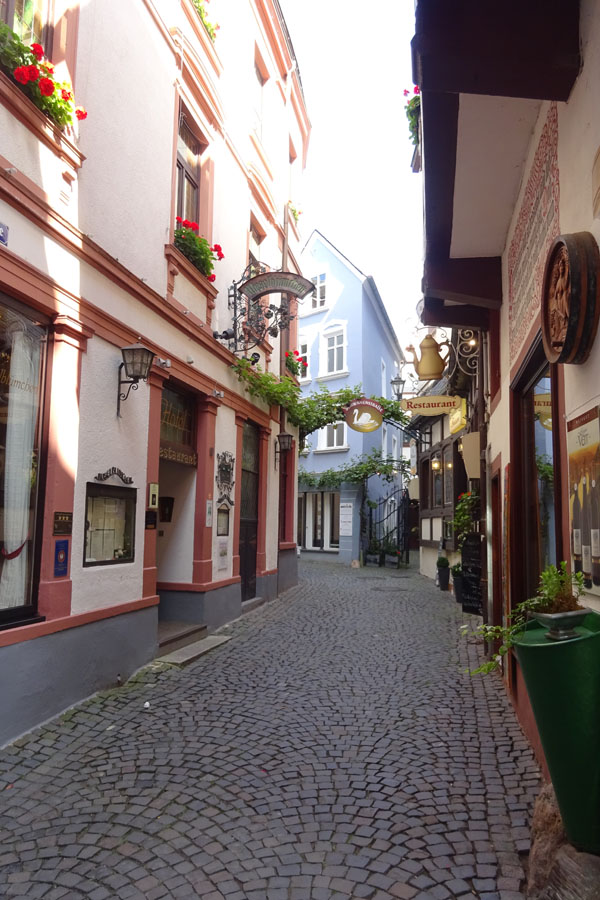 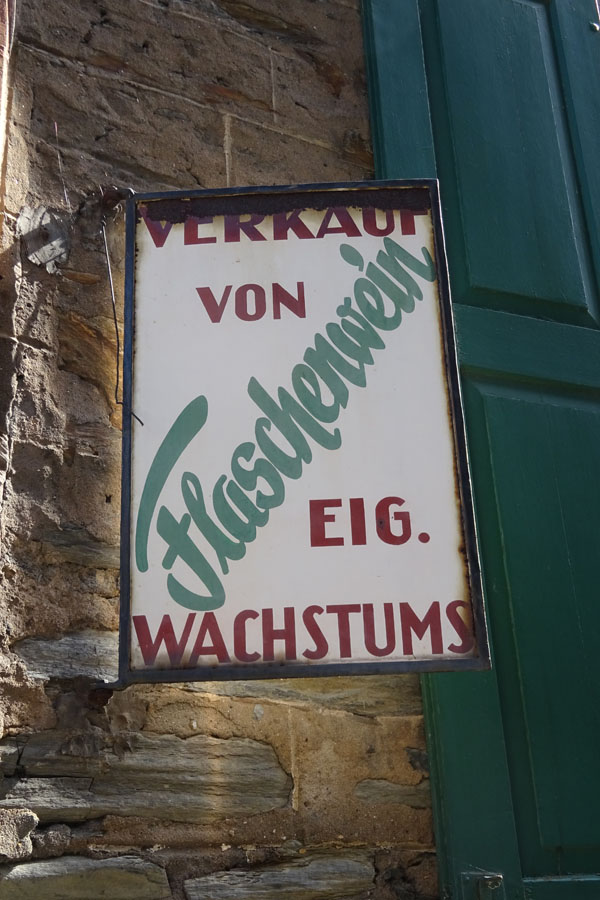 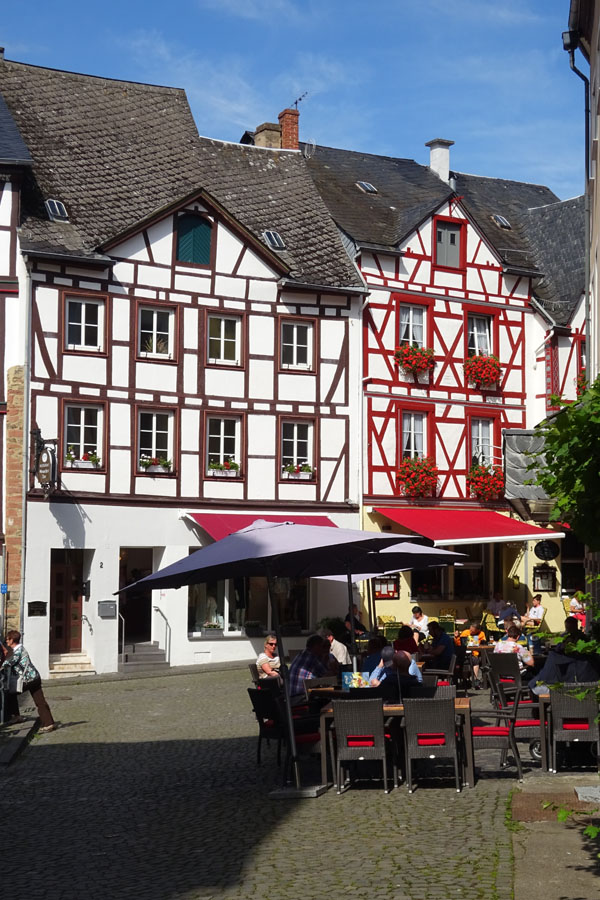 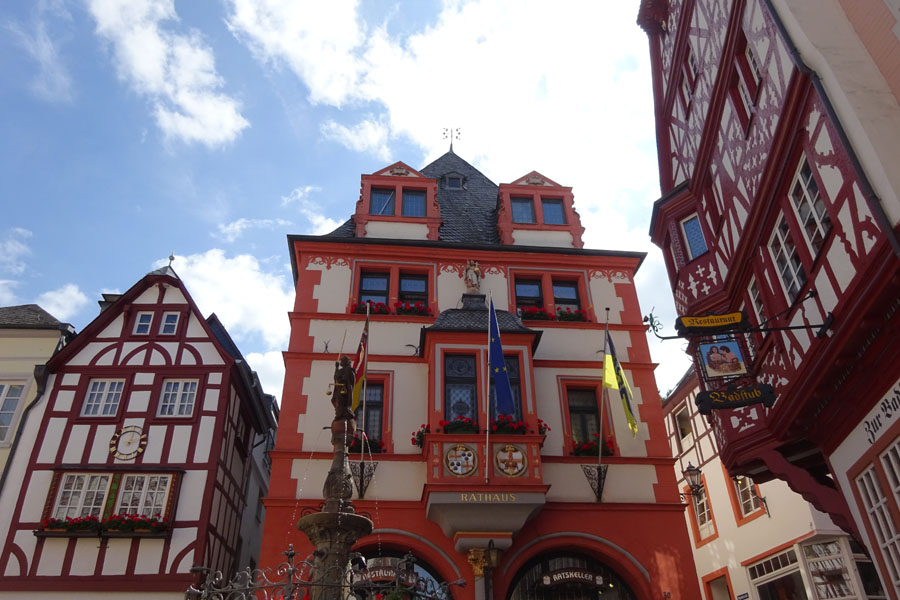 The stellplatz at Reil was our stop for the night. Parked up on the bank of the Mosel, we had another wonderful view from our windscreen. 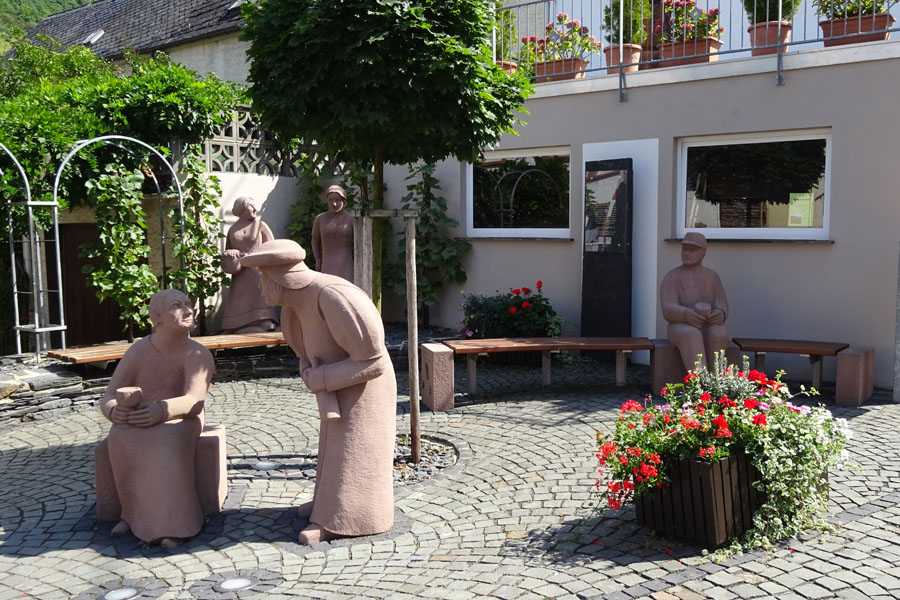 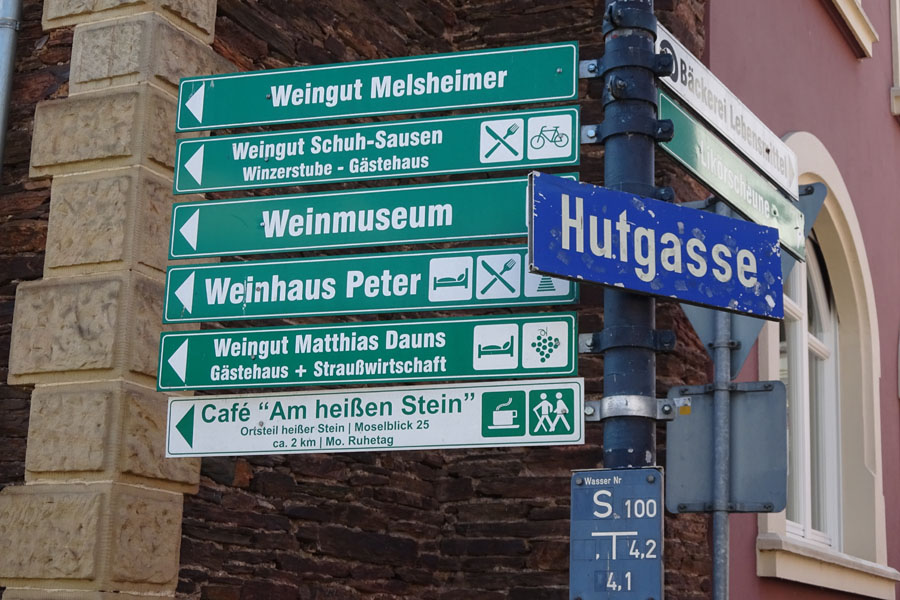 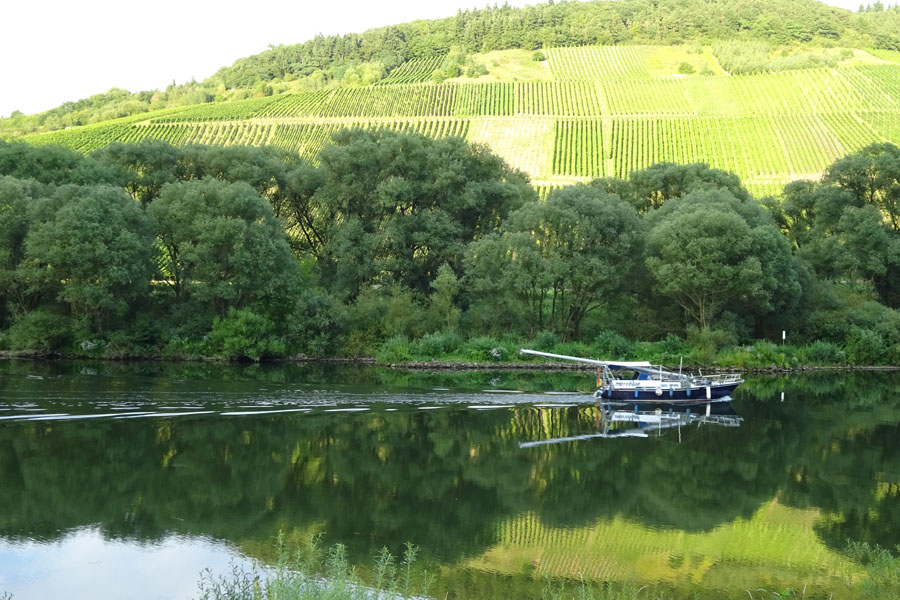 We’ve been finding laundry facilities difficult to come by in Germany, so the only option has been to book into a campsite. At this time of year that can work out pretty expensive, as the off-peak season at most ACSI (discount scheme) sites doesn’t start until 1st September, so we were fortunate to find an ACSI site which had just switched to off-peak pricing where the pitch would cost a reasonable €17 for the night.

We turned up early and Carol got three loads of washing on. With the washing hung up to dry, and after a spring clean of the van, we spent the afternoon chilling out, reading and watching our neighbours with caravans and tents setting up camp, and went for a walk into town in the evening. 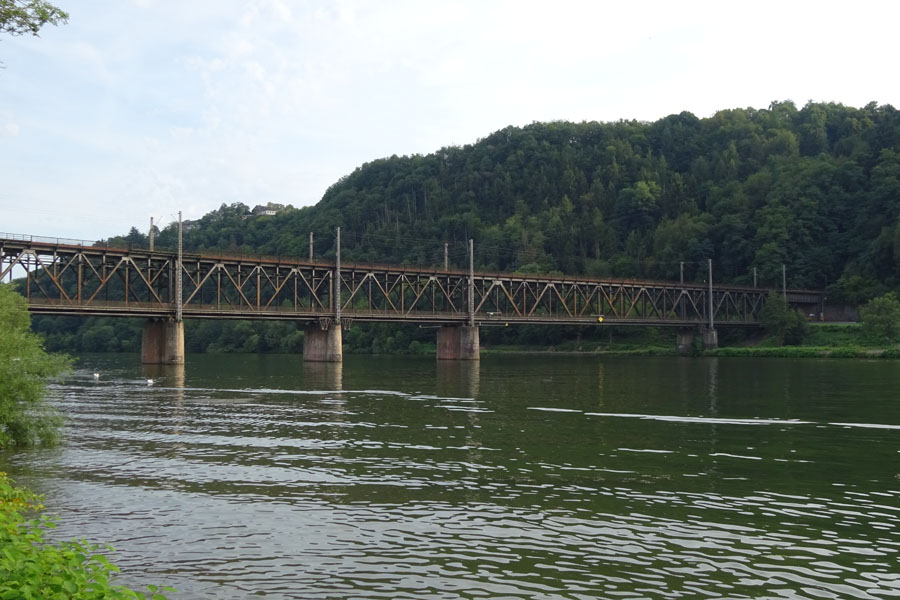 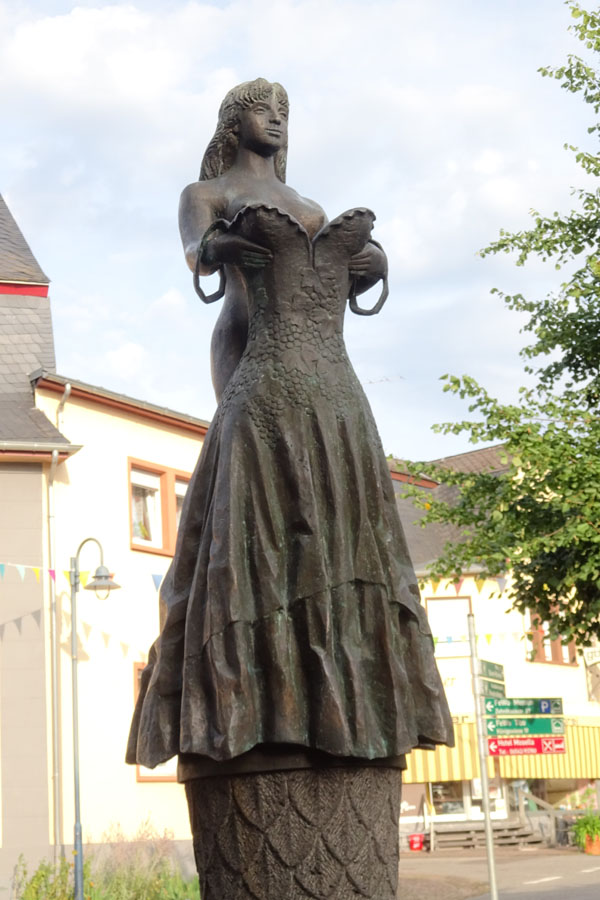 Our next stop was just three miles away (though I missed the turning into the stellplatz, which increased the mileage by 33%). We parked up on a hard standing pitch, which we much prefer to parking on grass.

St Aldegund is a pretty village with old timber buildings, so we enjoyed our walk there. 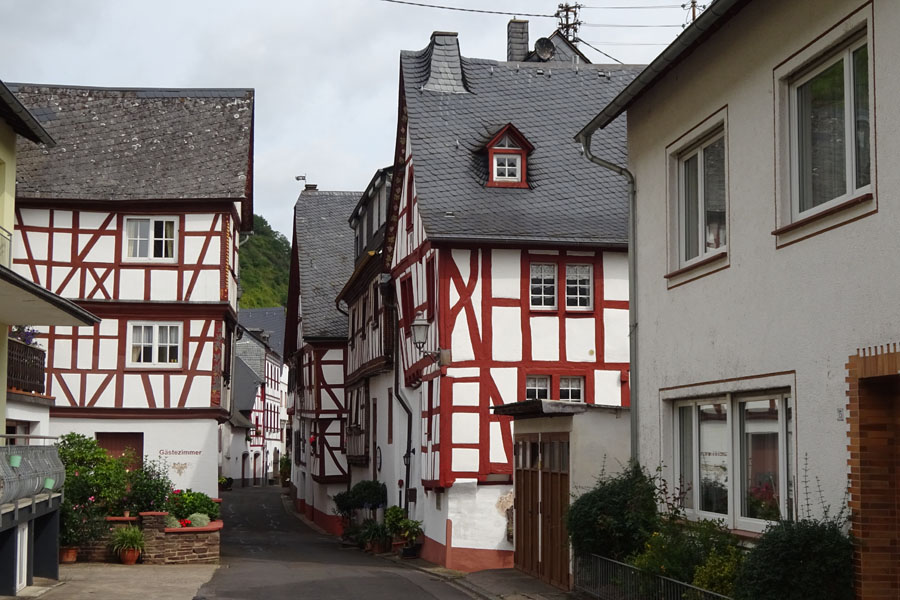 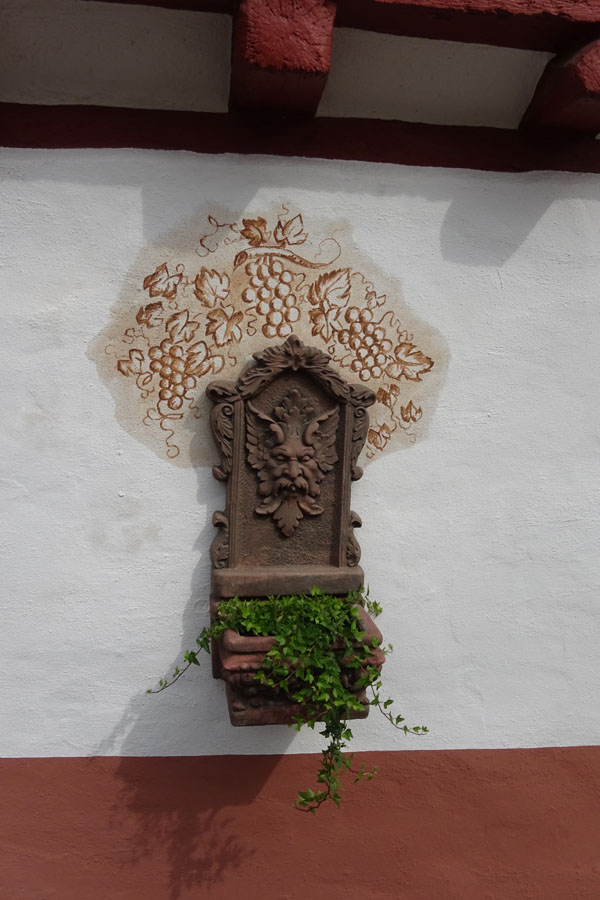 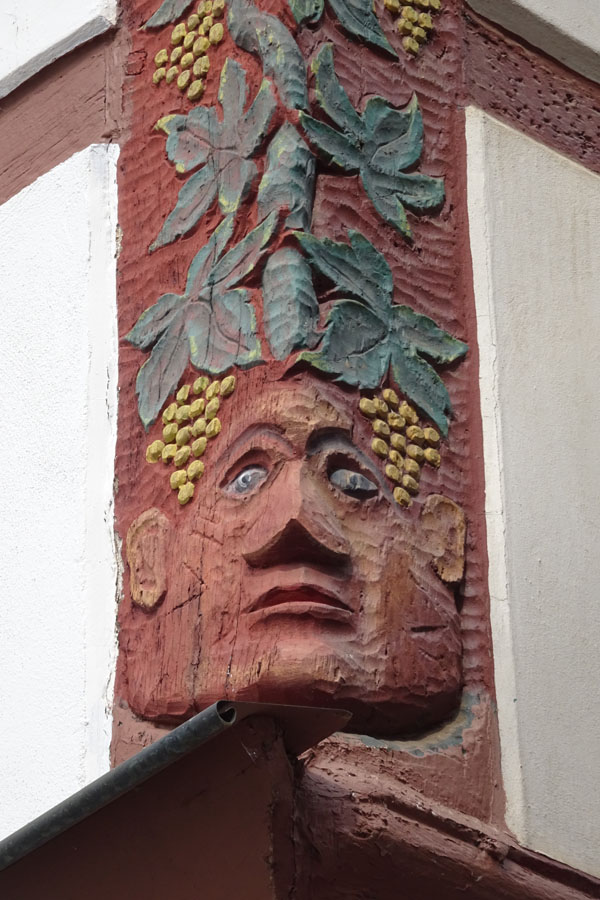 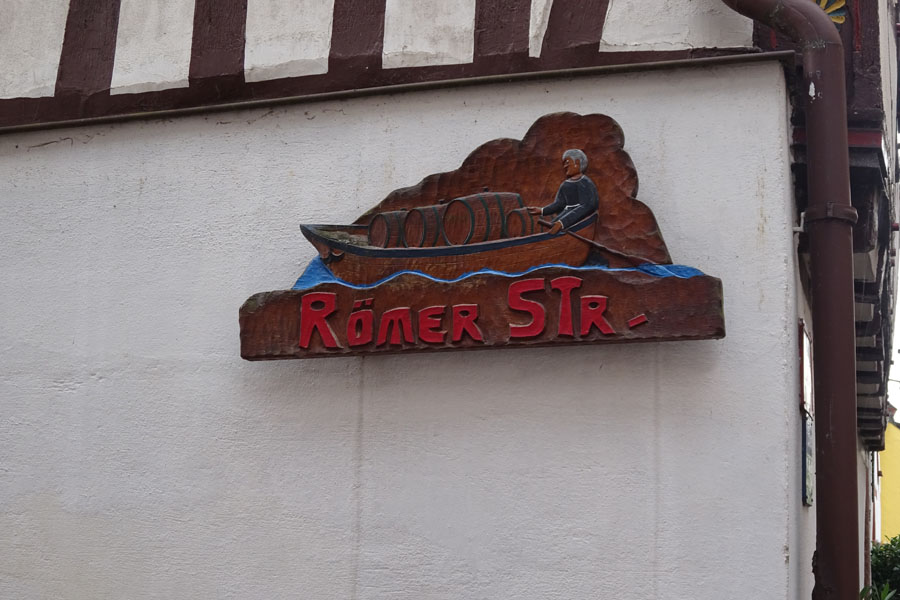 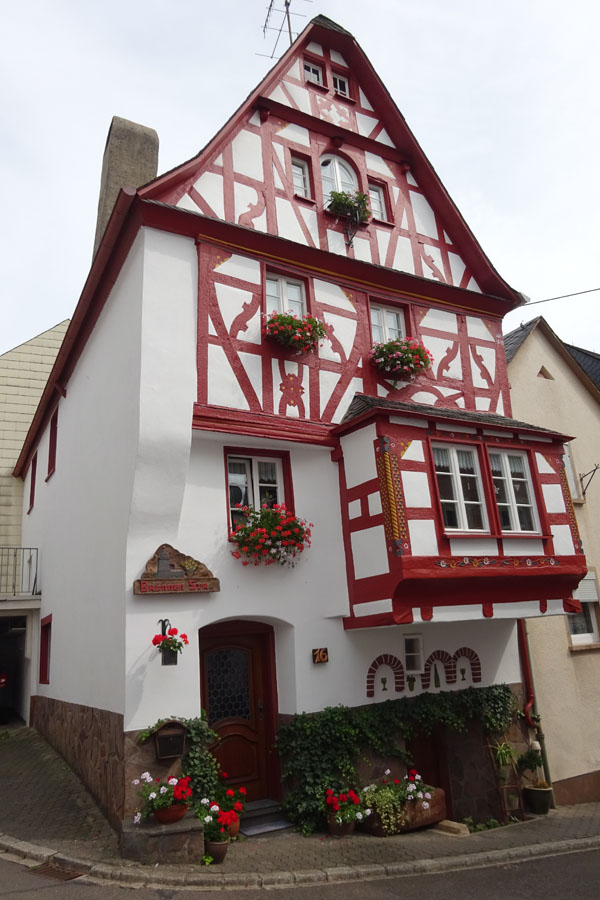 As we were parked right next to the river, we could watch all the boats going back and forth. It really is a busy river, with lots of enormous barges carrying what looks like coal and aggregates. Then there are quite a few tourist boats, and also some individuals in their motor boats.

There was a raised railway track on the opposite bank of the river, with both passenger and freight trains trundling along. Unfortunately for us, the freight trains ran throughout the night, and seemed much louder than during the day, no neither of us had a good night’s sleep.

Our last stop in the Mosel Valley is one of two stellplätze in Ernst. We chose a good pitch and made ourselves at home. It was good to see a couple of British vans here as well, both of which were on their way back to the UK, and it was nice to chat to some fellow Brits and exchange hints and tips – the first compatriots we’ve spoken to since arriving in Germany. Given how beautiful Germany is, I find it amazing how few British holiday here outside of the big cities like Berlin. One of the couples hadn’t seen any other British vans for five weeks before seeing us.

The Ernst stellplatz is part of a vineyard, situated next to the ‘Weingut’ selling their wine to the public. When paying for the pitch, it would have been very rude not to at least buy a bottle, so I came away with a dry Riesling which tasted great with our evening meal.

The weather turned really muggy yesterday and we had a massive thunderstorm last night. It’s quite humid again today, so there could be a repeat later on.

We’ve walked into the village here, and to the next village, and feel that after a week we’ve ‘done’ the Mosel Valley now. It’s a lovely part of the world, and is definitely worth a visit. 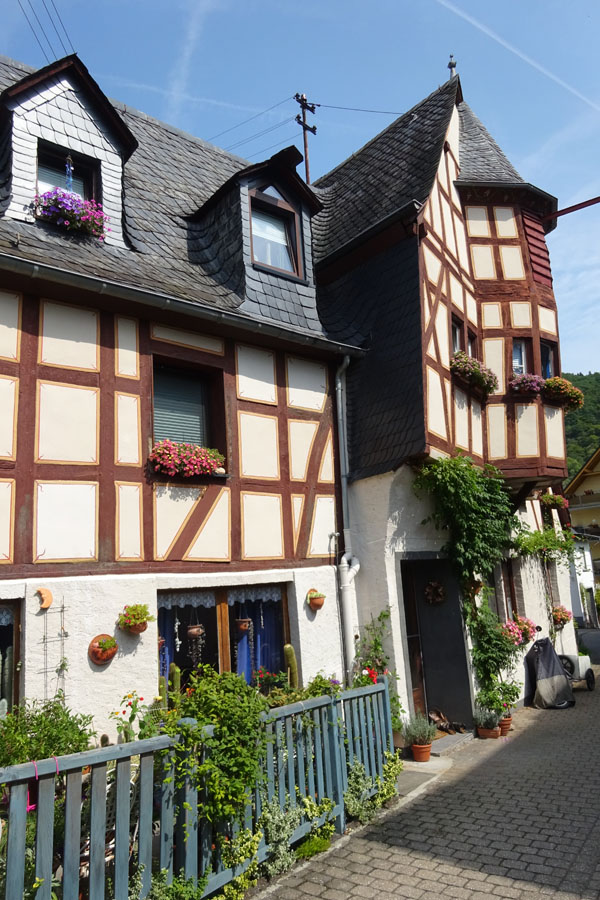 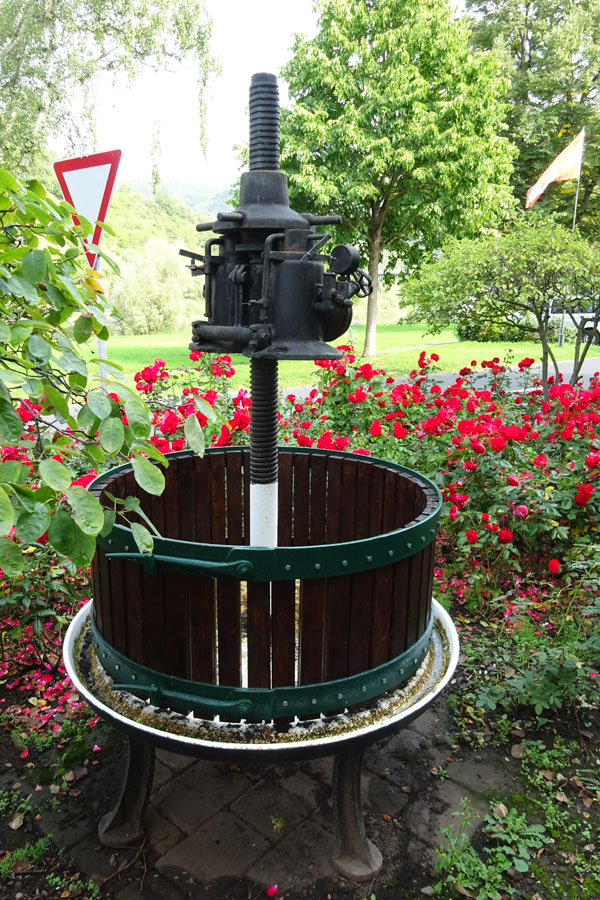 Tonight we’re going to treat ourselves to dinner at a local restaurant with a lovely looking menu, making a nice change not to have to cook and do the washing up.

Tomorrow we will stop at Koblenz, where the Mosel meets the Rhine, and from there we’ll take about a week or so to drive north east to Potsdam and Berlin.