The Moskenes to Bodø ferry crossing took around three hours. Although the sea was calm, it was way too cold and windy to spend much time on deck, so we whiled away the time indoors. We were parked right at the front of the ferry and so were the first vehicle to drive off.

Our camperstop for the night was the Esso petrol station by the port, which had dedicated motorhome parking and services for 100 NOK. Not very salubrious, but it was nice and quiet considering it was so close to the port.

The next morning we set off in the rain to Saltstraumen, some 30km away on the south side of the fjord. It’s where there’s a short stretch of water – 3 km long, 150 metres wide and 31 metres deep – connecting Skjerstad fjord to the sea. There’s a height difference of one metre, which causes the strongest tidal current in the world, running as fast as 40 kmh at its peak, causing whirlpools or maelstrom to form.

We parked up under the bridge and walked half way across it to check it out. As it was between tides, the current wasn’t at its peak, though there were still lots of small whirlpools to be seen. 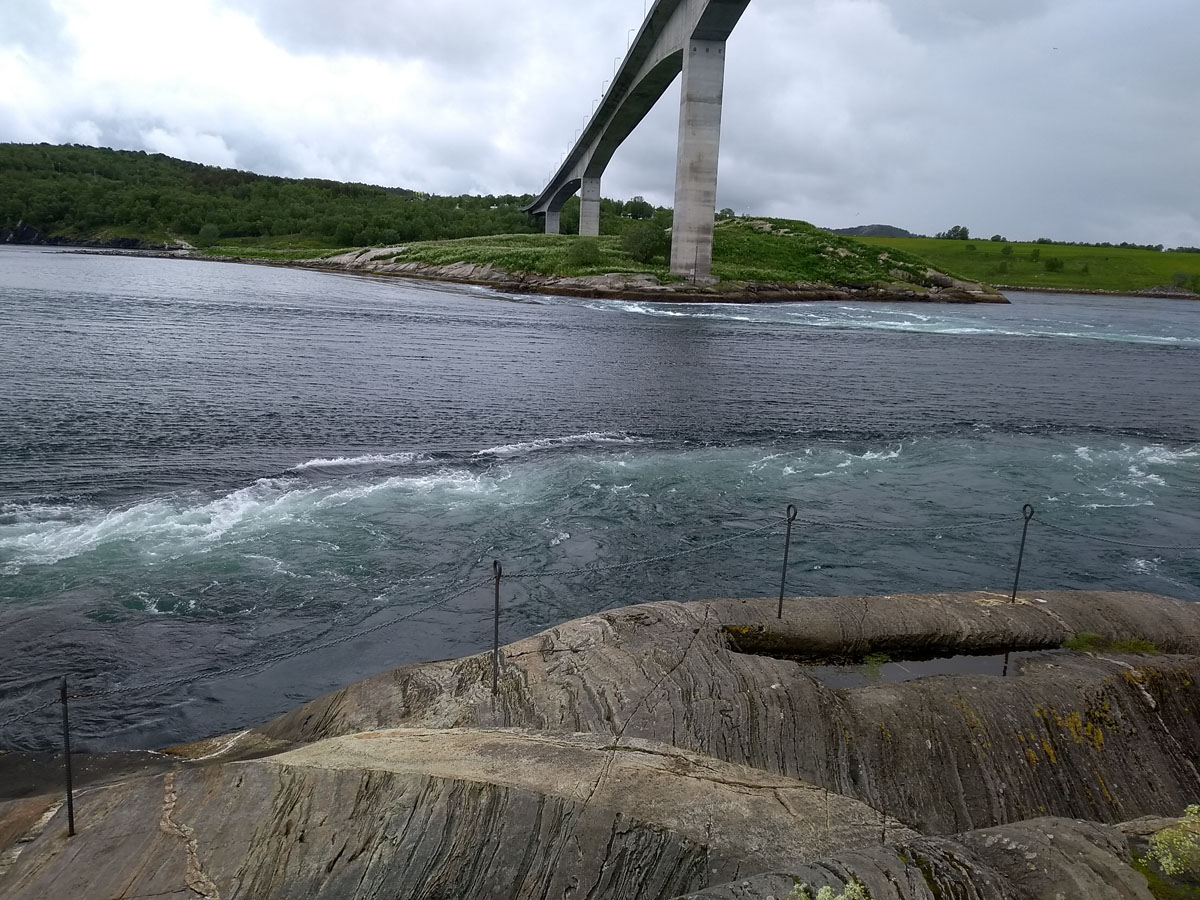 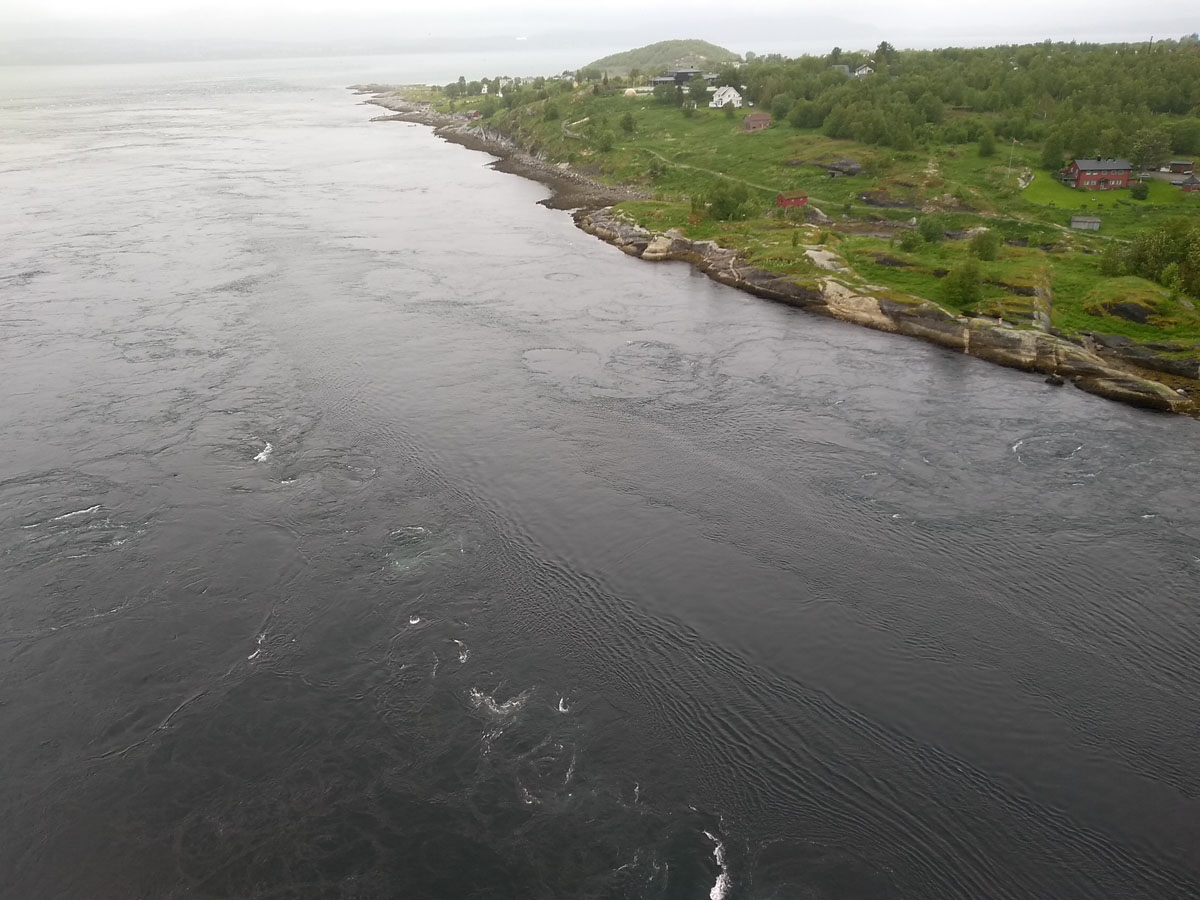 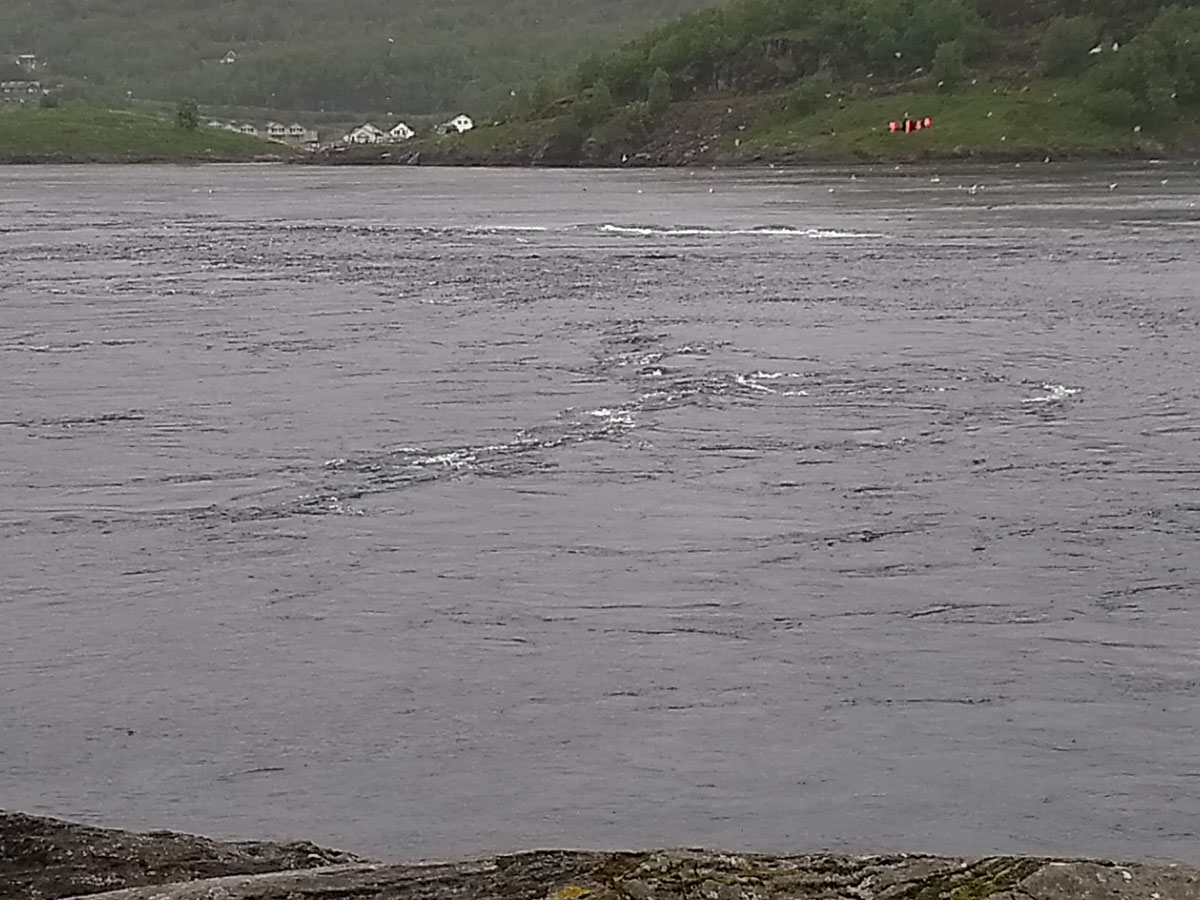 It’s also a popular place to go fishing, as the current attracts lots of cod, pollock, mackerel and many other species, and catching a fish here was on my list of things to do. Apparently, the best time to catch a fish is a couple of hours ahead of the high tide, before the current speeds up too much. It was still tipping it down, but I went anyway and got soaked. I did manage to catch what I think was a pollock, which was a bit on the small side but big enough for a meal for two. Back at the van I dried myself off before scaling, gutting and then filleting the fish before popping it in the freezer for another day. Unfortunately my filleting skills leave much to be desired, and I expect daughter Sarah (a chef) would have scored me 3/10 when in a generous mood. I’ll have to check out YouTube before doing that again. 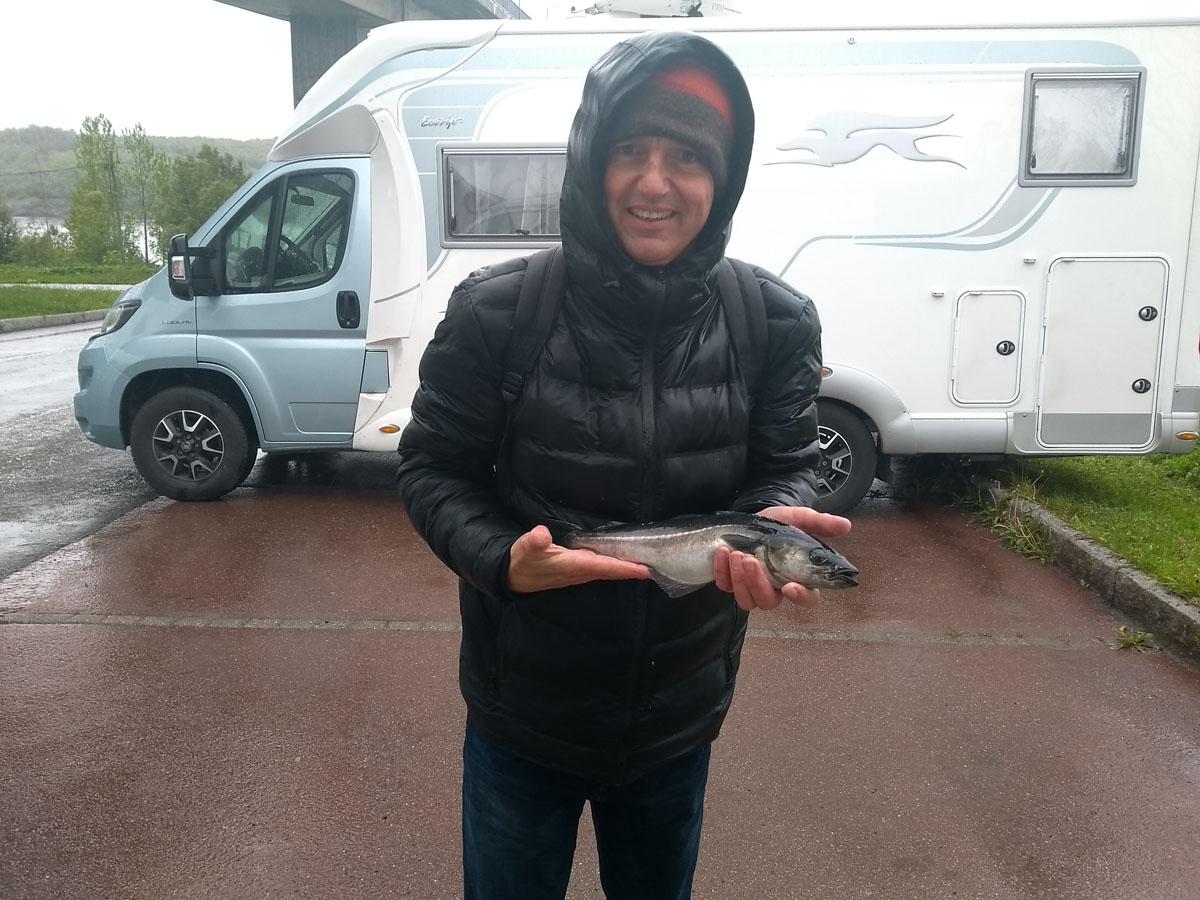 We did walk back down to the shore at high tide and the current was really fast, but as it was still pouring down we didn’t hang around for long.

We’re now on the long journey south heading for Trondheim. We could have taken the scenic route along the coast which would have involved catching seven ferries, but as the cold and rainy weather has continued there seemed little point in doing that, so instead we’ve opted to drive down the E6 which will take us 700 km to Trondheim. This is the long, narrow part of Norway, and there’s not much to see or do that doesn’t involve hiking in the rain, so we’ve just been driving along admiring the passing scenery, thinking how great it would look if the sun were shining.

We must have driven past hundreds of warning signs for moose over the past three weeks, but they’ve been very elusive. However we finally spotted one near Saltstraumen, grazing at the side of the road, and we’re hoping to see more as we drive around the fjords.

We did spend a night on the Arctic Circle. Crossing this means that we won’t now have a chance of seeing the midnight sun, which is a bit of a shame but no big deal. 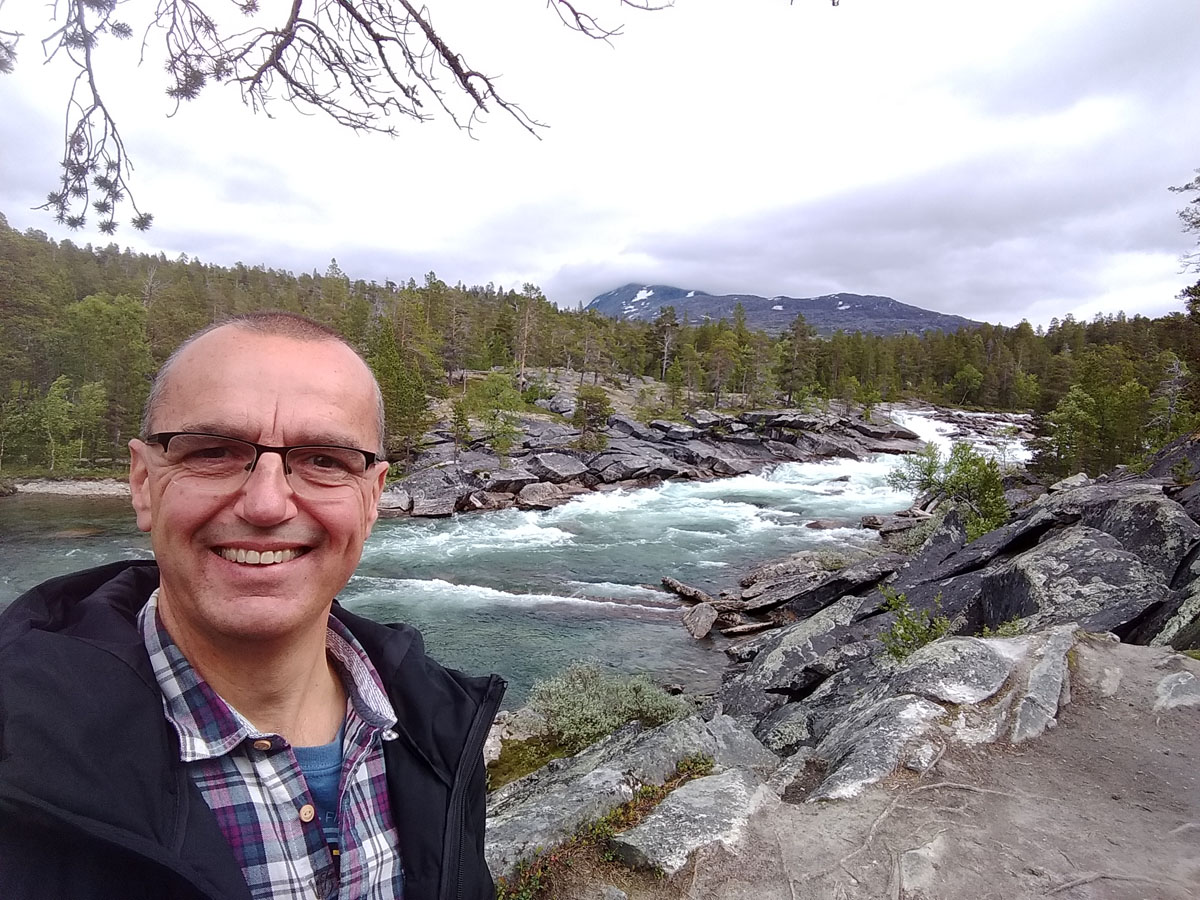 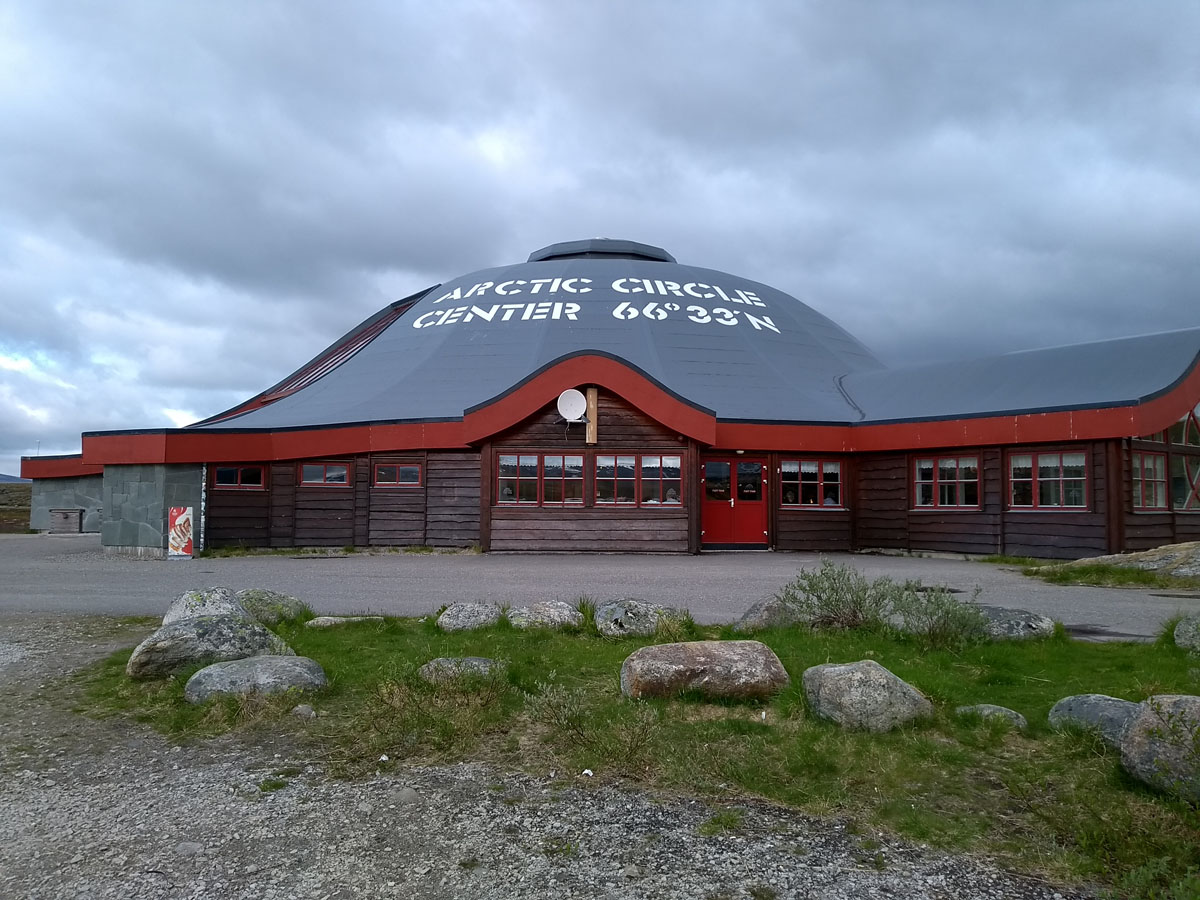 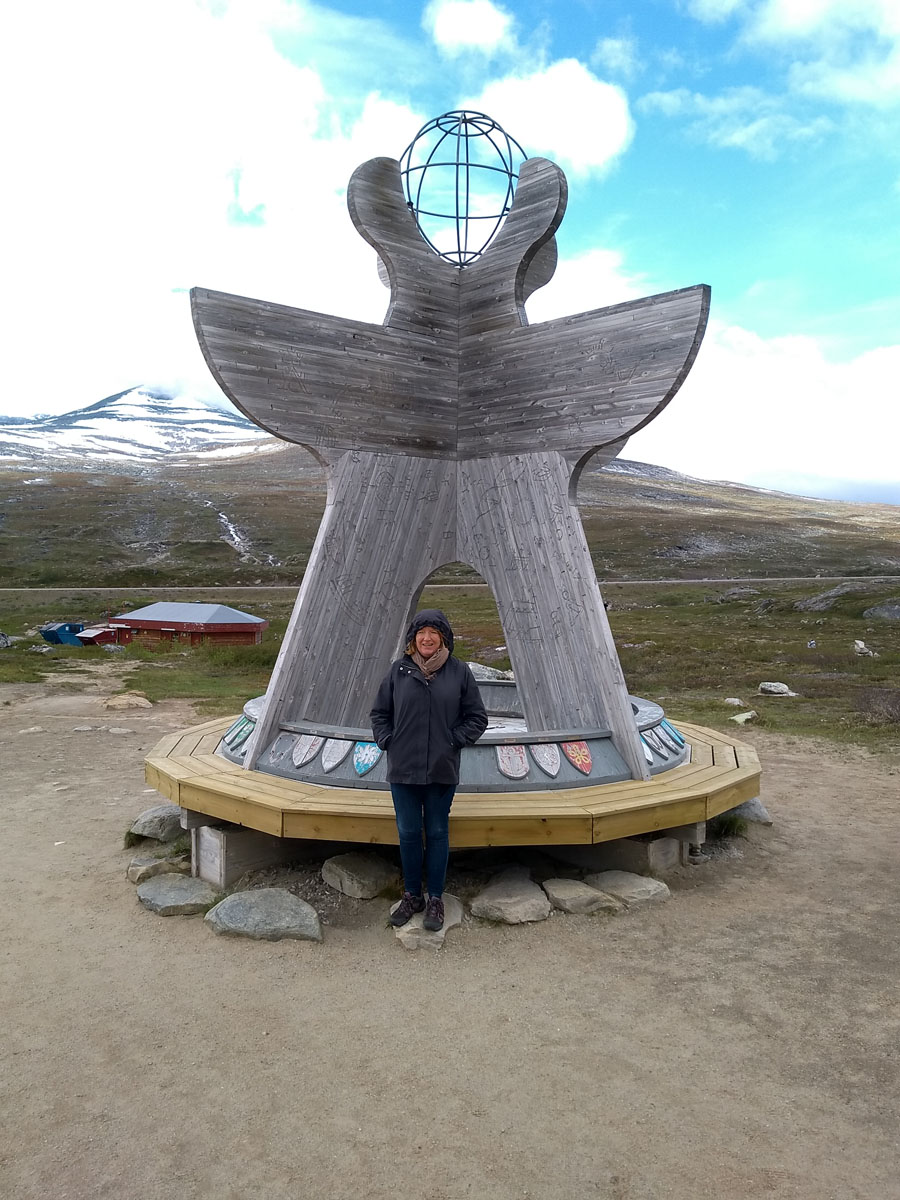 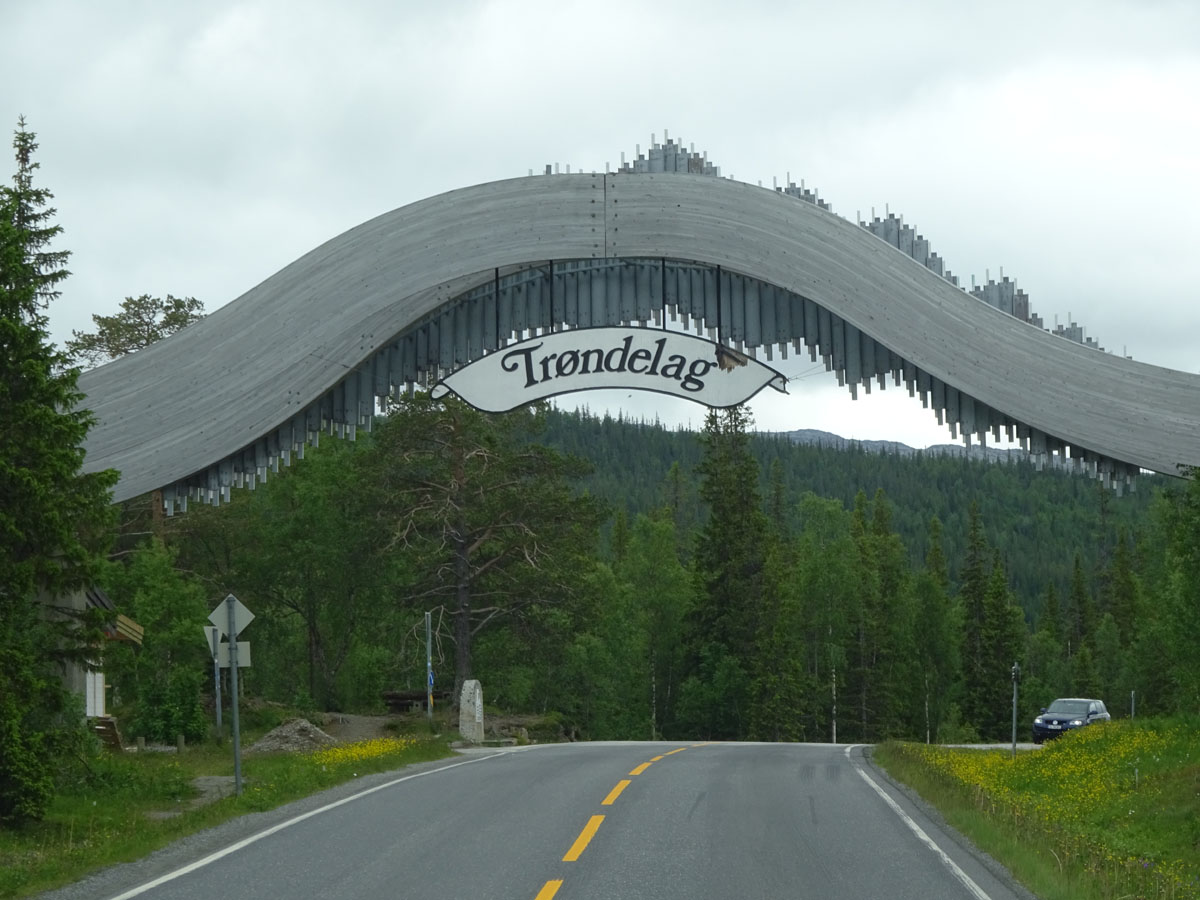 The weather will hopefully improve soon, but if it doesn’t then Carol and I are both agreed that there’s no point in hanging around waiting. Instead, we’ll just go to see the things we want to see and make the best of things, even if this means that we don’t spend as much time in Norway as we would have liked.

Tonight we’re wild camping in a village called Grong, and tomorrow we should reach Trondheim, where we’ll spend the day on Tuesday.