We left the campsite at Bleik four days ago, but it seems much longer than that. The weather had become wet and very windy, so we didn’t get to see any puffins or white-tailed sea eagles unfortunately. Leaving Bleik we retraced our steps along the same roads back to Sigerfjordveien, and the view was different coming back the other way.

This time we parked for free in a picnic area overlooking the beach, instead of paying 100 NOK to park on the marina. We were a bit naughty though as we drove onto the marina before leaving, and hooked the van up to the mains so that Carol could dry her barnet.

The E10 is the main road running through the Lofoten Islands, and it’s another of those designated scenic routes. Being a single lane road, I pulled over a few times to let traffic pass. Going through mountainous terrain, there were lots of tunnels to navigate, all of which were toll-free. (In Norway tolls are introduced to pay for new infrastructure, but are abolished once the tolls have covered the original investment – there’s zero chance of anything like that happening in the UK.) 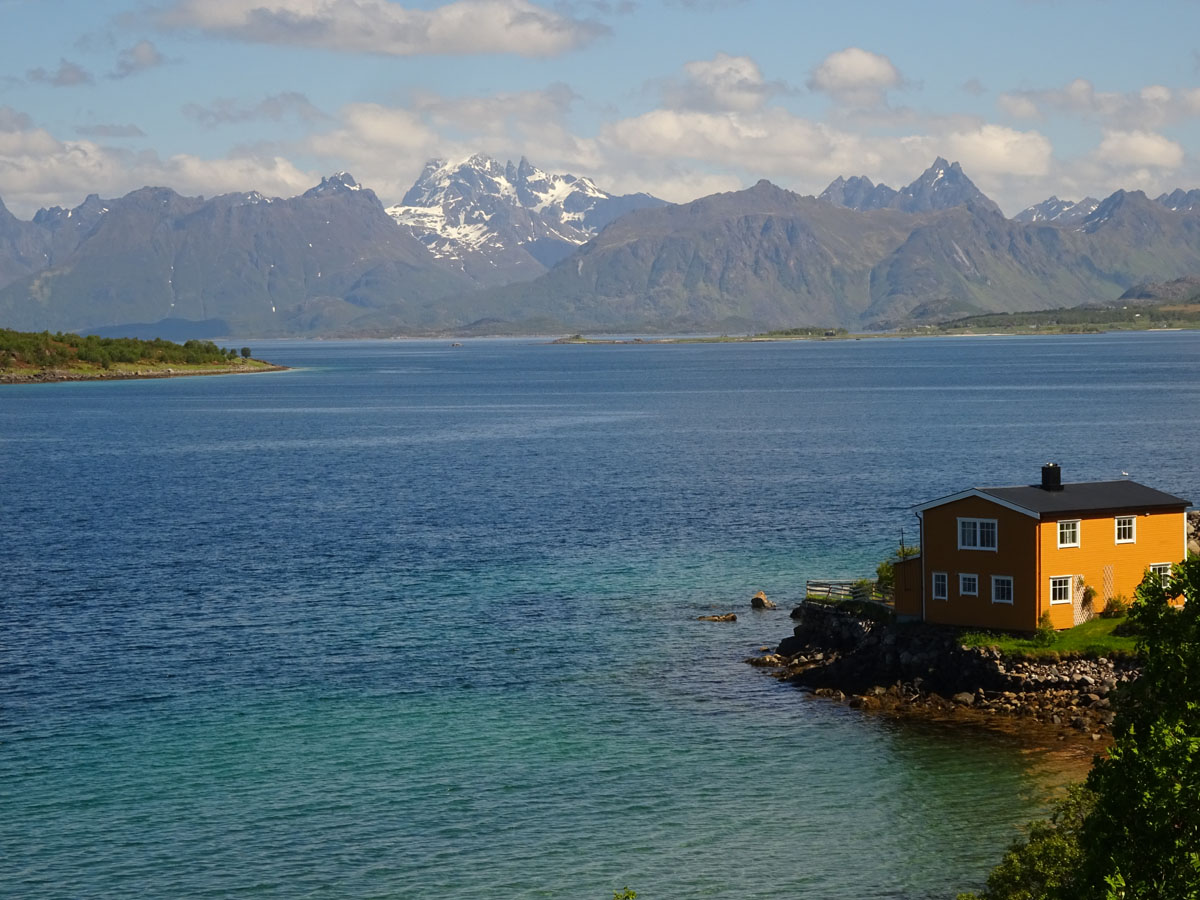 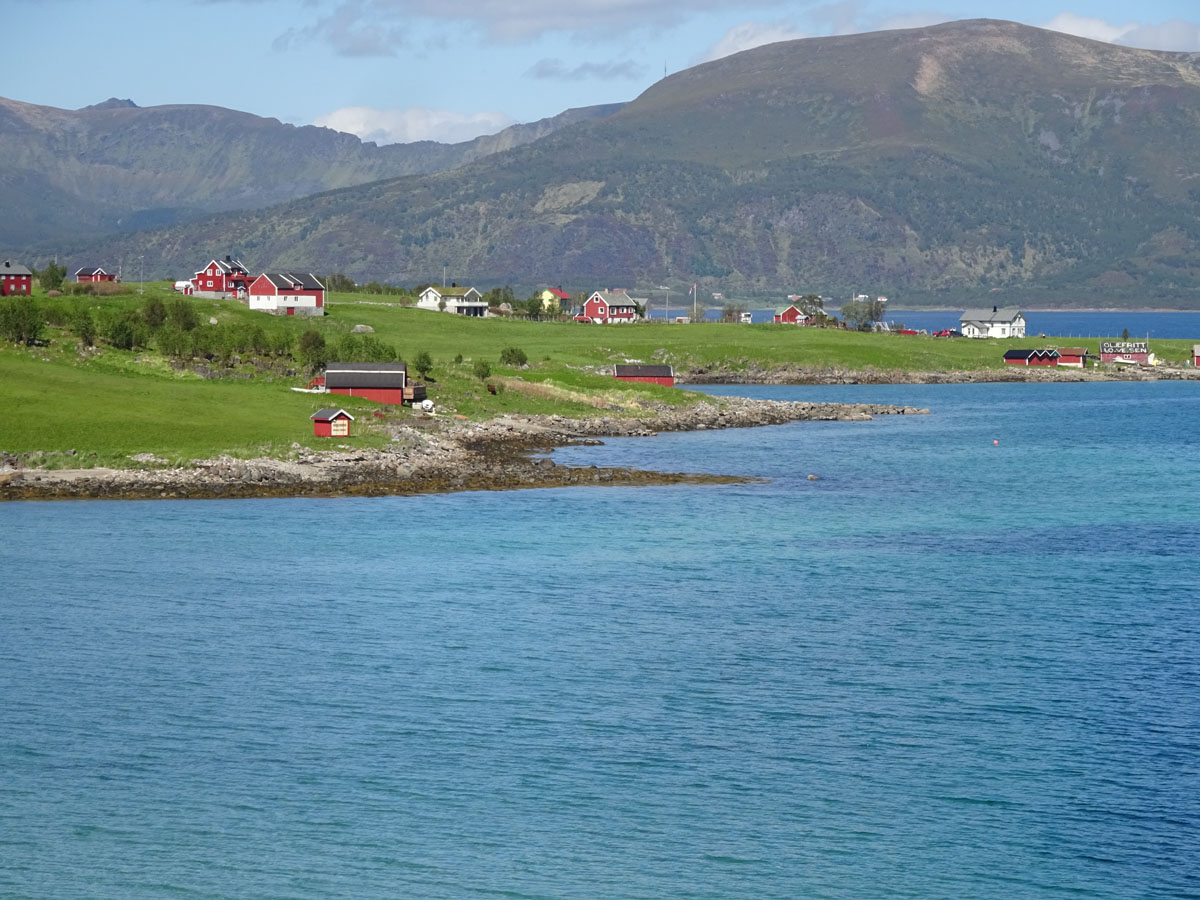 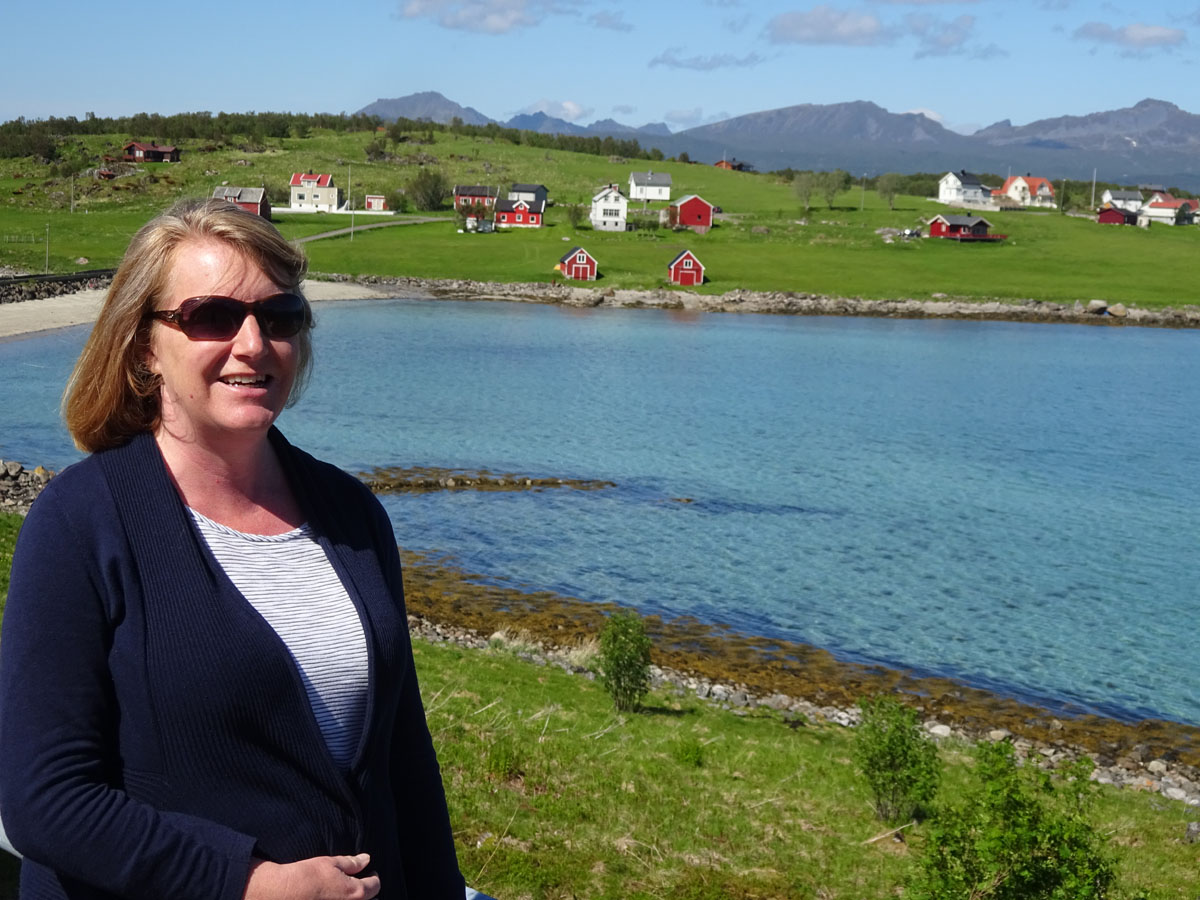 Our stop that evening was another picnic area, this time at Vestpollen where a viewing platform has been built overlooking a fjord. The weather had cheered up, and the view from the top was really pretty, especially as the sun was shining which makes such a difference. 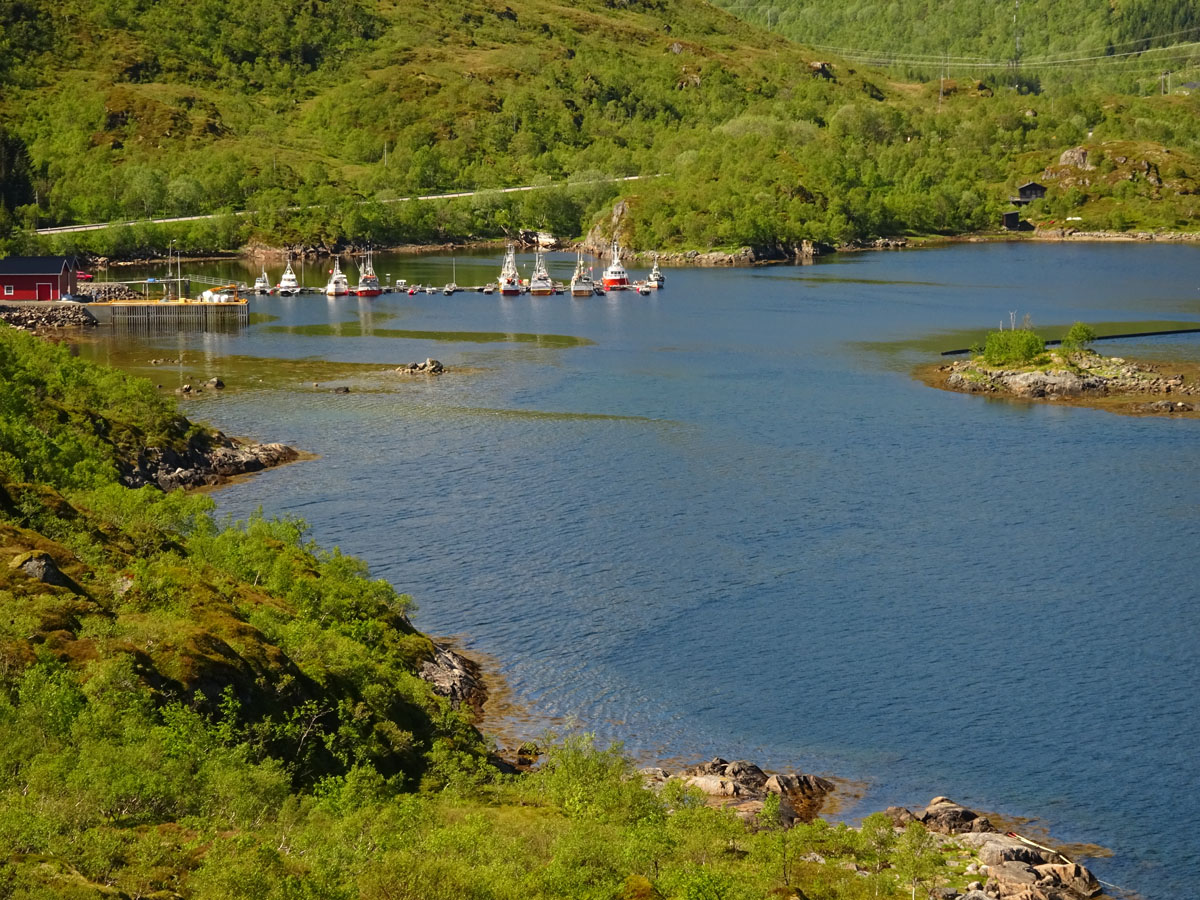 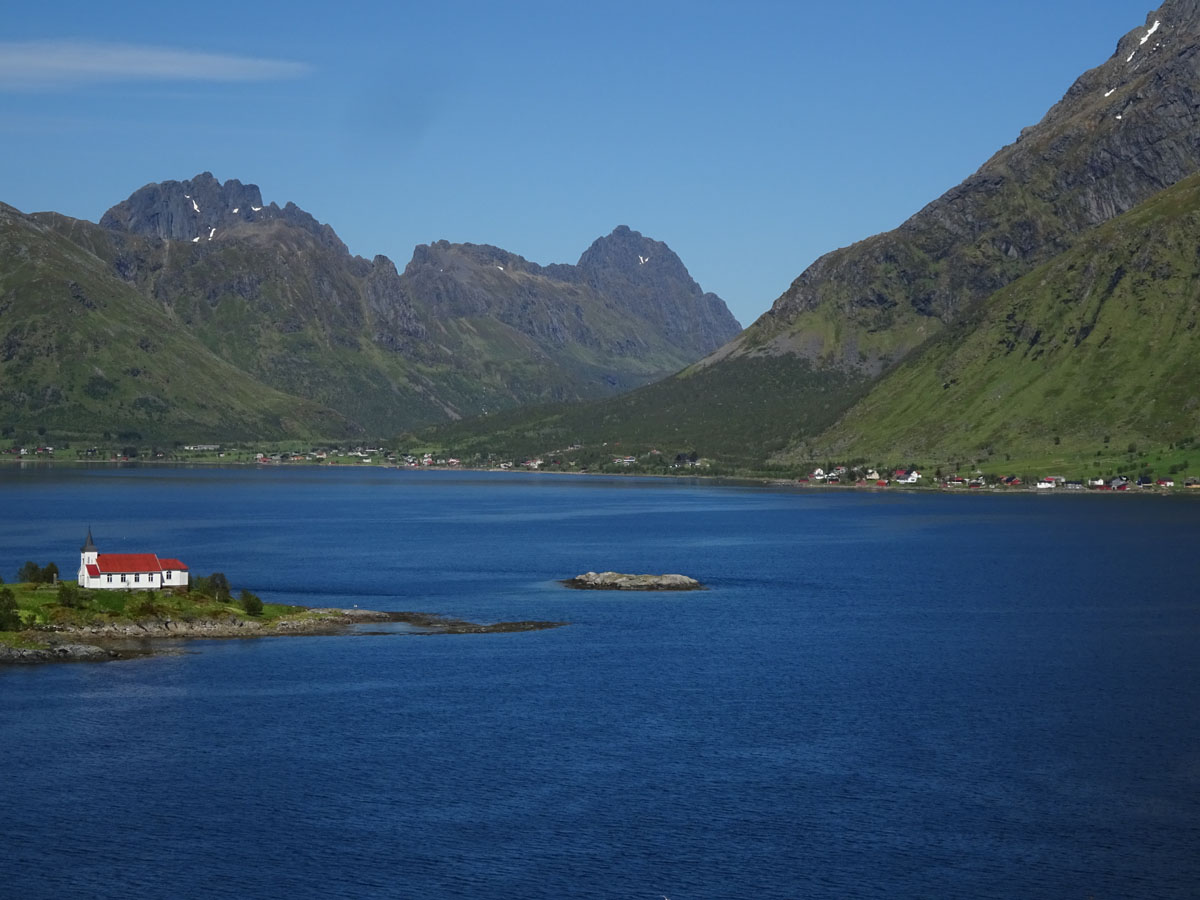 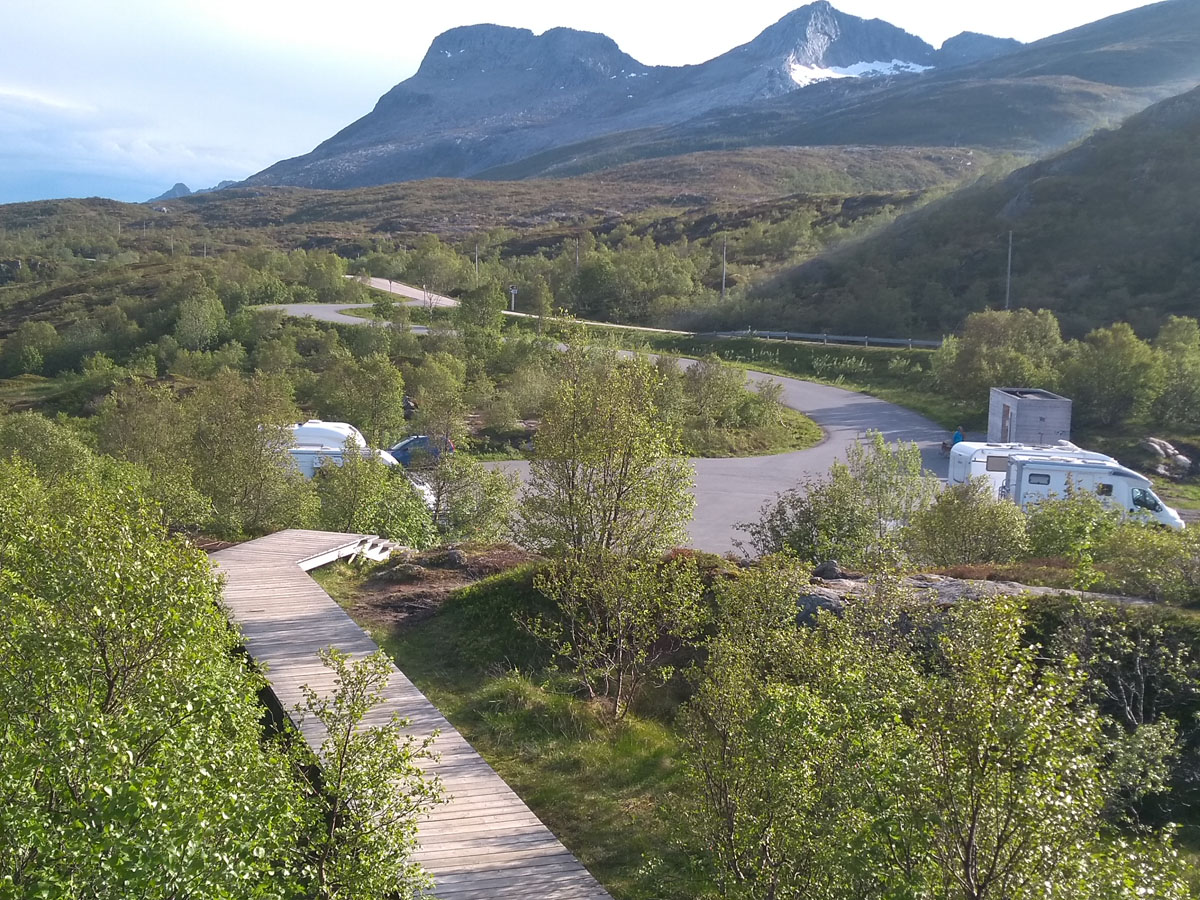 The next morning we continued along the E10 road to Svolvaer, the main administrative town of the Lofoten Islands, and parked the van in the Biltema car park. Resisting the urge to walk round my new favourite shop, we walked to the marina and took advantage of the free WiFi in the tourist office before going for a look round. It’s very much a service town, with lots of supermarkets and a couple of petrol stations. The only real sign of tourism were the kiosks for fishing excursions and boat trips. 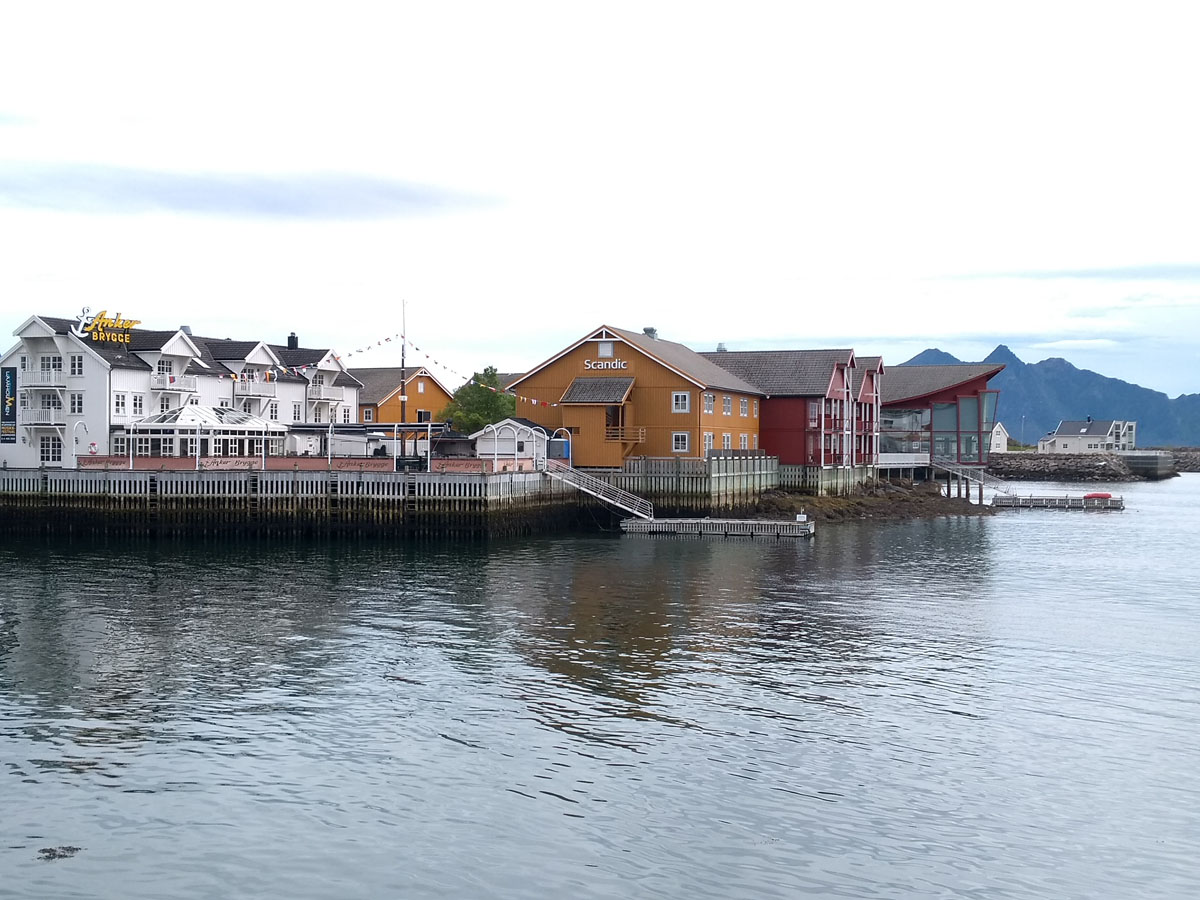 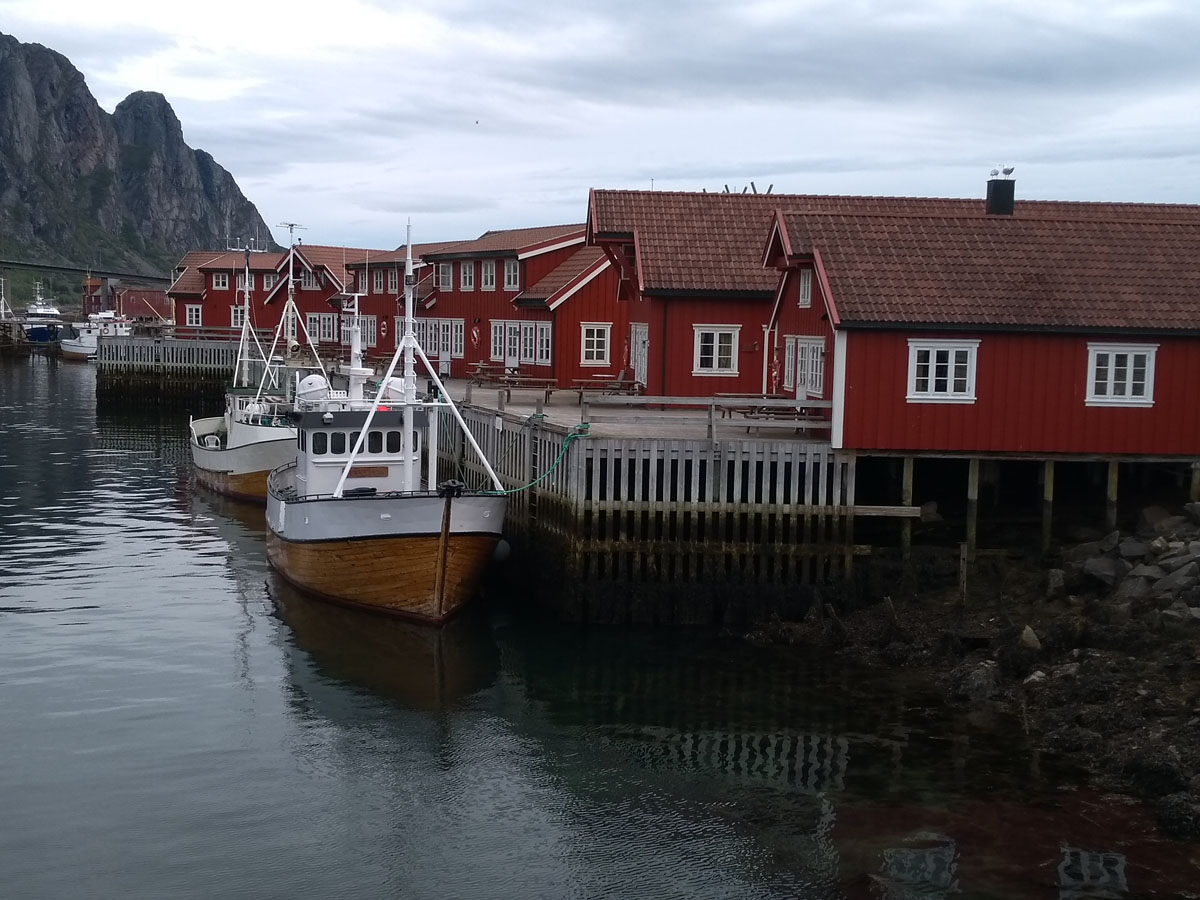 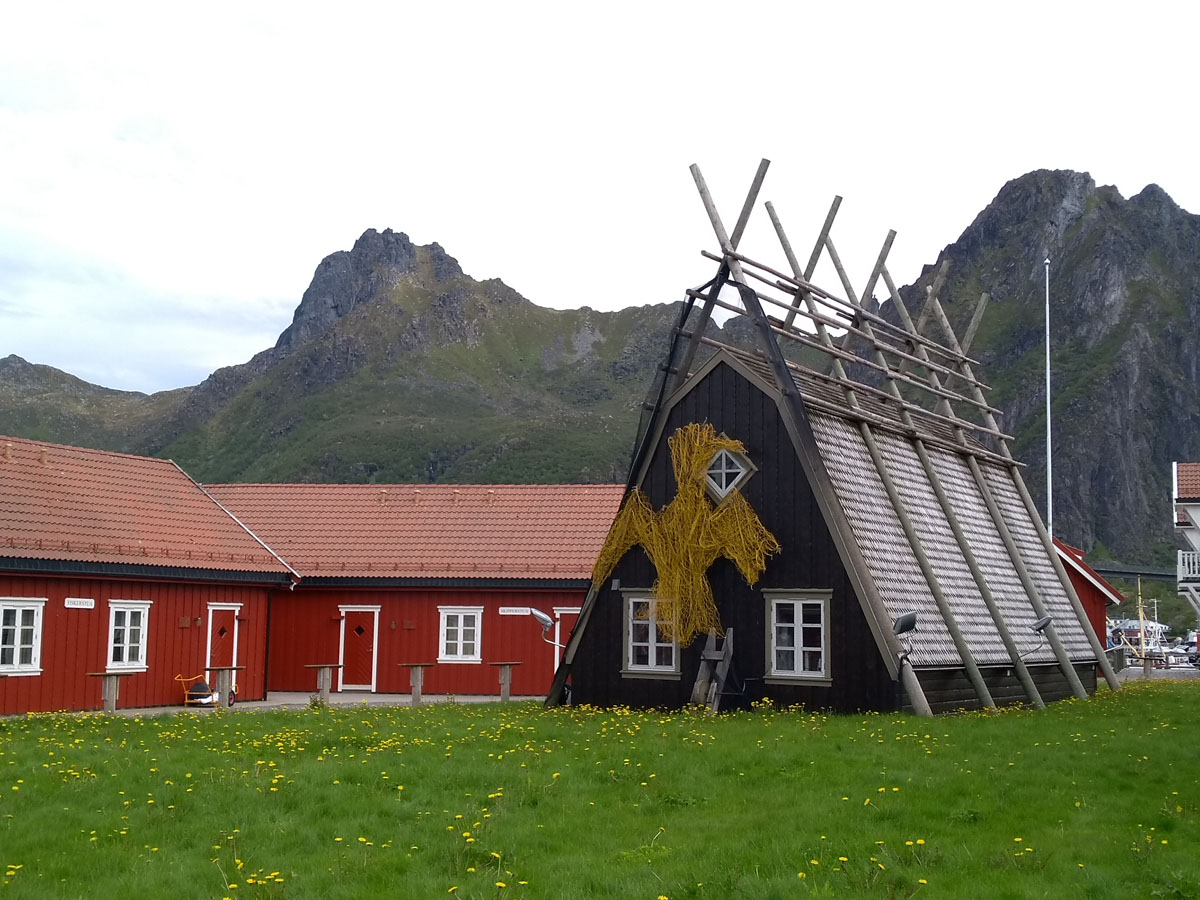 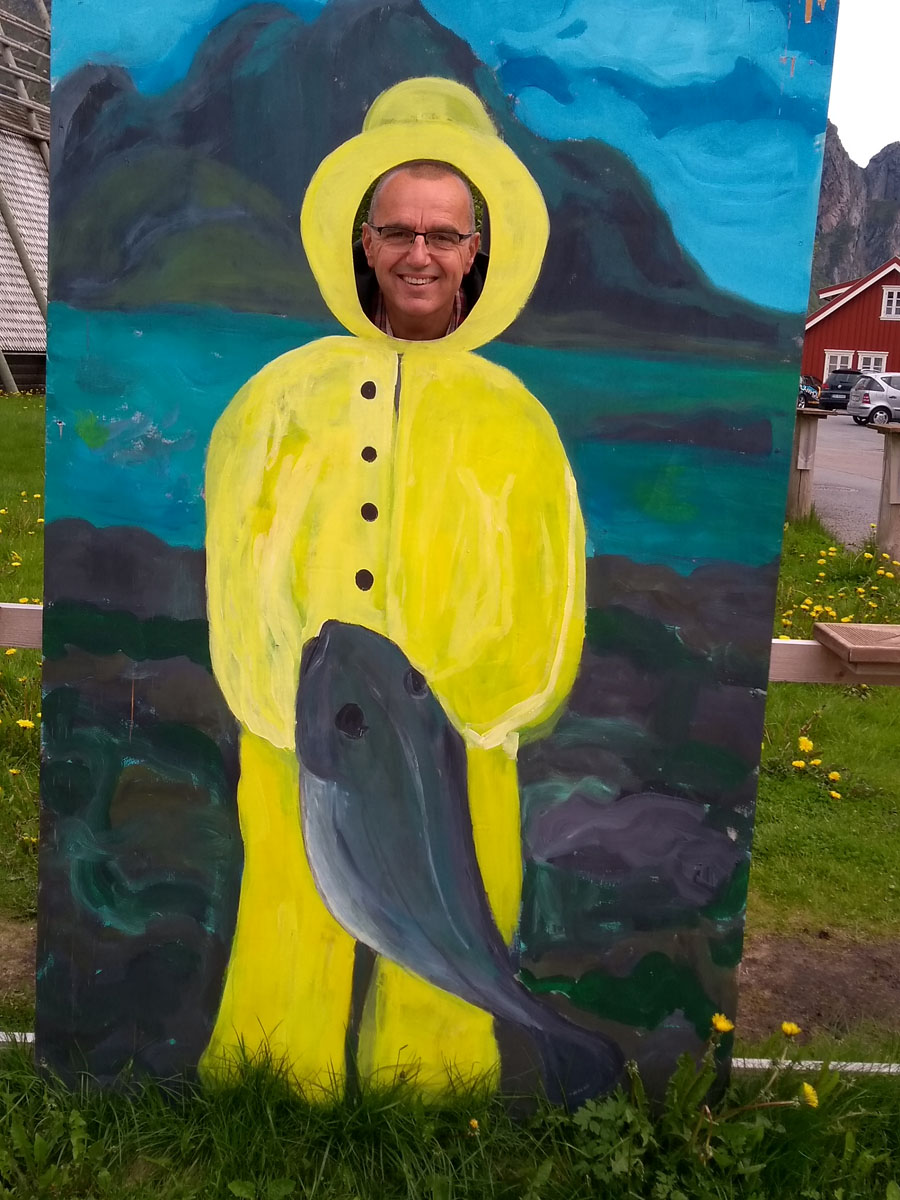 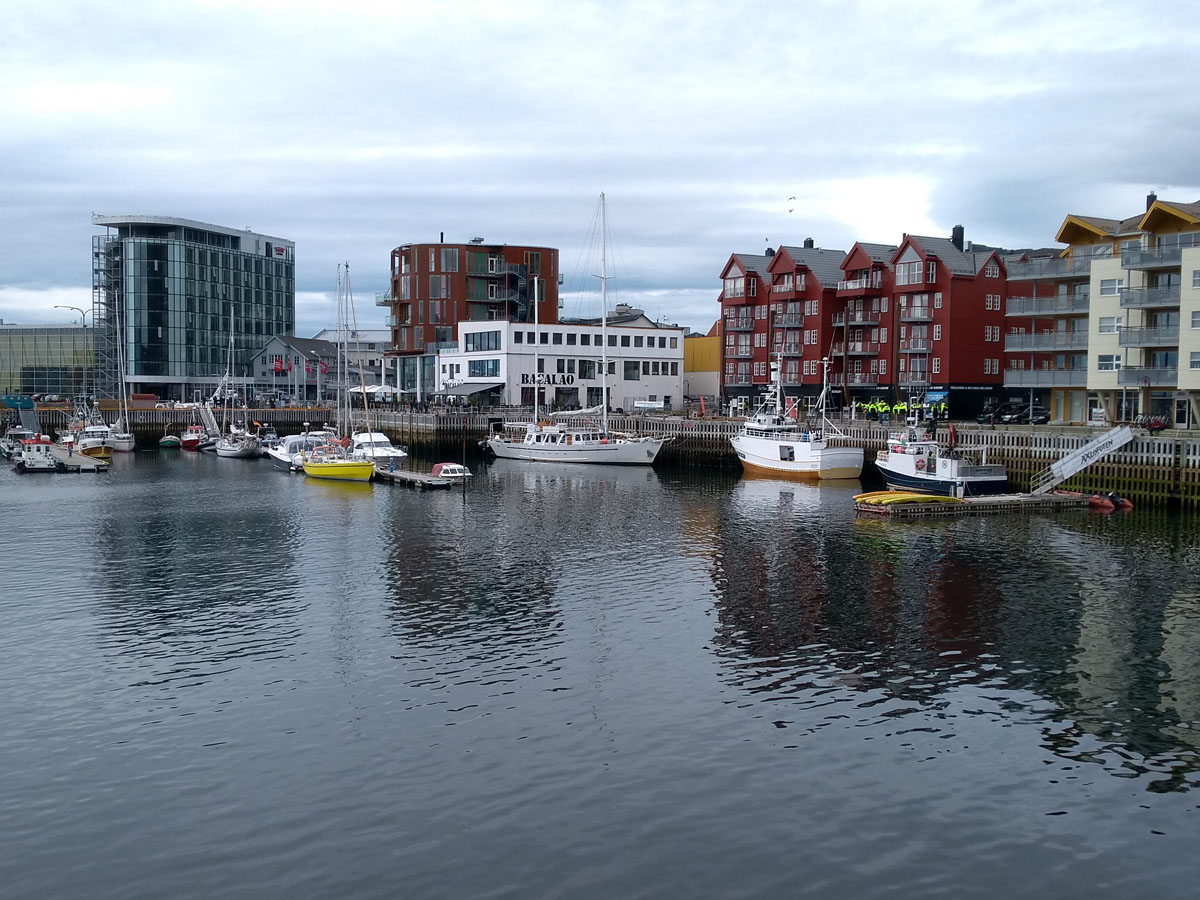 Back at the van we continued along the E10, taking the turn off for Henningsvaer. Built on an archipelago, the town bills itself as the Venice of the Lofotens, and it’s a popular place. It’s free to park there for up to six hours, but there’s a charge of 175 NOK for stopping overnight. We had intended to spend the night there, but the motorhome parking was on some scruffy waste land so we decided that we’d go for a walk round the town and then move on.

Whilst we’ve been driving around Norway, we’ve seen loads of empty wooden racks where cod are hung out to dry for three months. The dried fish are known locally as stockfish (the racks are called stocks), and the Lofoten Islands has the biggest concentration of stockfish producers in the world. Dried in the open air, with no salt or additives, the fish are a major export to southern Europe and also Nigeria. We thought we’d arrived in Norway too late to see any fish strung up on the racks, but as we walked across the Henningsvaer marina we could see loads of stockfish on the racks at the end of the island. Fortunately the area wasn’t fenced off so we were able to walk up close and have a good look. The air was a bit niffy, but nowhere near as bad as expected, and it’s amazing to see that the local seagull population doesn’t go on a feeding frenzy. 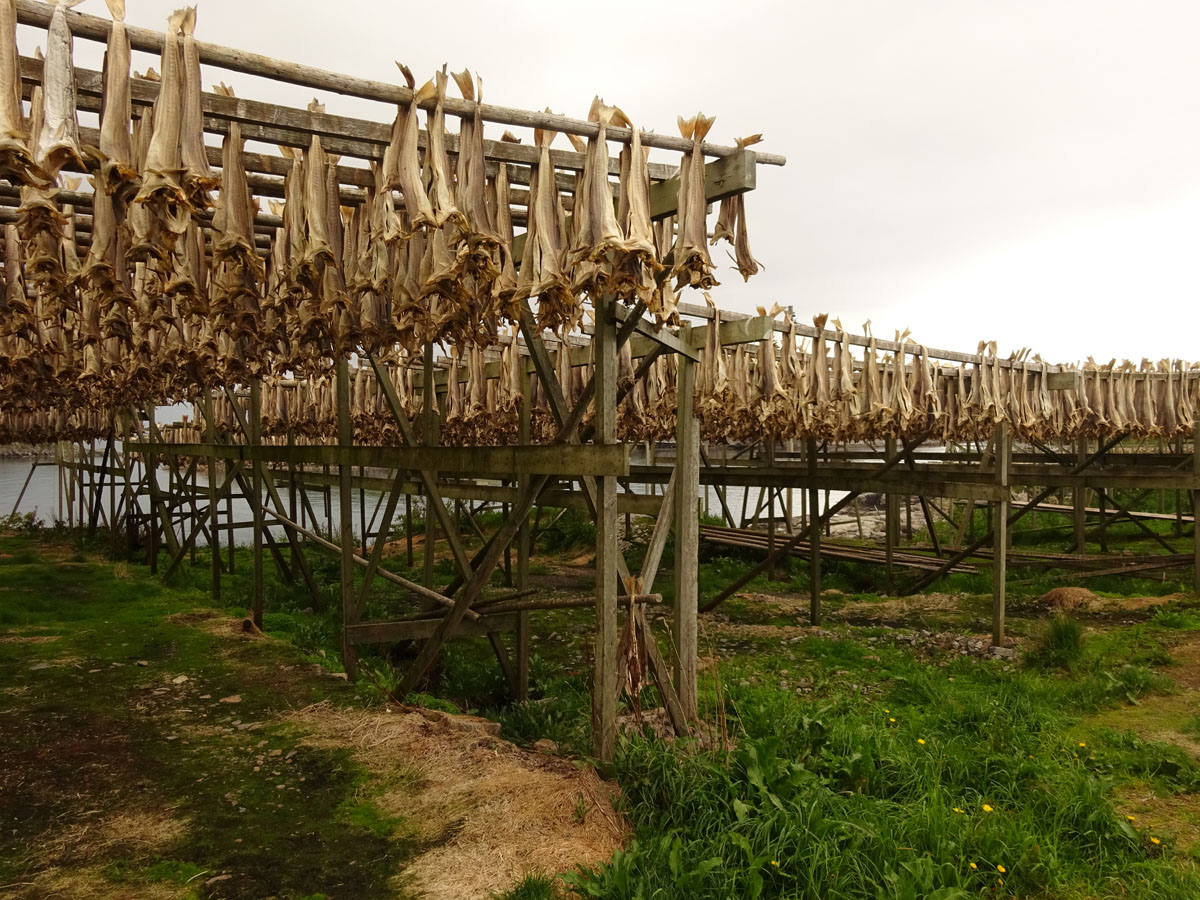 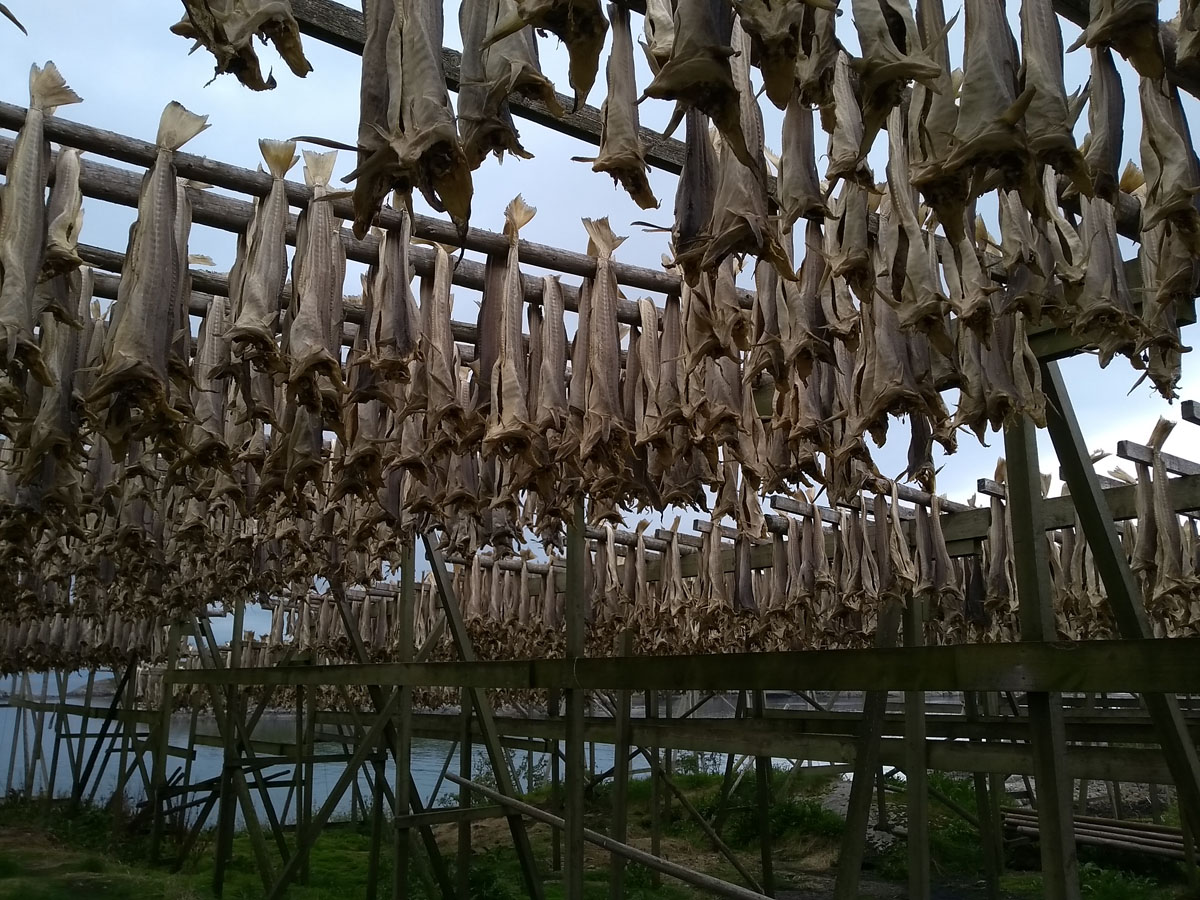 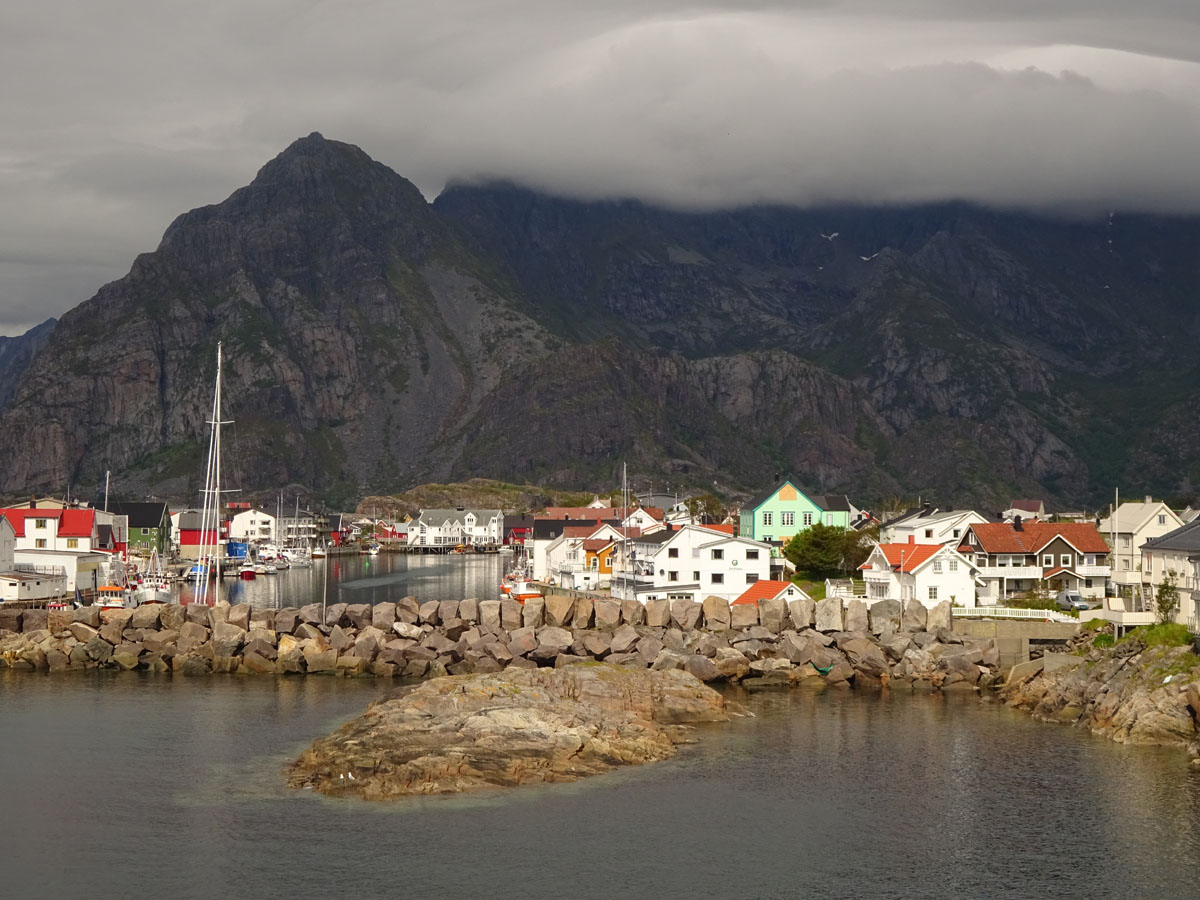 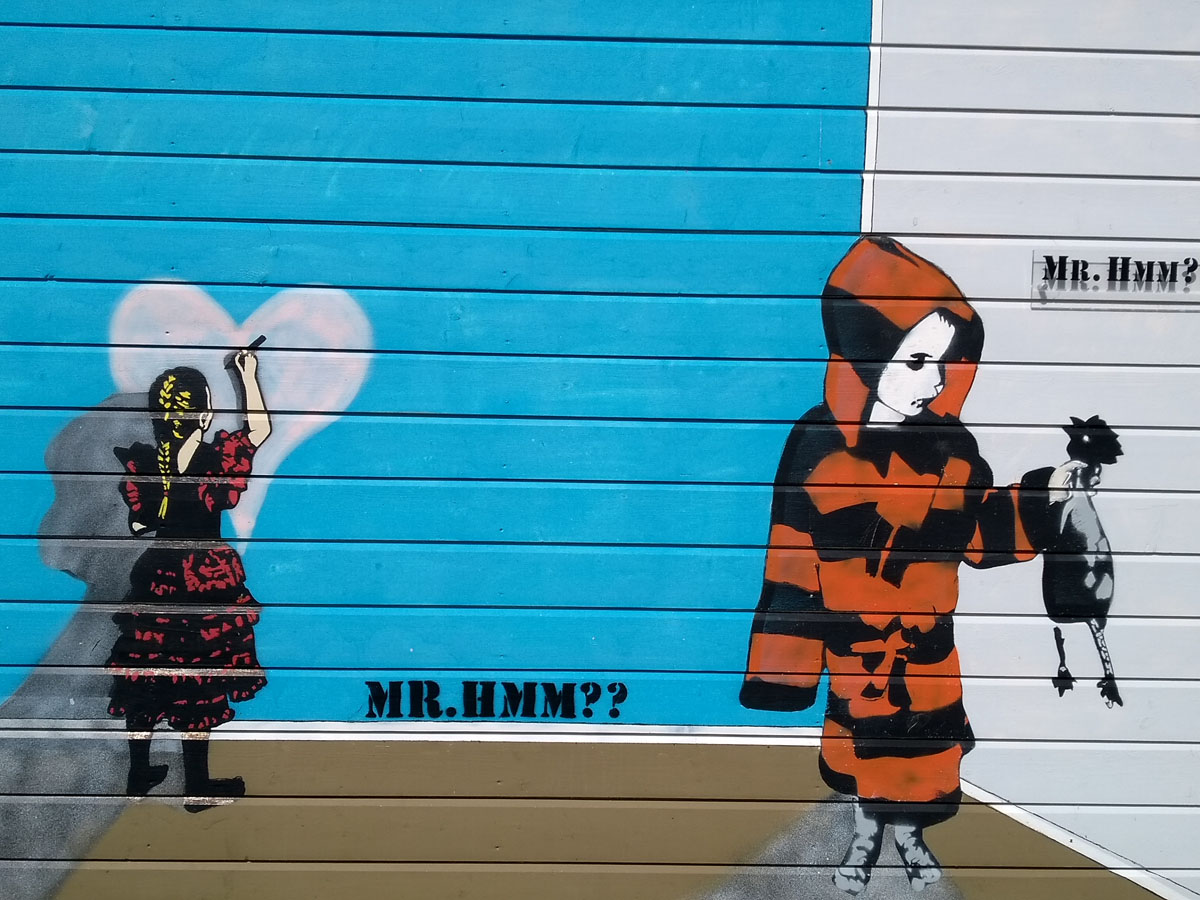 There wasn’t much else to see or do in Henningsvaer other than eat or drink, so we followed our way back to the E10 and drove further along to Eggum, where there’s a small camperstop on a nature reserve. Close by were the remains of a WWII fortification built by the Nazis in 1943/4, which was used as a radar station to monitor shipping convoys. 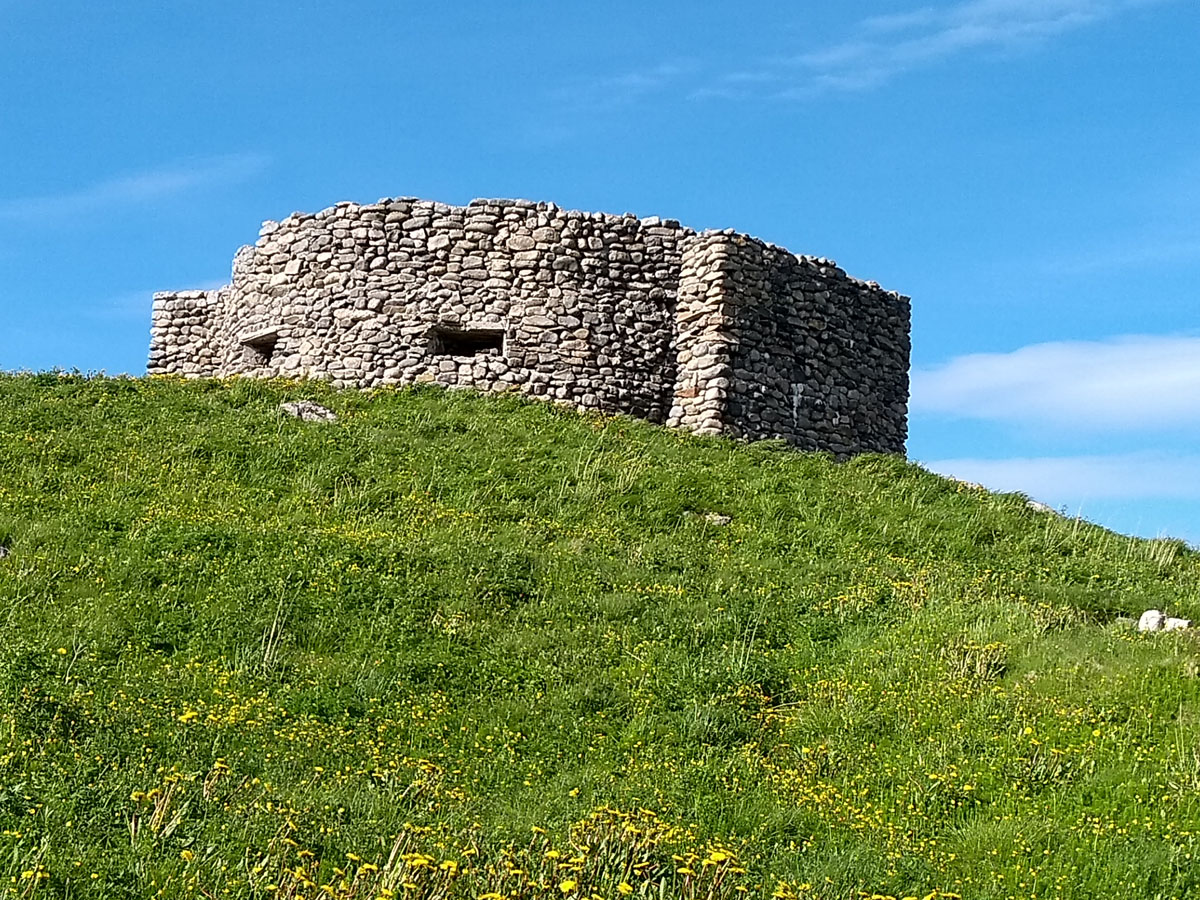 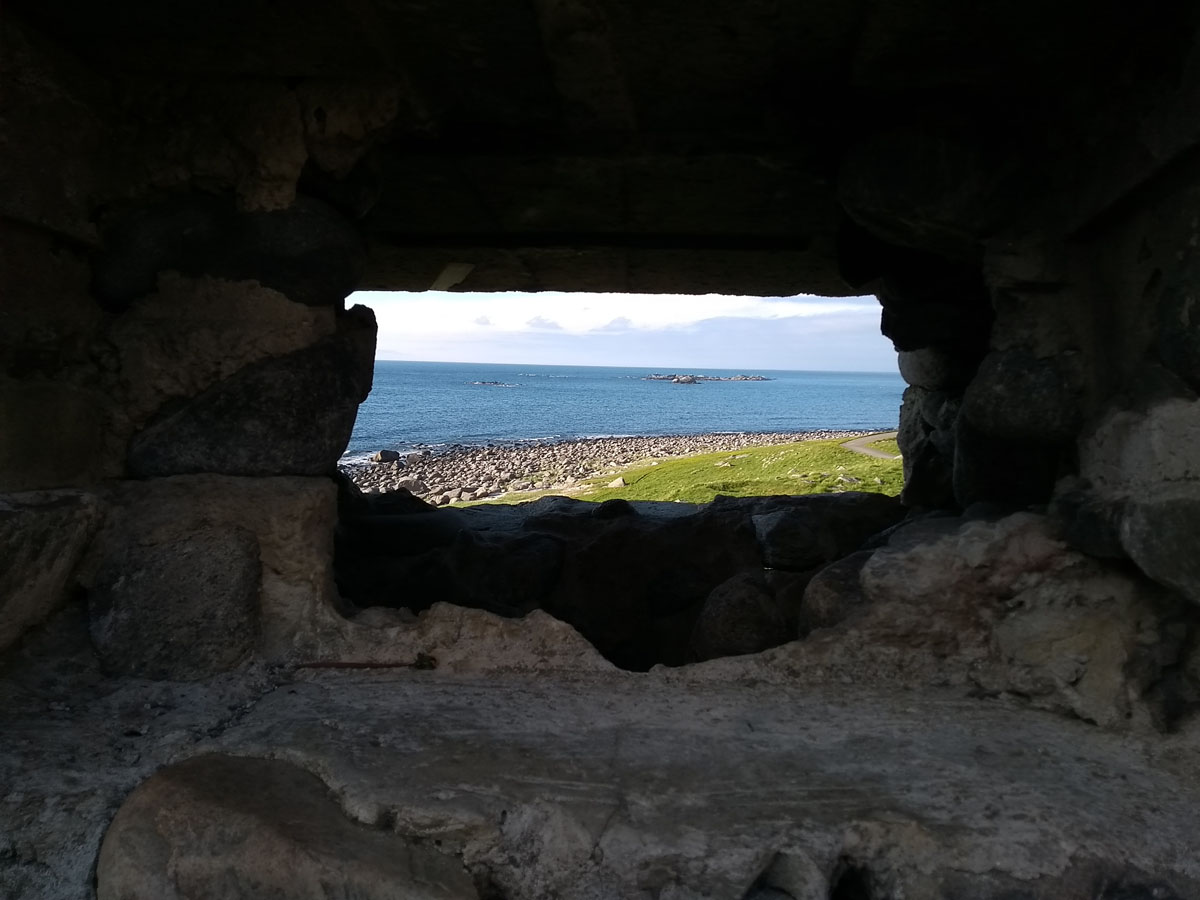 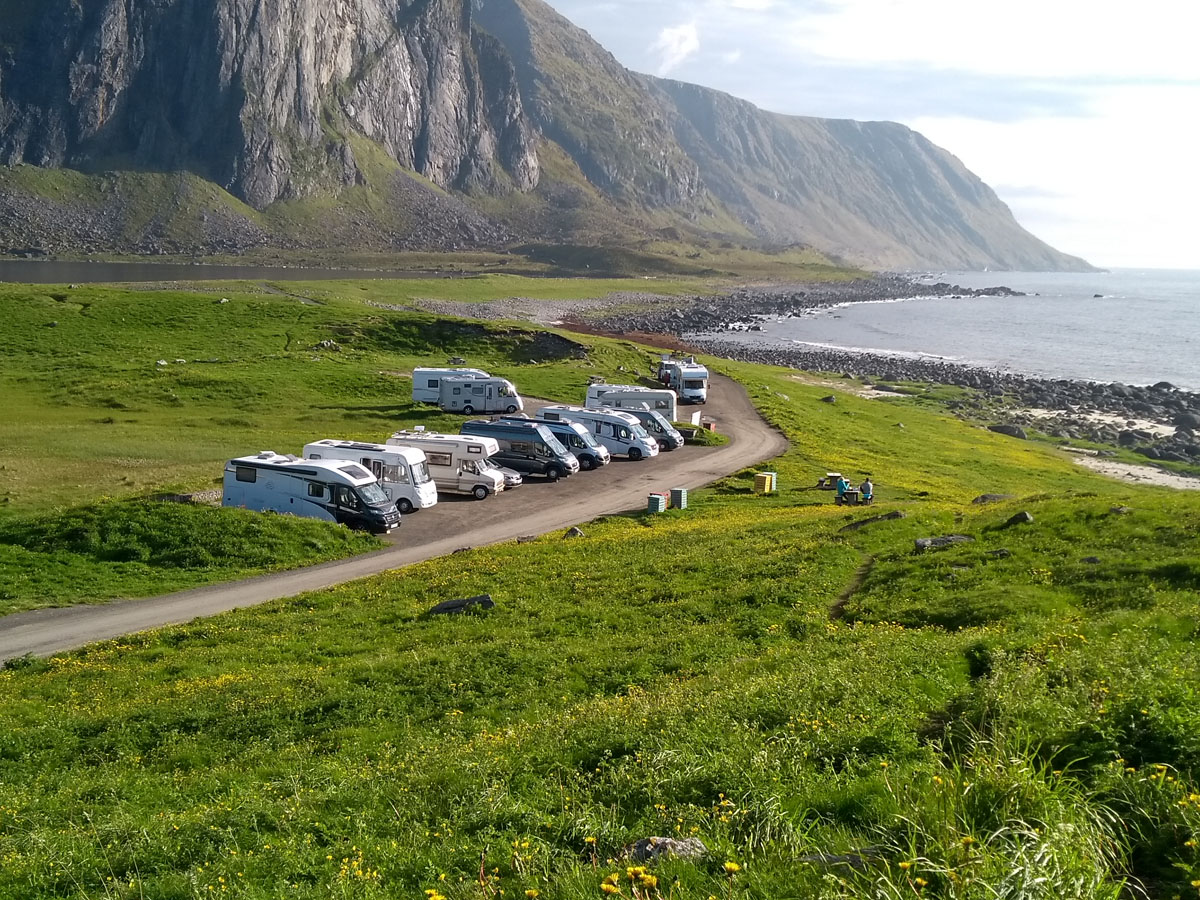 Whilst the weather had been overcast for much of the day, the skies did brighten up, and with a clear view over the sea to the horizon we thought that we might at last be in with a chance seeing the midnight sun. A few of our neighbours were obviously thinking the same thing, walking up and down with their cameras out, and one had even set up his tripod, but alas it wasn’t to be. By 11pm the skies had clouded over and so we’ll have to wait for another time.

The reason for staying at Eggum is that it was only a short distance from the Viking museum at Borg, so yesterday morning we were there just after opening time. After watching an introductory film we walked around the museum containing artefacts found on site. It’s on the site of the largest Viking house ever found, and they have built a reconstruction of the 83 metre structure alongside the original house site. The reconstructed house was huge, and inside there were people dressed up as vikings entertaining the visitors. Reconstructions of a smithy and boat house have also been built, and we even went rowing in a viking ship out onto the fjord. We had a really enjoyable day there. 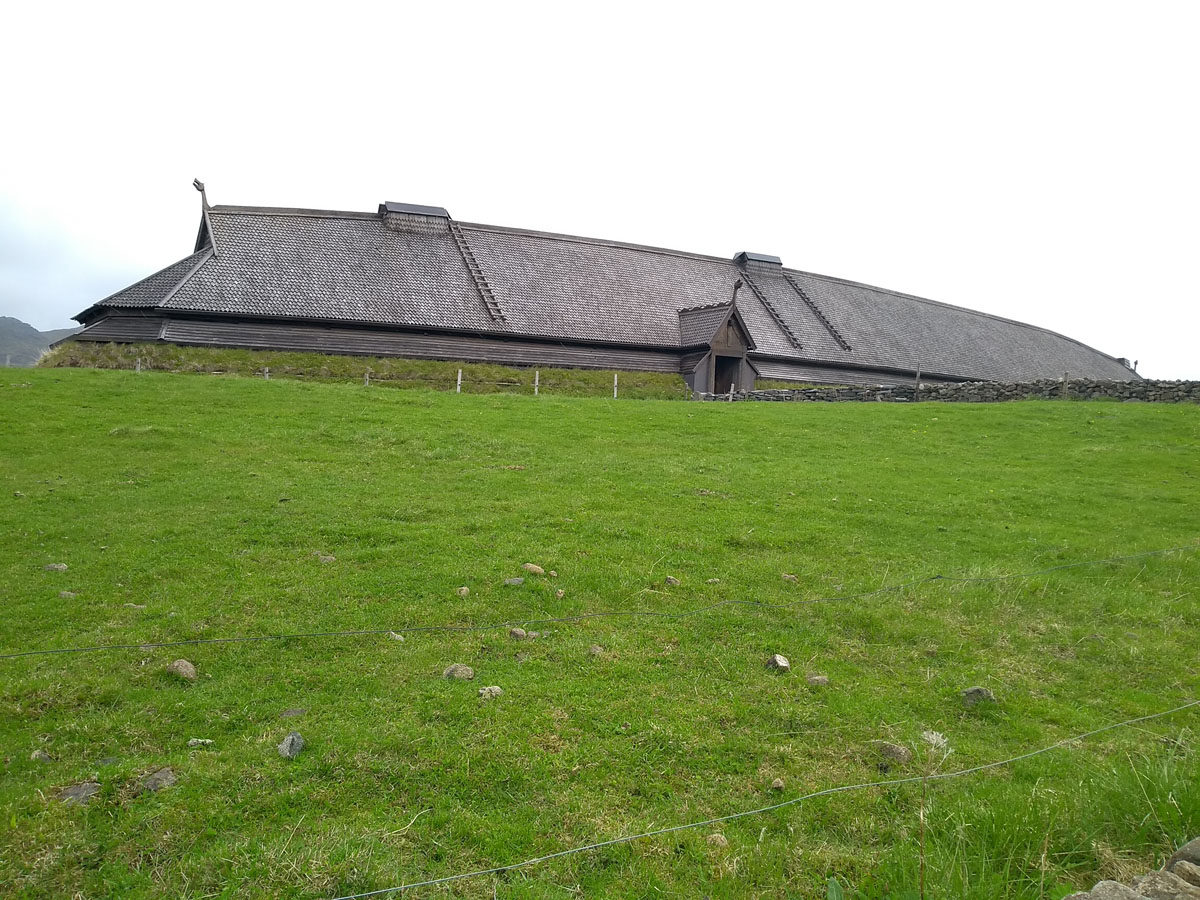 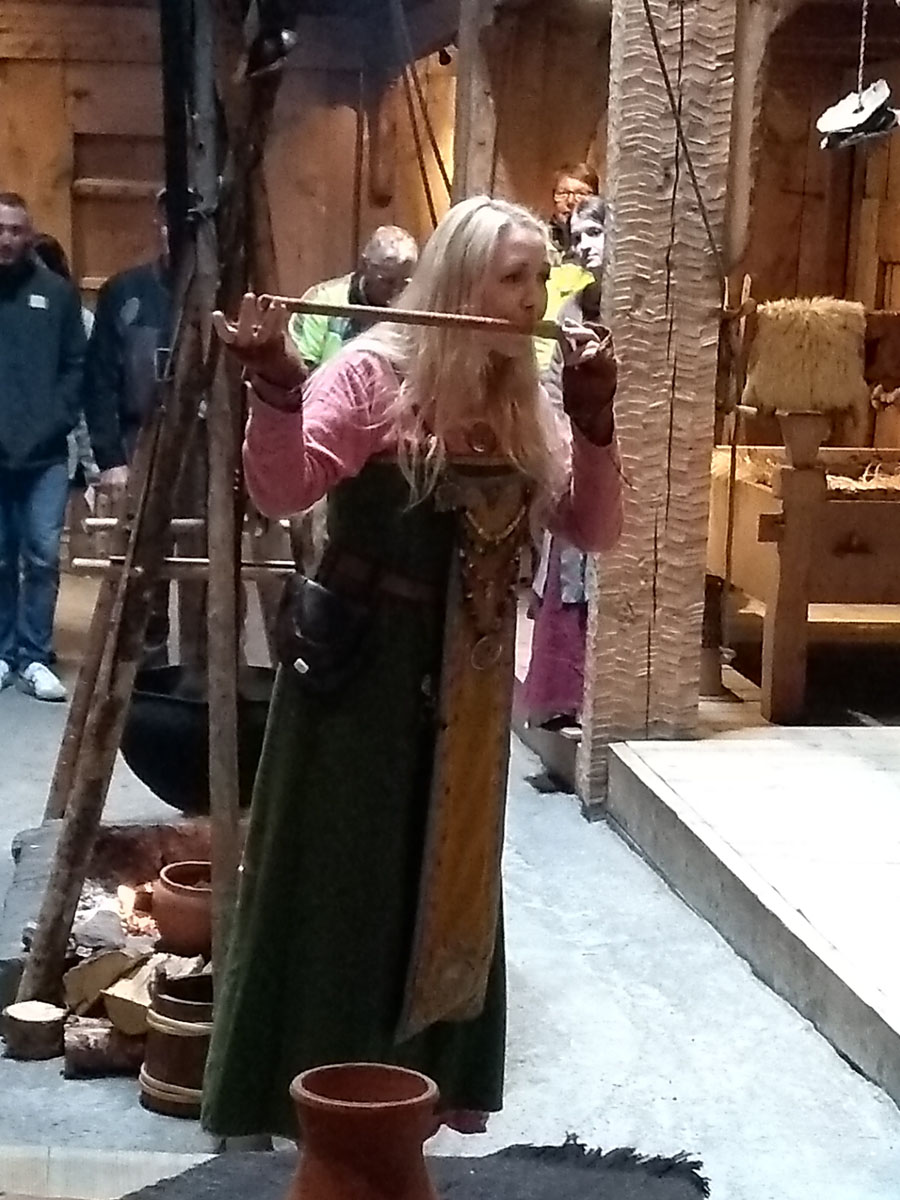 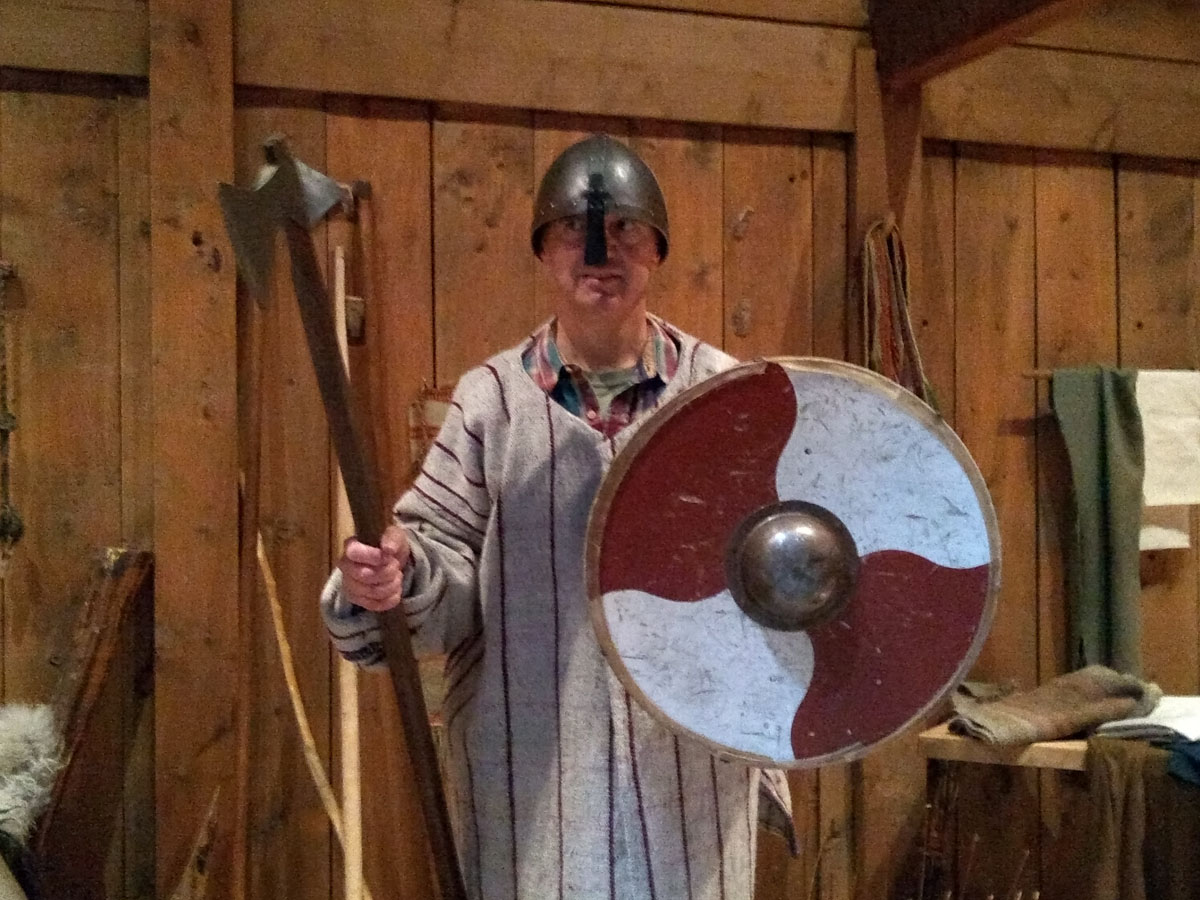 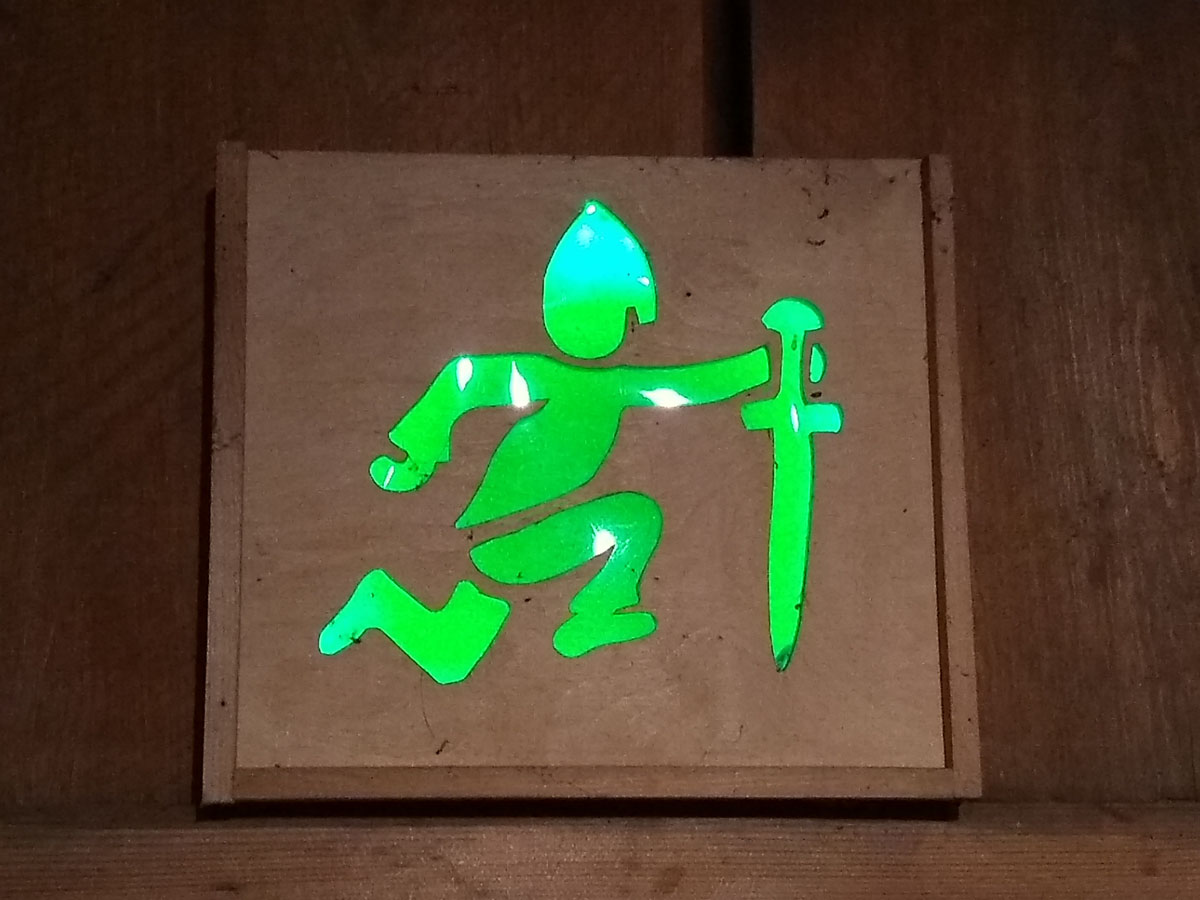 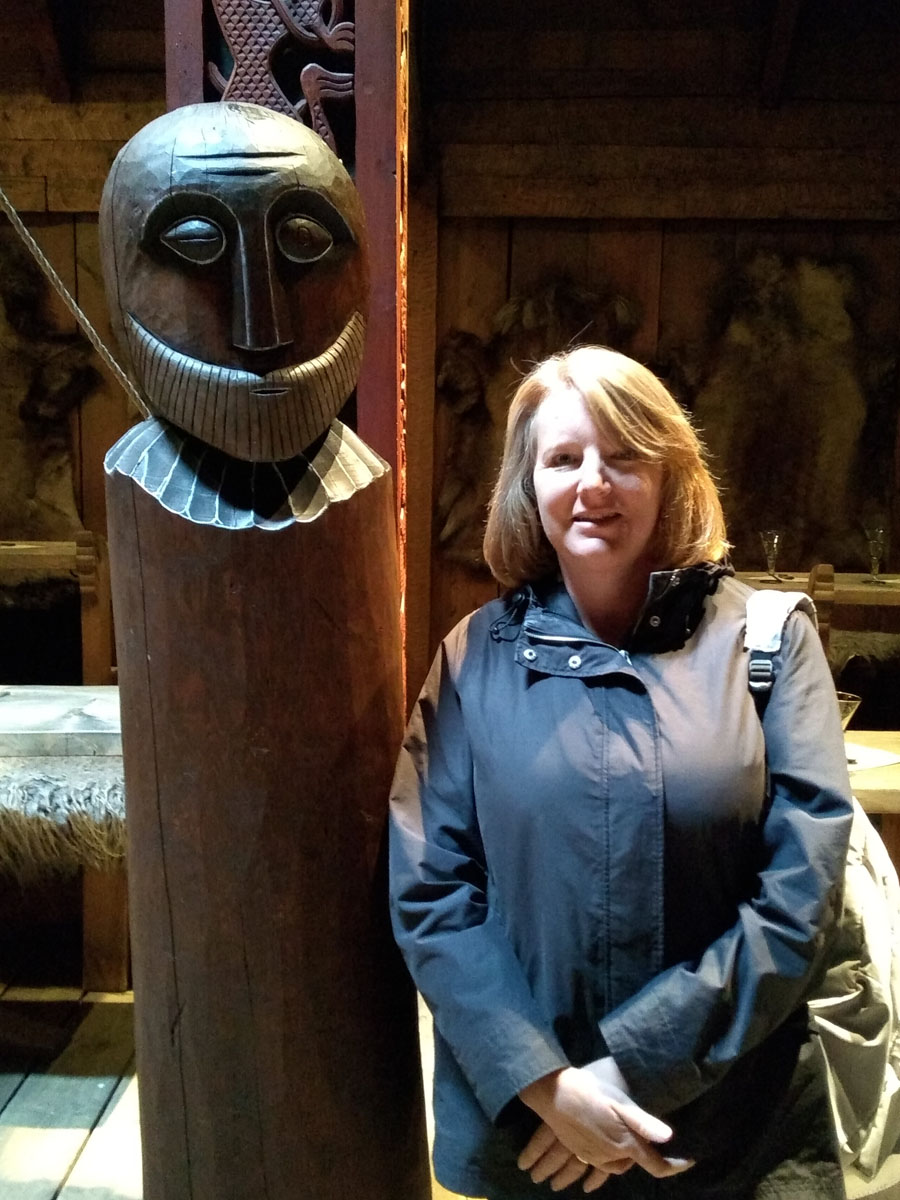 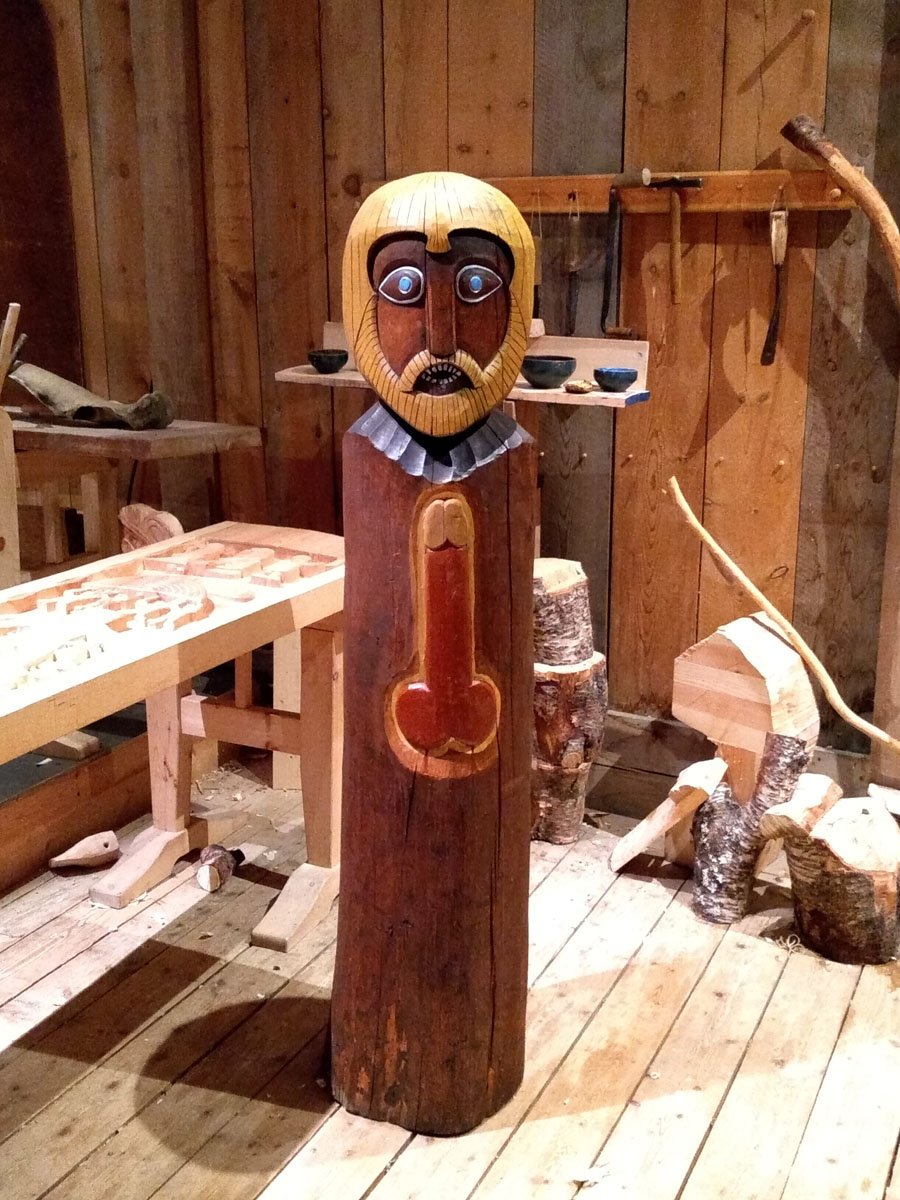 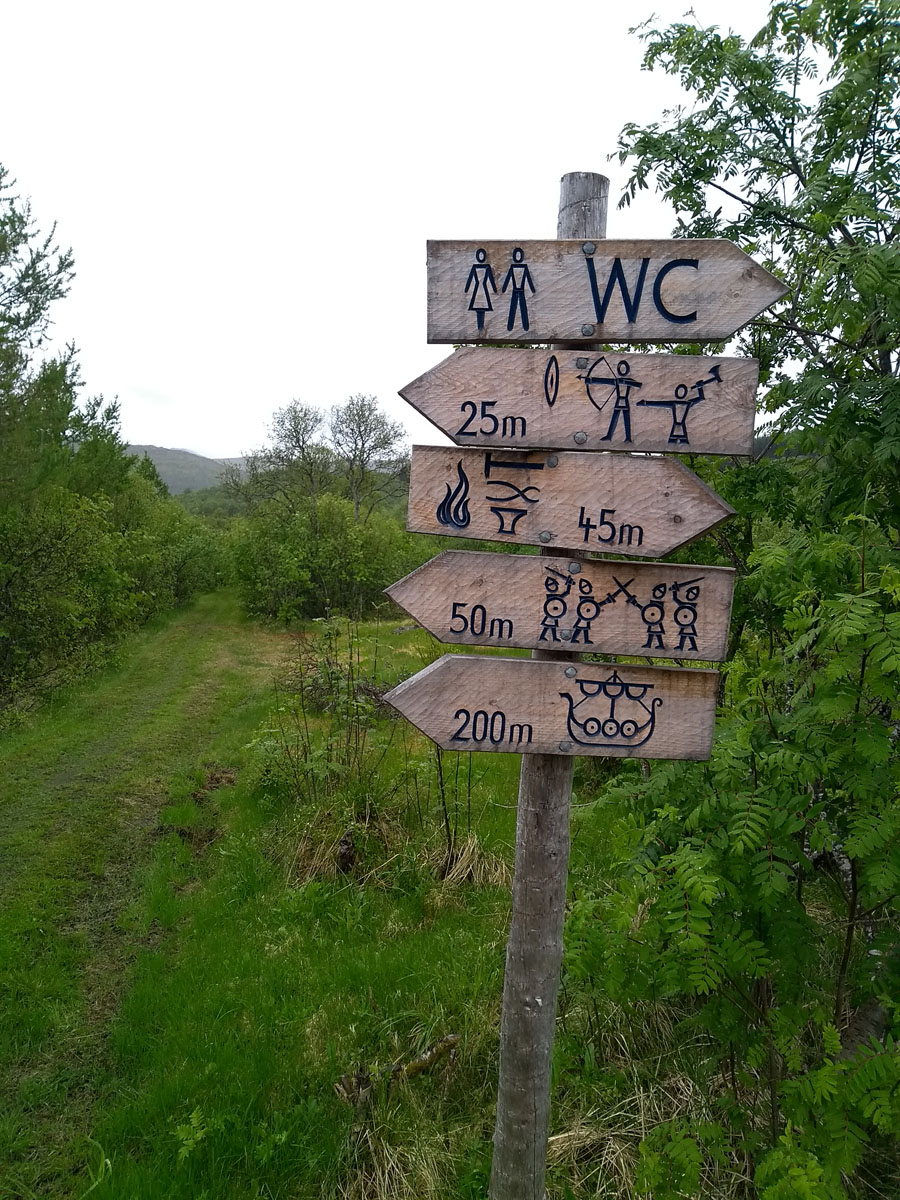 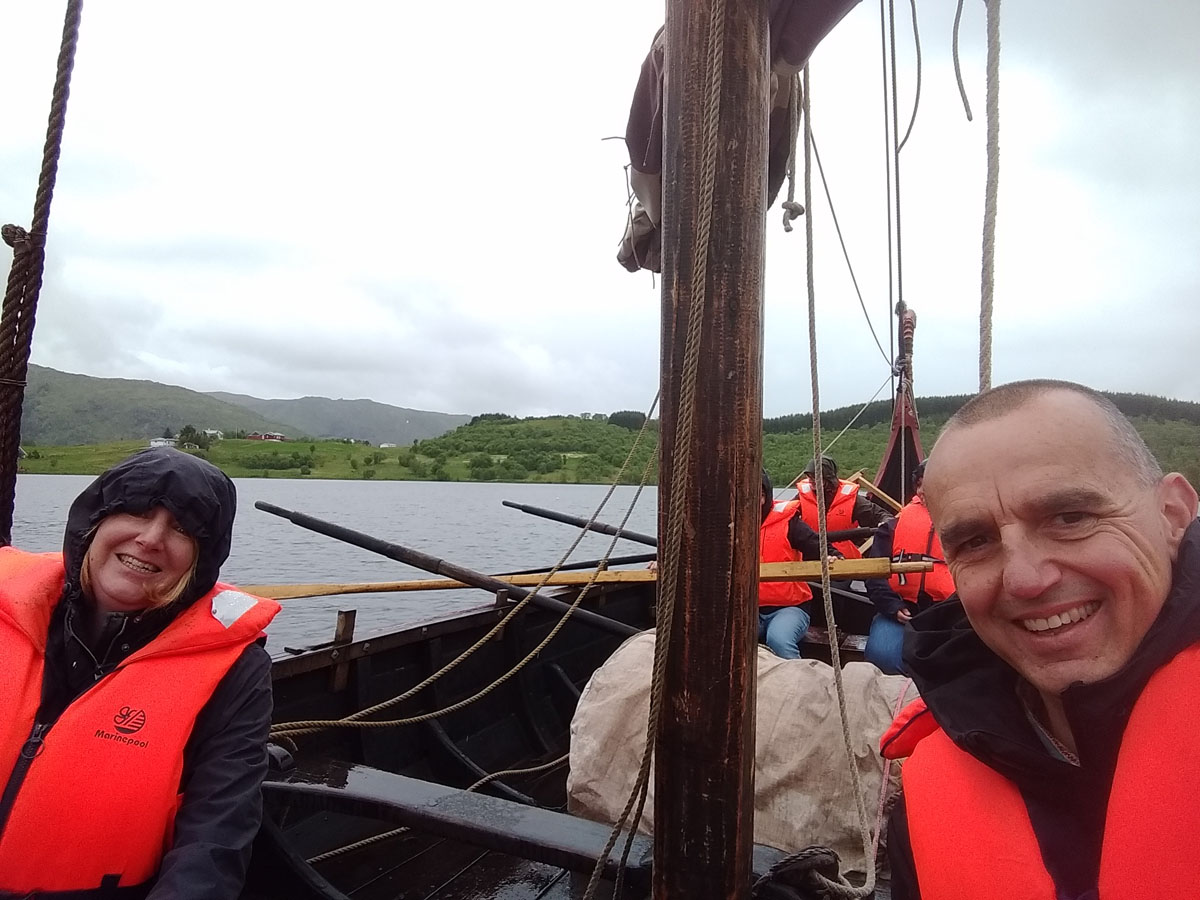 Last night we stopped at a picnic site overlooking the sea at Hamnøy. Again the weather wasn’t good, so there was no chance of seeing the midnight sun. We did though see loads of classic cars coming and going, which were doing the Baltic Sea Circle rally: starting and finishing in Hamburg, it’s a 7,500 km journey through ten countries in 16 days, driving a 20+ year old vehicle with no GPS. That sounds like a great adventure. 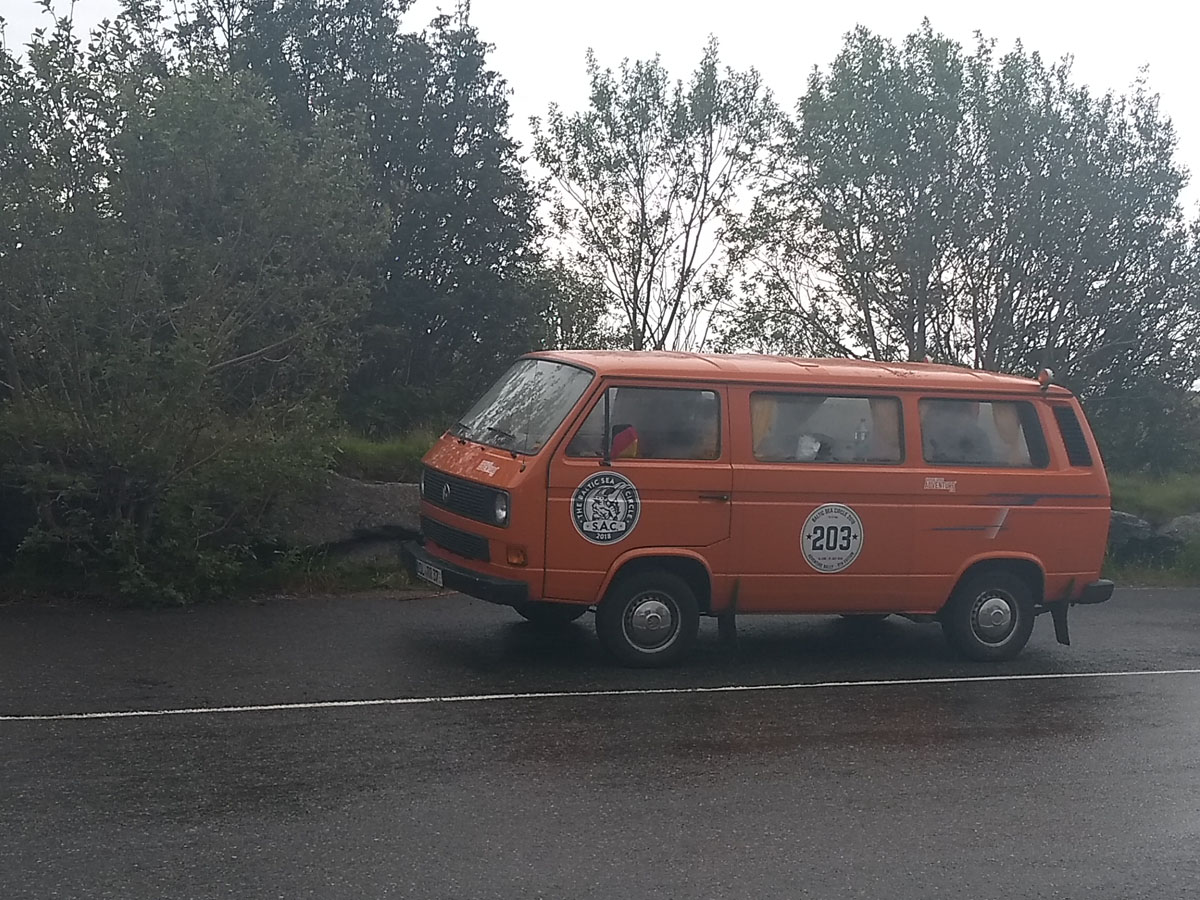 This morning we drove along to the end of the E10 road and the end of the Lofoten Islands, to a village with what must be the world’s shortest name: Å. It’s the 29th letter of the Norwegian alphabet, which was introduced in 1917 to replace aa. It’s a pretty little fishing village, standing mainly on stilts and built around a small harbour. It’s geared towards tourists, with its cafés, museums and a couple of tat shops, but there wasn’t much to keep us there and so we’re now sat in the port at Moskenes waiting for the ferry which will take us to the mainland.