We had a lovely birthday meal out in Oberkirch, going to one of the restaurants that the lady in the tourist office had recommended. Both of us went for a pork dish with sauté potatoes topped with a fried egg, washed down with a bottle of the local wine, and the desserts were good too. Oberkirch is a lovely town which will be better still once the pedestrianisation of the main high street has been completed. 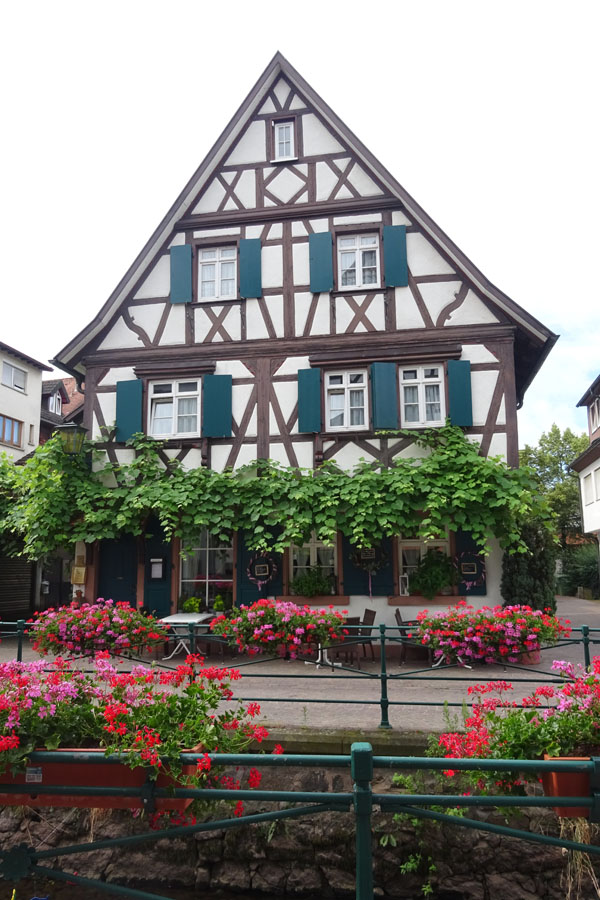 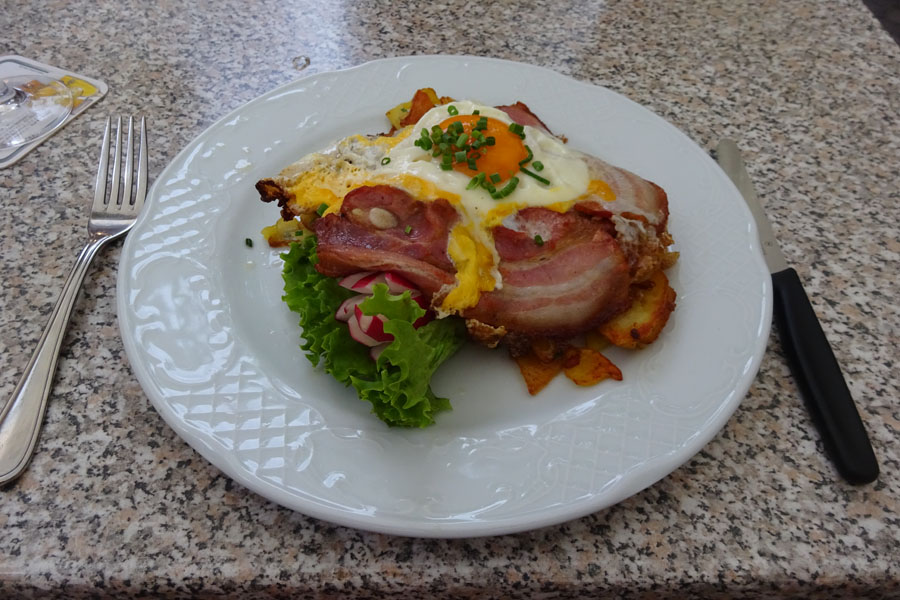 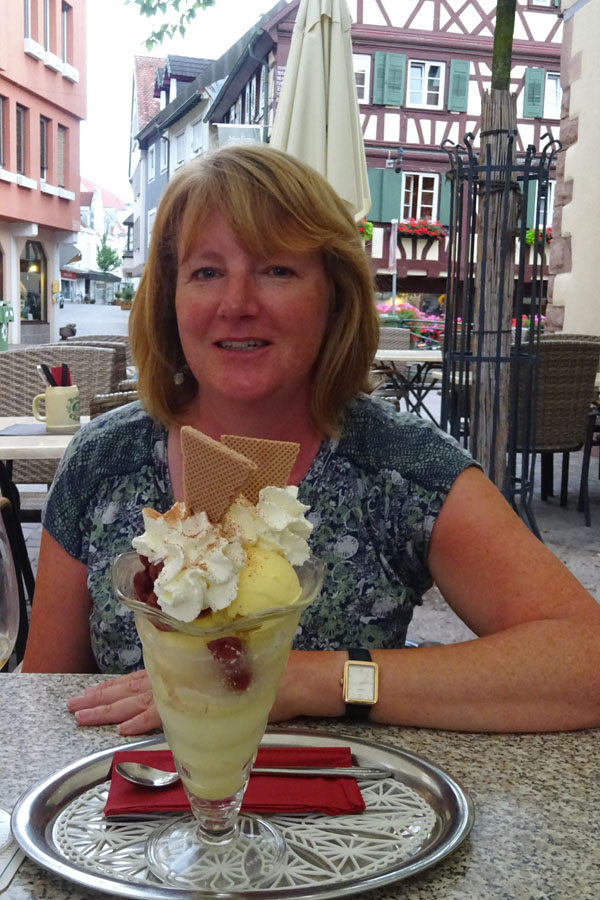 Our plan was to move onto Haslach Im Kinzigtal, with its pretty old town. According to our new stellplatz book, there were three different places in town to park the van for the night. We visited all three and none had dedicated moho spaces, and there were no other vans about, so we came up with a plan B which was to visit Triberg where the Black Forest gateaux was invented, and also home of the cuckoo clock. Given that it was tipping down with rain, we didn’t even get out of the van at Haslach Im Kinzigtal.

As expected, Triberg was very touristy. We would have liked to have seen the waterfalls there but the admission fee put us off, so we gave it a miss as we’ll be seeing plenty of much bigger and better waterfalls for free when we get to Norway next year. Instead we headed for the biggest cuckoo clock shop and went for a wander inside. There were clocks of all shapes and sizes, from cheap digital clocks to hand carved clockwork ones costing thousands. 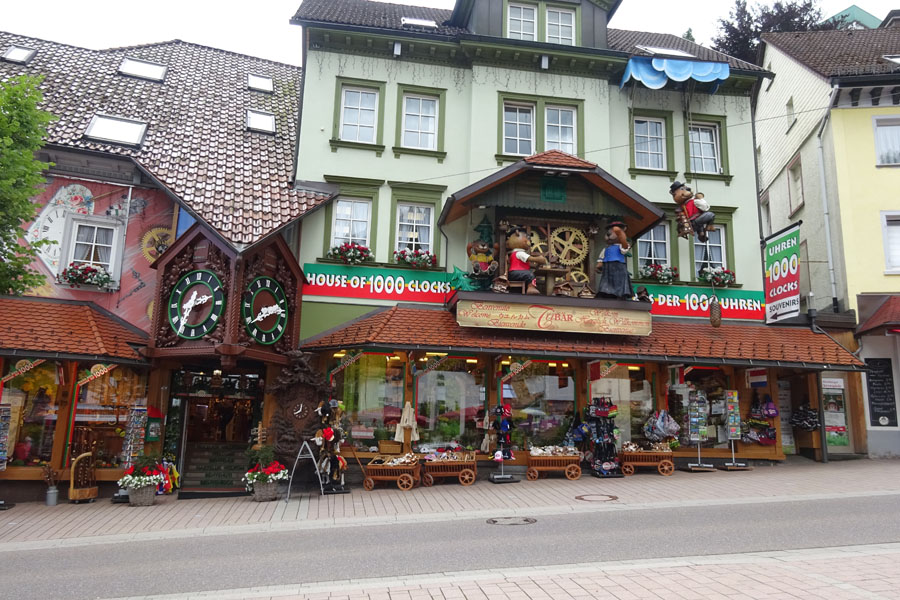 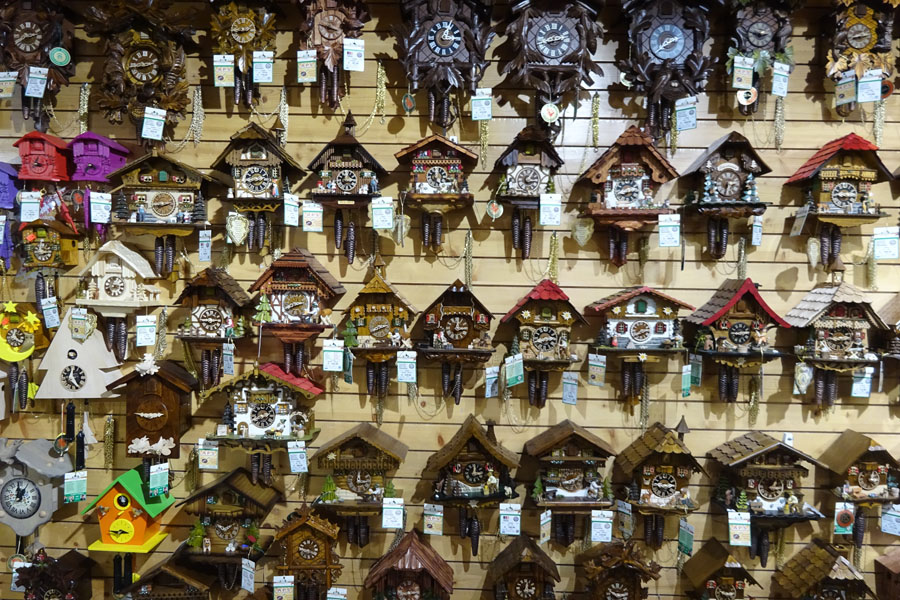 Our stellplatz for the night was high up in the hills behind a small rural village. We were the only ones there and it was very quiet. As electricity was available, we were able to tune the TV into Freeview and watch some telly. We think we were supposed to have paid €10, but there were no notices up and nobody came to collect any money, so we stayed the night for free.

Yesterday we chose the stellplatz at Geisingen as it was well laid out and had good facilities, rather like a campsite without the shower block. Walking into Geisingen, we found it to be a small village with a pretty high street and not much else, apart from a large sports centre with an inline skating track which douobles up as a cycling velodrome. We’re finding that the sports facilities across Germany are great.

When we first arrived at the stellplatz,each pitch had a notice saying that it was reserved for today for a bimobil offroading event, which is a bit naughty as stellplatz (and aires) work on a first come first served basis, and you cannot reserve spaces. Fortunately we weren’t impacted but I bet a lot of people turned up this afternoon and would be unhappy to be turned away. Quite a few bimobil vans (offroad 4×4 motorhomes) did stay overnight last night as well, almost outnumbering the regular vans. 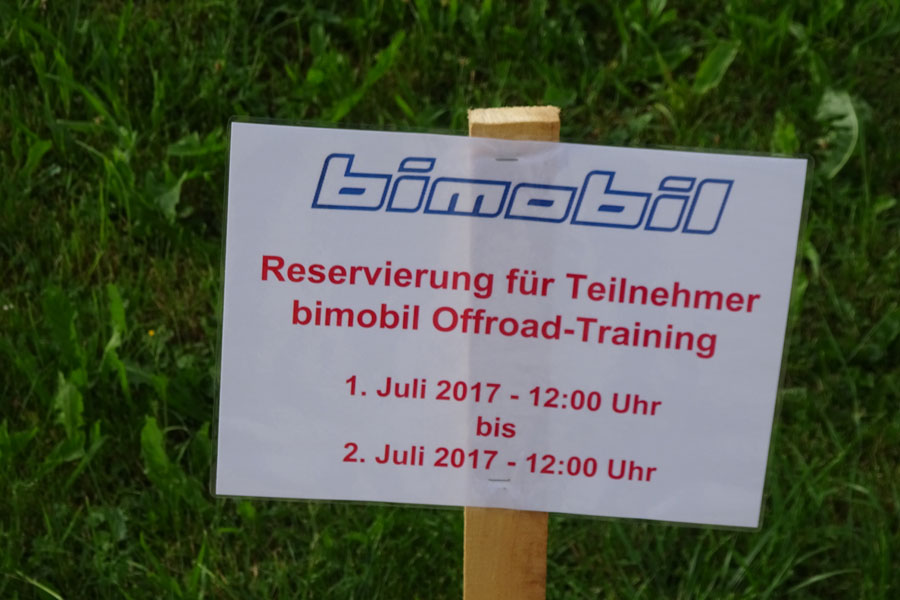 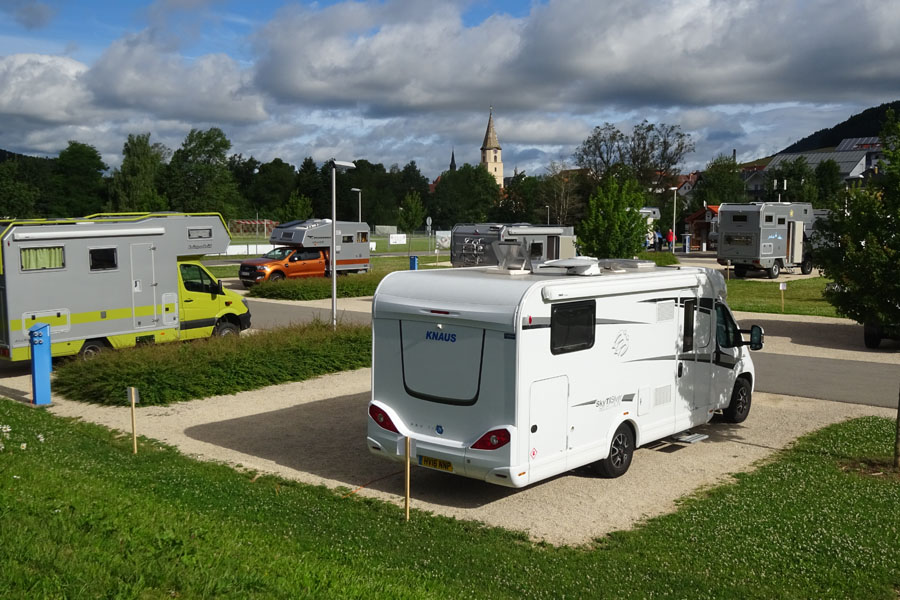 Our first port of call today was one of the many Getränkemarkt (off licences) that we’ve seen, and I was in luck as they had some gluten-free beer in stock. From there we drove the short distance onto Überlingen, on the banks of Lake Constance – the huge lake which borders Germany to the north, and Switzerland and Austria to the south. The stellplatz cost a reasonable €10, coming with electricity and free bus tickets to get into town.

The town is beautiful, with lots of half-timbered buildings and quirky statues and sculptures dotted around the place, not to mention the views across the lake, which even on a cloudy day like today, were superb. 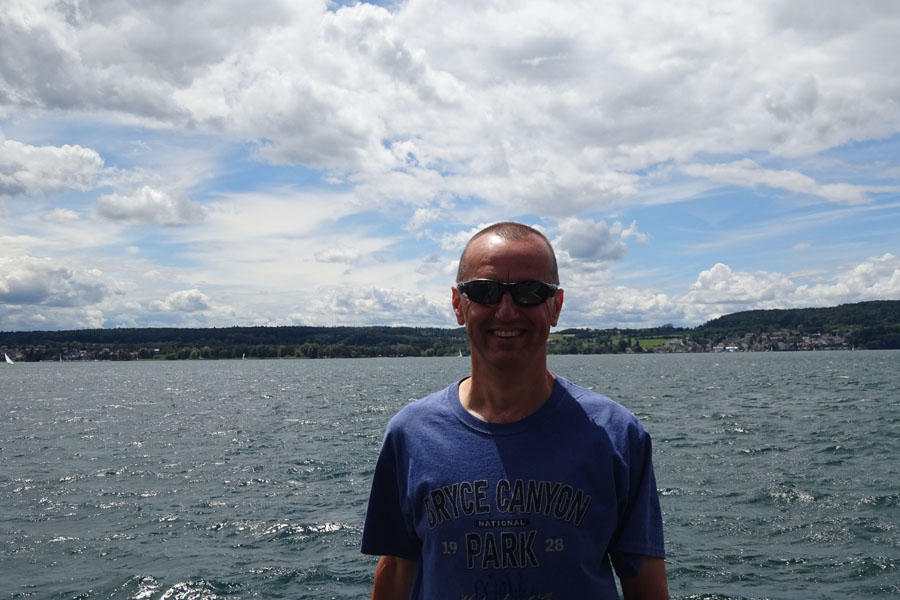 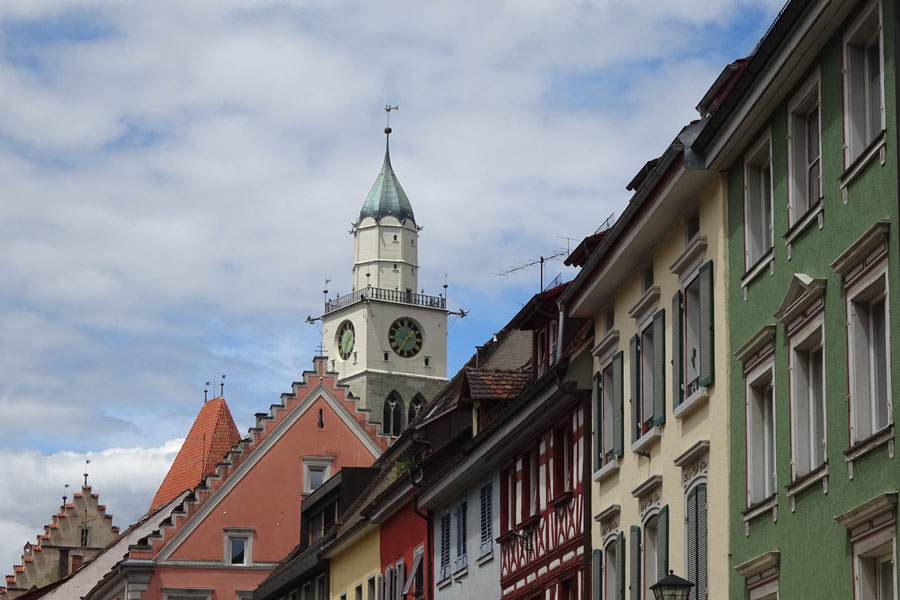 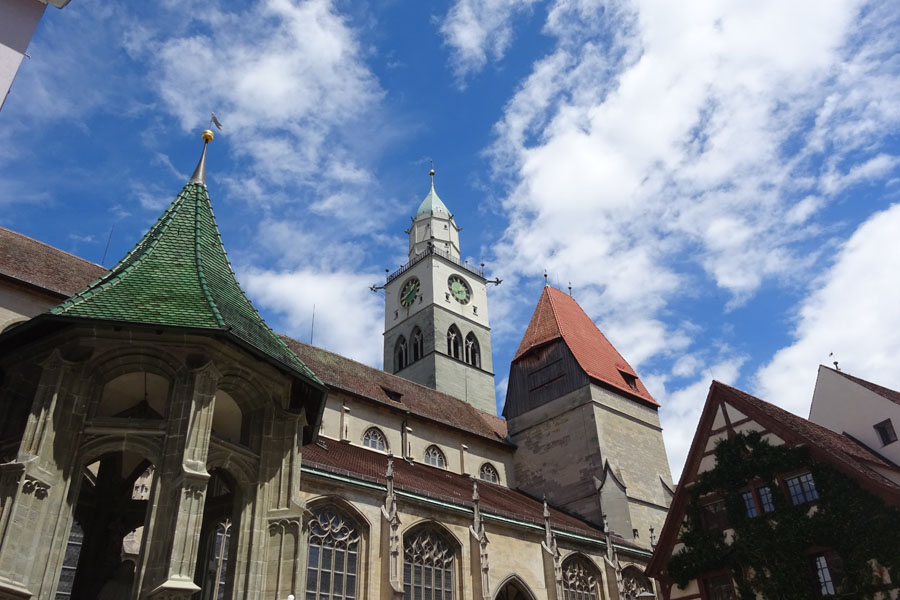 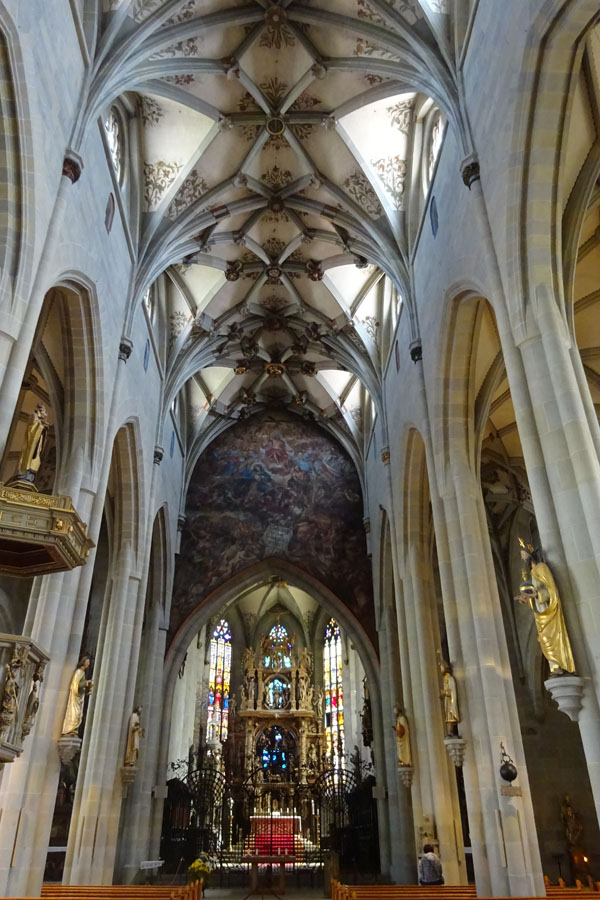 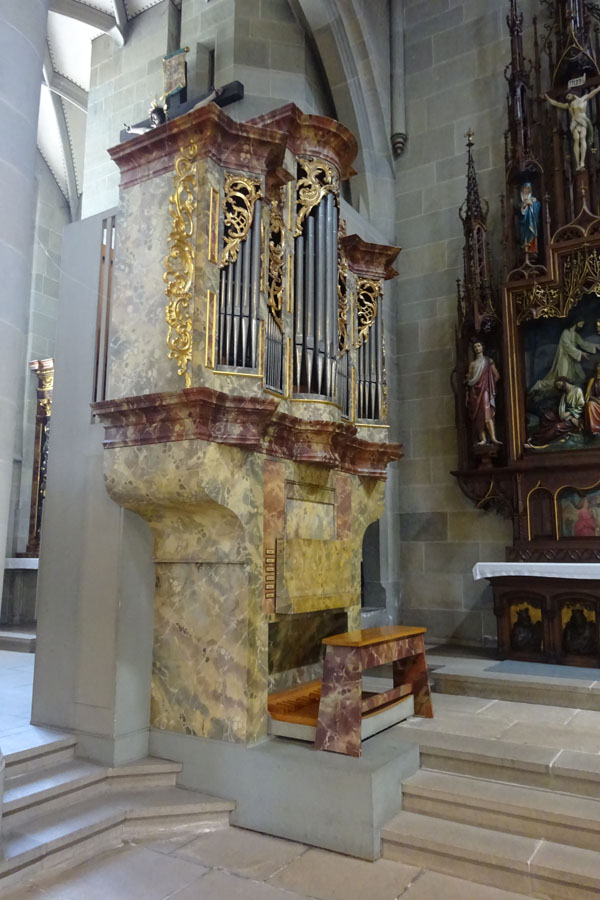 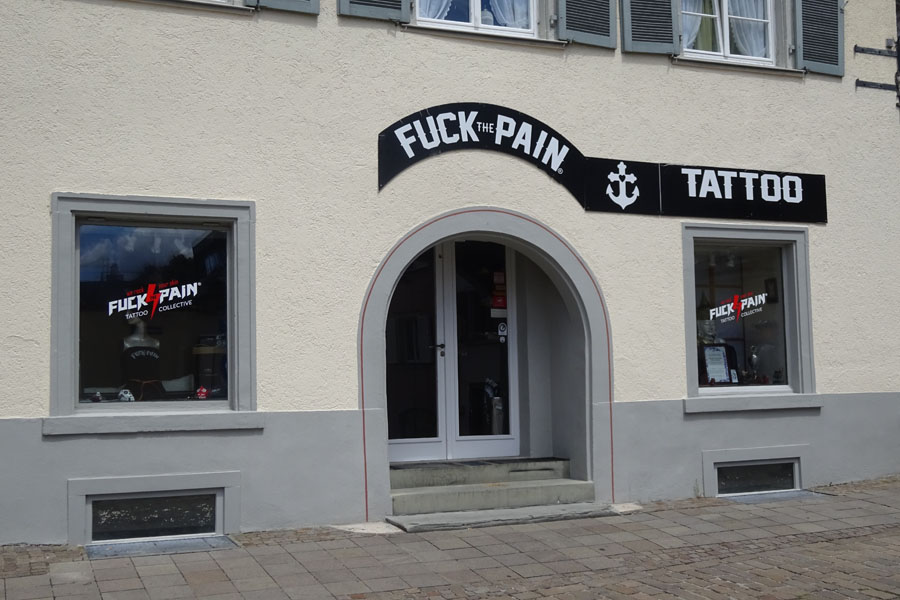 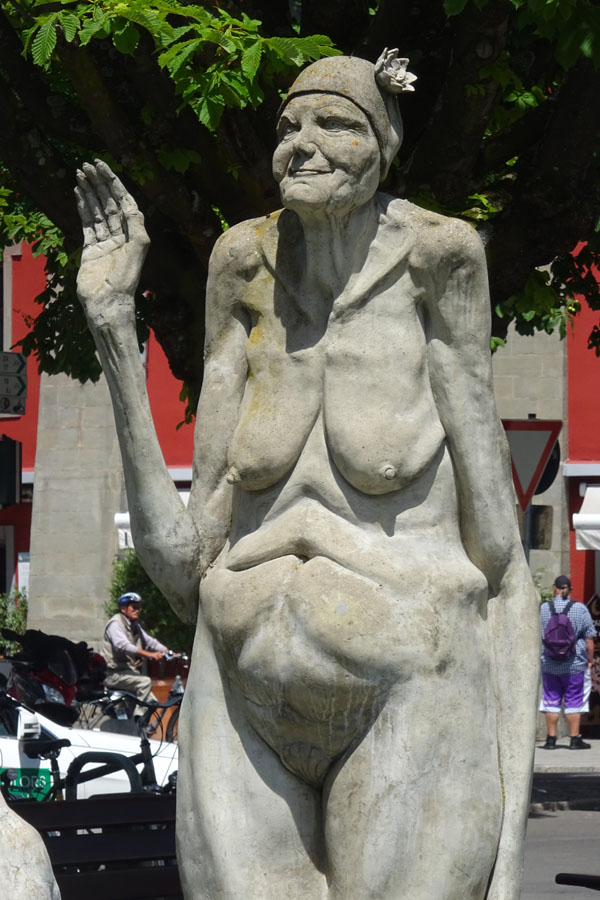 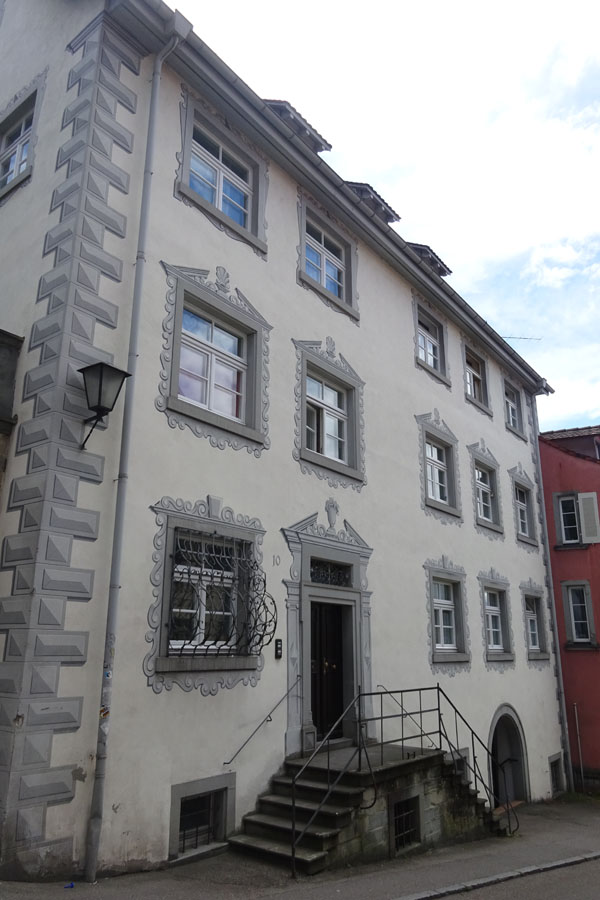 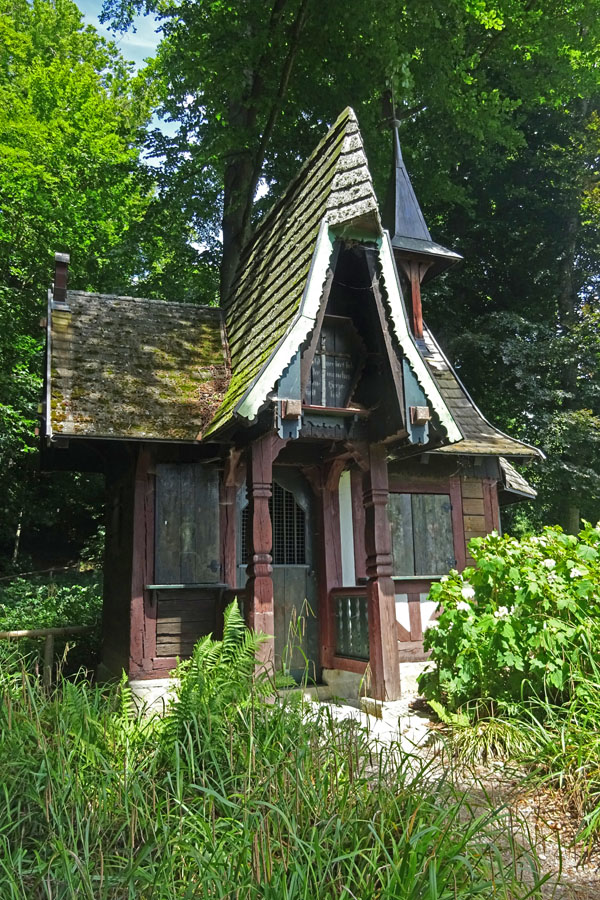 Today’s the first day of Le Tour de France, so back at the van I tuned into ITV4 to watch the action. Hopefully we’ll be able to keep receiving the satellite signal as we cross Germany so that I can watch the highlights most evenings.

2 thoughts on “From Oberkirch to Überlingen”