We soon found the old town which was very nice, though very touristy with lots of tat shops. It wasn’t too busy, but we did see quite a few people in hiking gear and heavy-looking back packs and walking poles.

The cathedral, a UNESCO World Heritage site, is undergoing significant renovation. With the main entrance covered in scaffolding, we entered by the side entrance and had a look around inside. The pews were almost full, and around the edge were confession booths in numerous languages. It was all very well, but if I’d spent weeks on a pilgrimage, then I’d have been very underwhelmed. 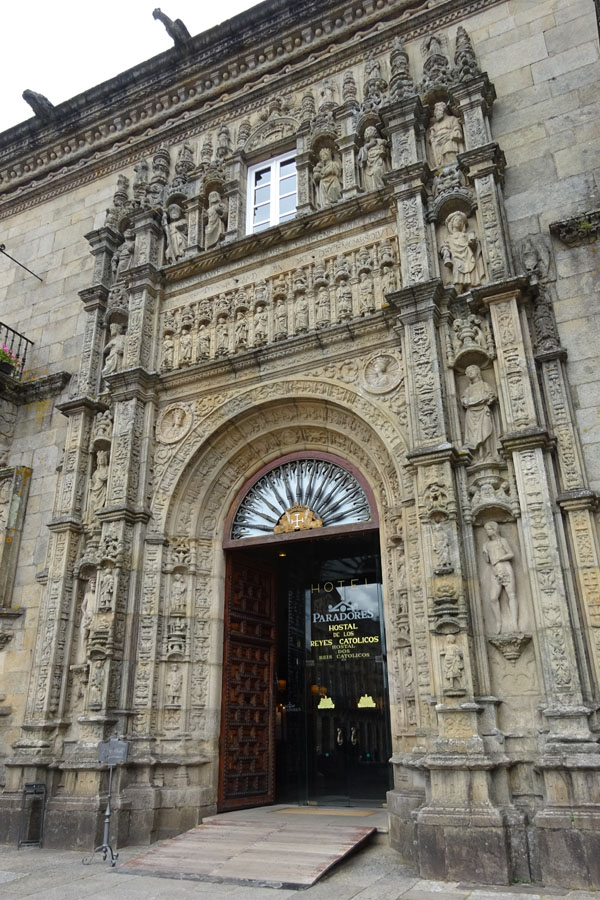 It’s been one of those early Summer days where it’s nice and warm when the sun’s out, but very cold when it clouds over. After a wander round the old town we returned to the van and set off for tonight’s aire, in a remote village by a lake. However, the sat nav tried to send us down some dirt tracks not suitable for the van, so we gave up on that and chose another aire in Guitiriz. It’s free, with just four spaces and has free electricity too, so we were half expecting it to be full, but it was empty when we arrived and we’re still the only ones here.

Tomorrow, if all goes well and we can get parked up, we will go to A Coruña, Galicia’s main city, before moving onto an aire on the north coast. We’ll hopefully find an El Corte Inglés so that we can spend the €80 gift voucher we won from Repsol.