On Wednesday we drove about three quarters of the way from Trondheim to Kristiansund, and stopped for the night close to the Halsa ferry. We should have paid 100 NOK, but nobody called to ask for the money so we had another night of free camping – which is a good job as we clocked up another 140 NOK in road tolls along the way.

The next morning we drove straight onto the ferry, and 50 km later we arrived in Kristiansund. We parked with a couple of other vans in a free museum car park by the marina. The town is split over four islands, but we just stayed on the largest island Frei, and went on a nice long walk in the sunshine along the marina to the harbour and town centre.

It’s famous for its clipfish (bacalao, or salted cod), and there were several fish and chip shops. We already had dinner in the fridge, so had to give the fish and chips a miss. In the afternoon we got the chairs out and sat outside reading, making the most of the good weather.

Yesterday the weather changed, with dark grey skies and very heavy rain. It was my birthday, and the plan was was to drive to Ålesund, park on the aire overlooking the bay, and then spend the afternoon and evening sightseeing and having a nice meal out.

We left Kristiansund, and after having driven through the Atlantic Tunnel we picked up the Atlantic Ocean Road, which is another of the national scenic routes (apparently once rated as the best road trip in the world by the Guardian newspaper), though the visibility was so poor that we couldn’t see much at all. After taking the Molde to Vestnes ferry, the rain subsided and we continued on our way to Ålesund, arriving at about 3pm. The aire is big enough for about 35 vans, but unbelievably it was full. With no other motorhome parking near the town centre, we consulted the Park4Night app and decided that we’d have to wild camp near the aquarium 5 km outside of town, and return to the aire this morning. When wild camping, there’s always the risk that you can be asked to move on, so it must be the first birthday since I was 13 where I’ve not had a drink!

This morning we returned to the aire at 9:30 and arrived just as a van was leaving, so we parked up and spent the day walking around the town. The weather was much better – sunny with blue skies, though not quite t-shirt weather with a cold breeze coming in from the sea.

In 1904 the whole town was destroyed in a fire, with gale force winds fanning the flames that took hold of the timber buildings. By 1907, with help from Kaiser Wilhelm of Germany, the town had been completely rebuilt in brick and stone in the Art Nouveau style for which Ålesund is famous.

In the afternoon we climbed up the 418 steps (and the rest!) of Aksla, giving the most superb views across the town. We also found a good fish restaurant and had a lovely meal of fish and chips, and will open a bottle of wine this evening. 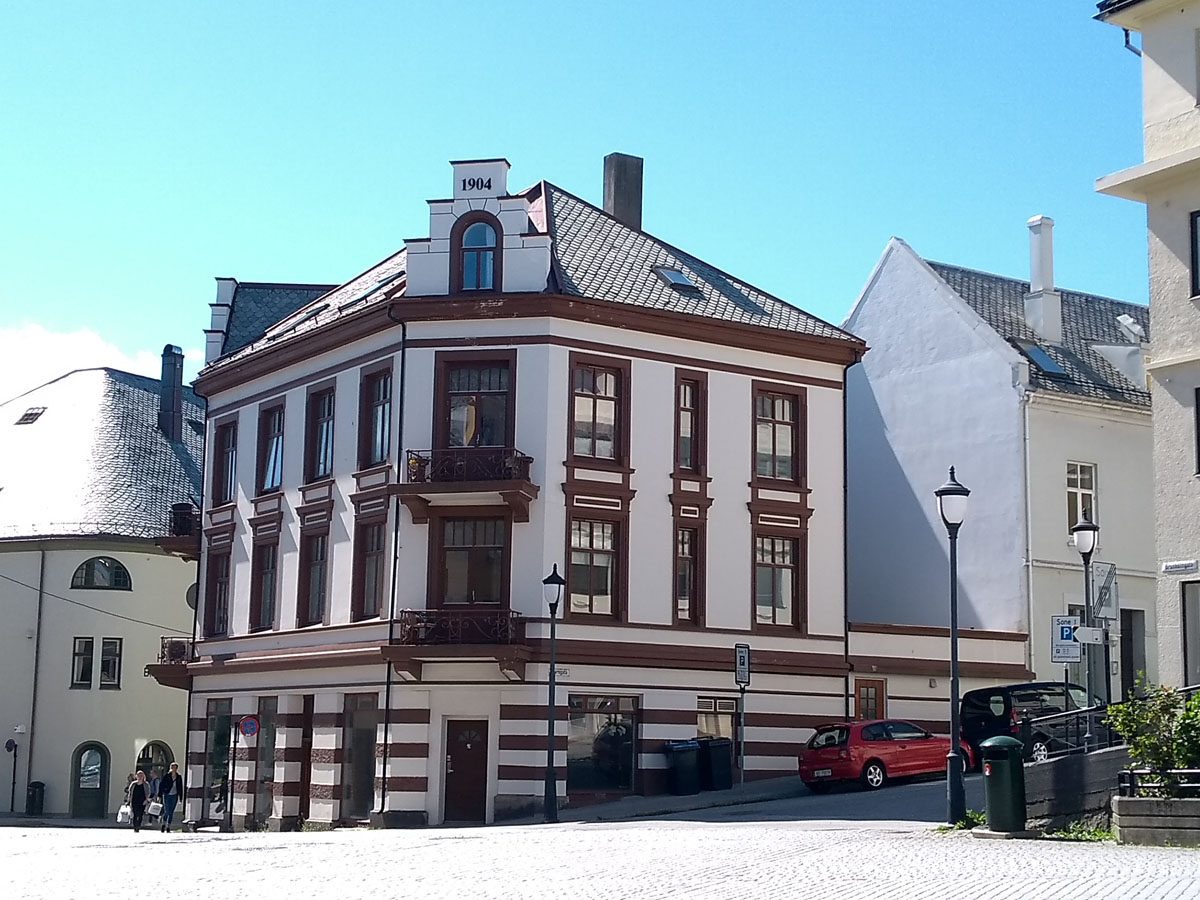 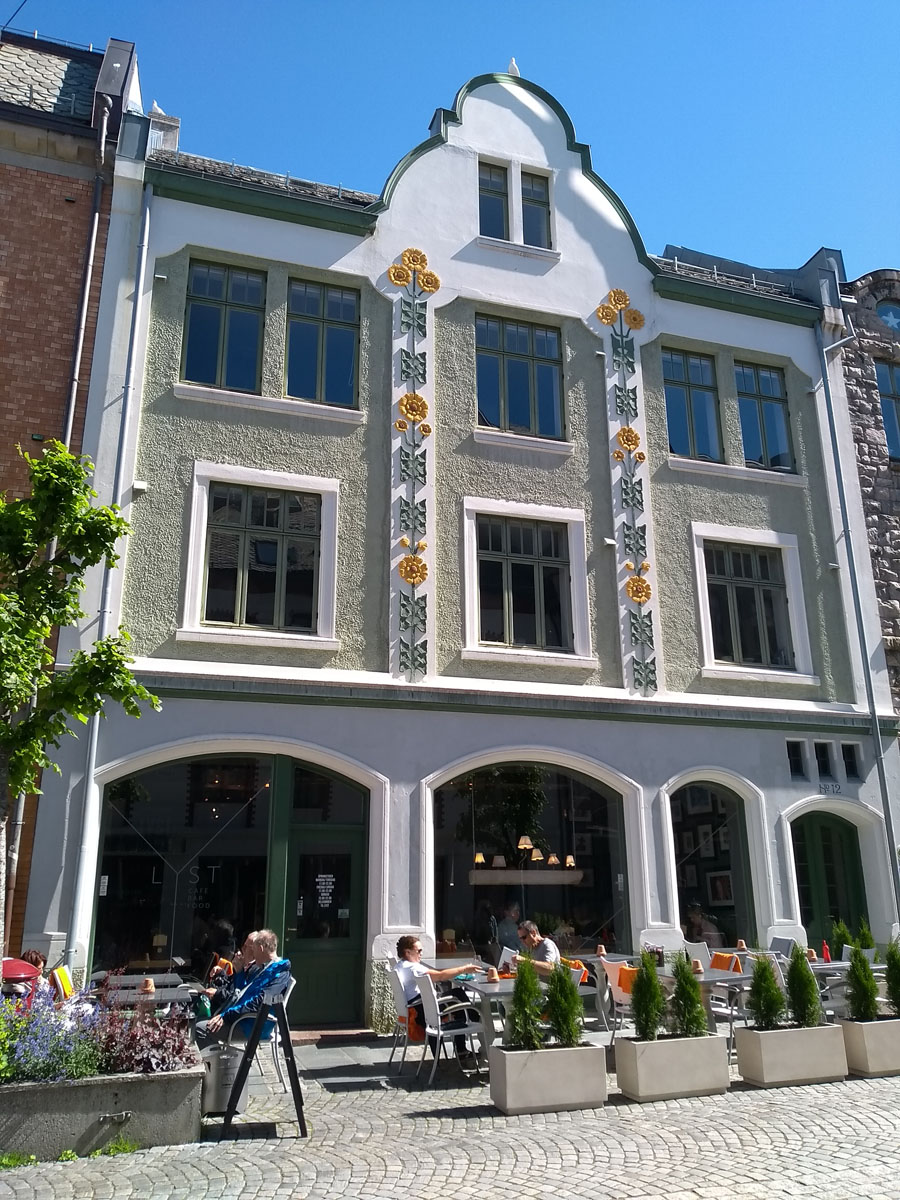 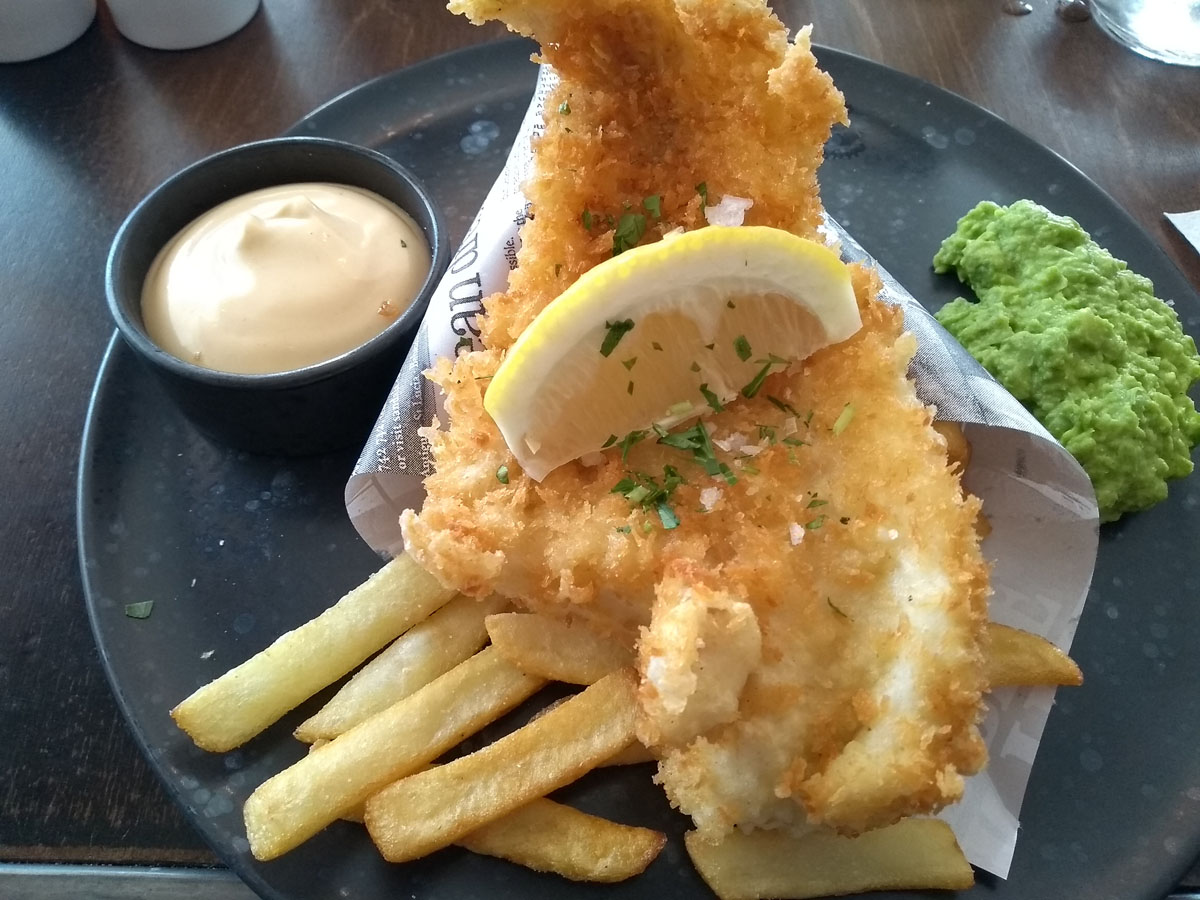 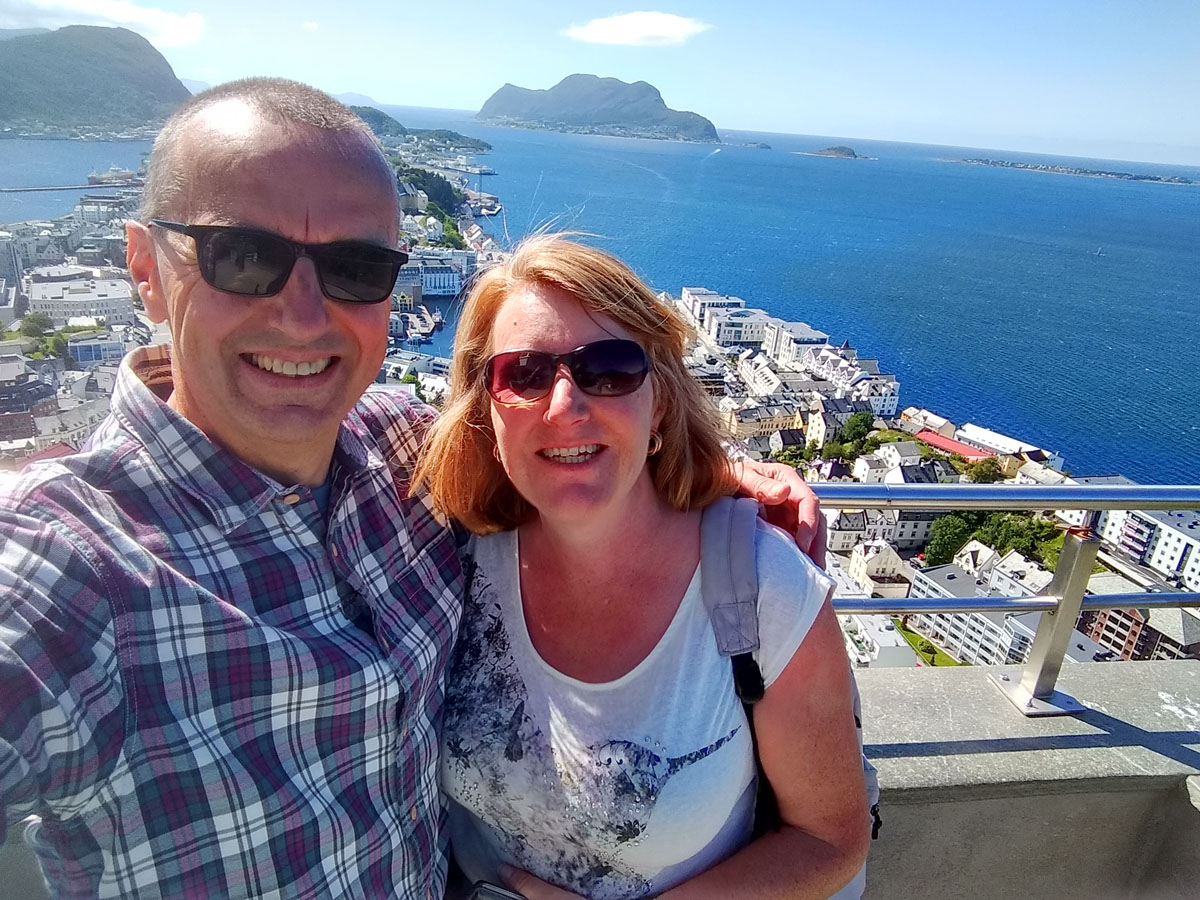 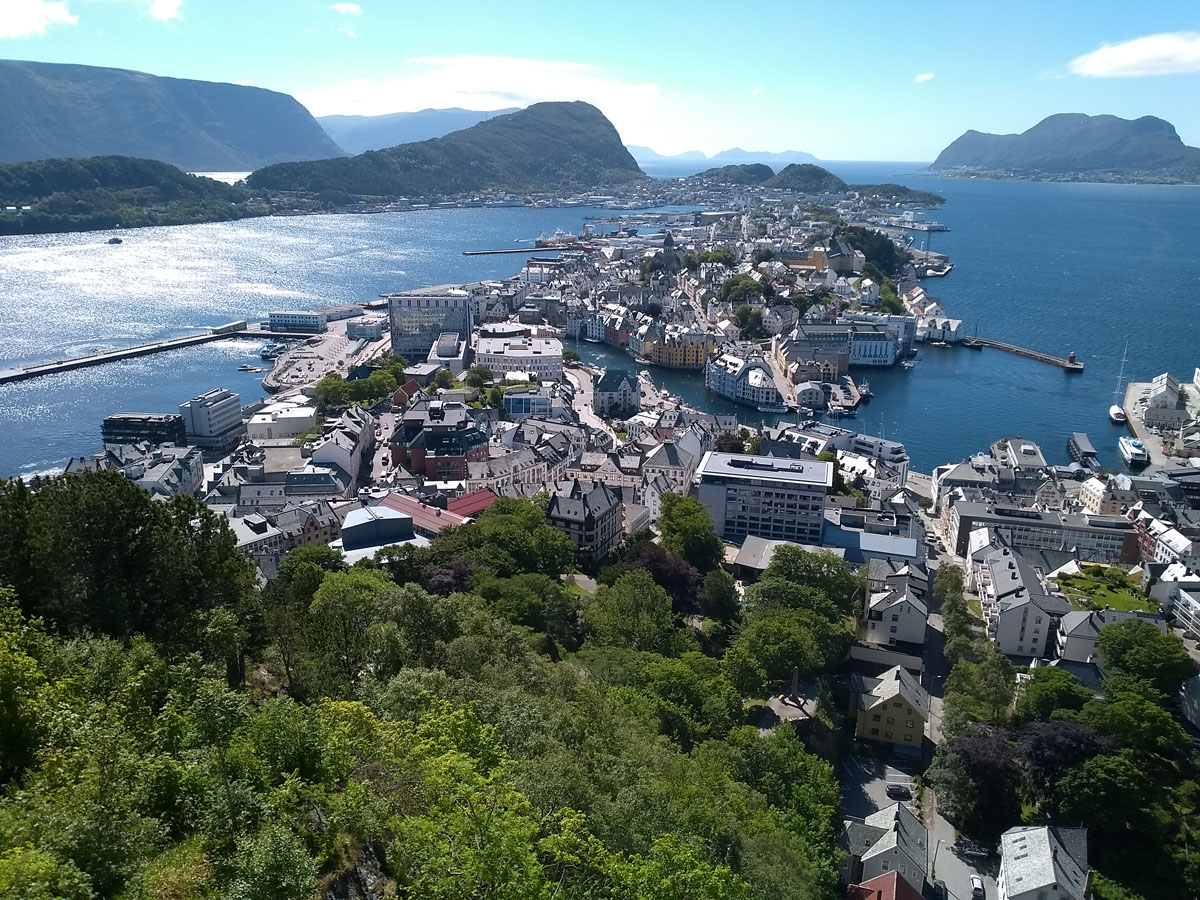 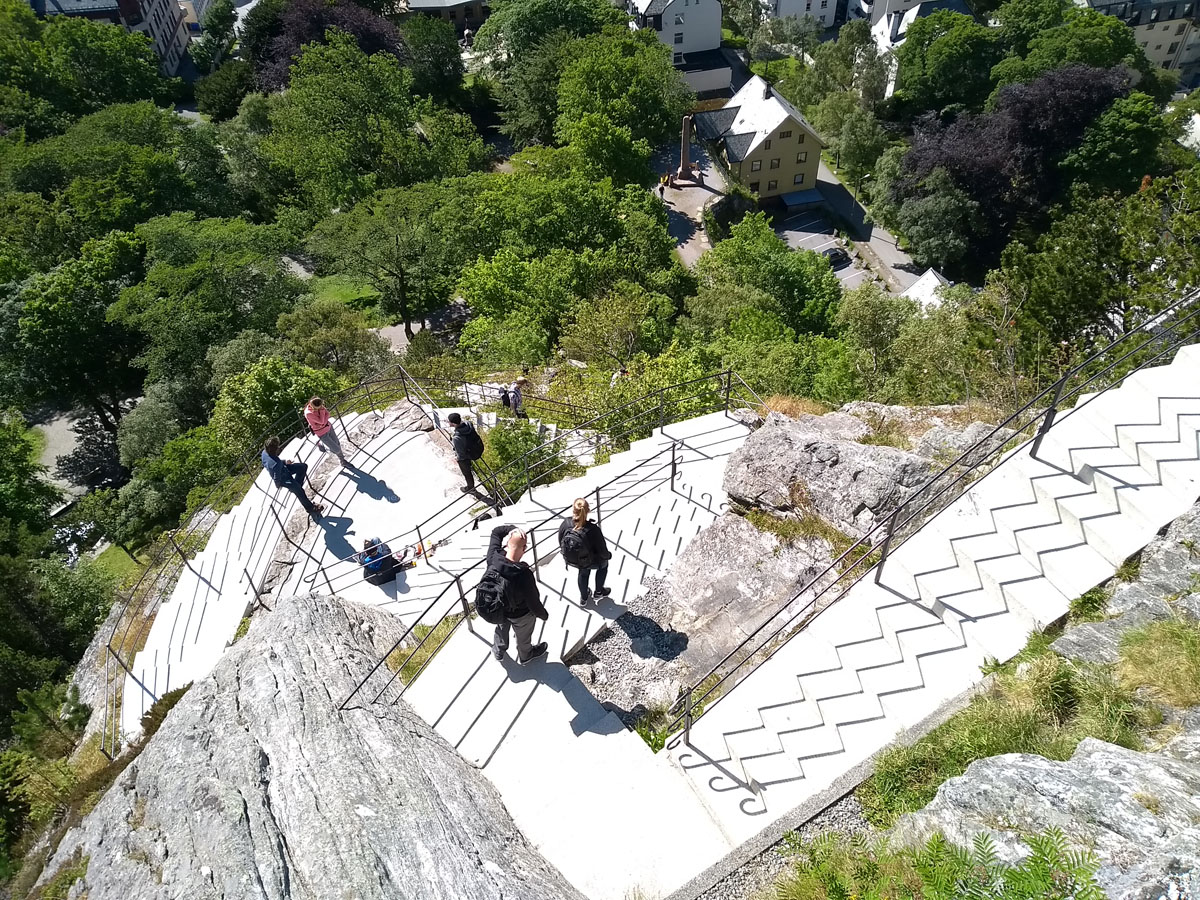 2 thoughts on “Kristiansund and Ålesund”