We made an early start, and were second in the queue at Gerainger for the 9:30 ferry to Hellesylt. Two cruise ships were anchored out in the fjord, with 20 or more coaches waiting for the passengers who were being brought ashore in small boats. I don’t think that I could ever go on a cruise!

The ticket guy for the ferry knocked for payment, but didn’t ask us how long the van was. Instead he seemed to assume that we were six metres and charged us accordingly: 865 NOK instead of 1,400 NOK. We didn’t query it and so were charged 535 NOK less than anticipated, which will cover the cost of the road tolls for the bridge and tunnel the other day. Swings and roundabouts and all that!

It was another beautiful day and so we enjoyed the hour long cruise along Geiranger Fjord sat on the upper deck. Entertainment was provided by the passengers from one of the tourist buses who would not sit still for five minutes, taking endless selfies and photos of each other for the whole hour. They certainly didn’t seem to appreciate the fantastic scenery.

From Hellesylt it took a couple of hours (with a coffee stop and via the supermarket) to reach the campsite at Oldedalen. It’s called Melkevoll Bretun, and came highly recommended by Our Tour, Our Bumble, Home On Wheels and other bloggers. Located in a valley of the Jostedals Glacier National Park, it’s situated between two legs of a glacier. Behind us there’s a waterfall crashing down some 350 metres from the top of of the rock, the water flowing away in a stream of rapids running to the side and in front of us, so there’s a permanent background noise of running water which I love. The pitches have loads of room and it’s very peaceful – a great place to spend a few days.

Yesterday we climbed up to the edge of the glacier some 3 km away, passing quite a few waterfalls along the way flowing at 10,000 litres per second. The scenery here is just spectacular – Mother Nature at her finest – and the lake by the glacier was so blue it didn’t look real. We took loads of photos, but they don’t do it justice. 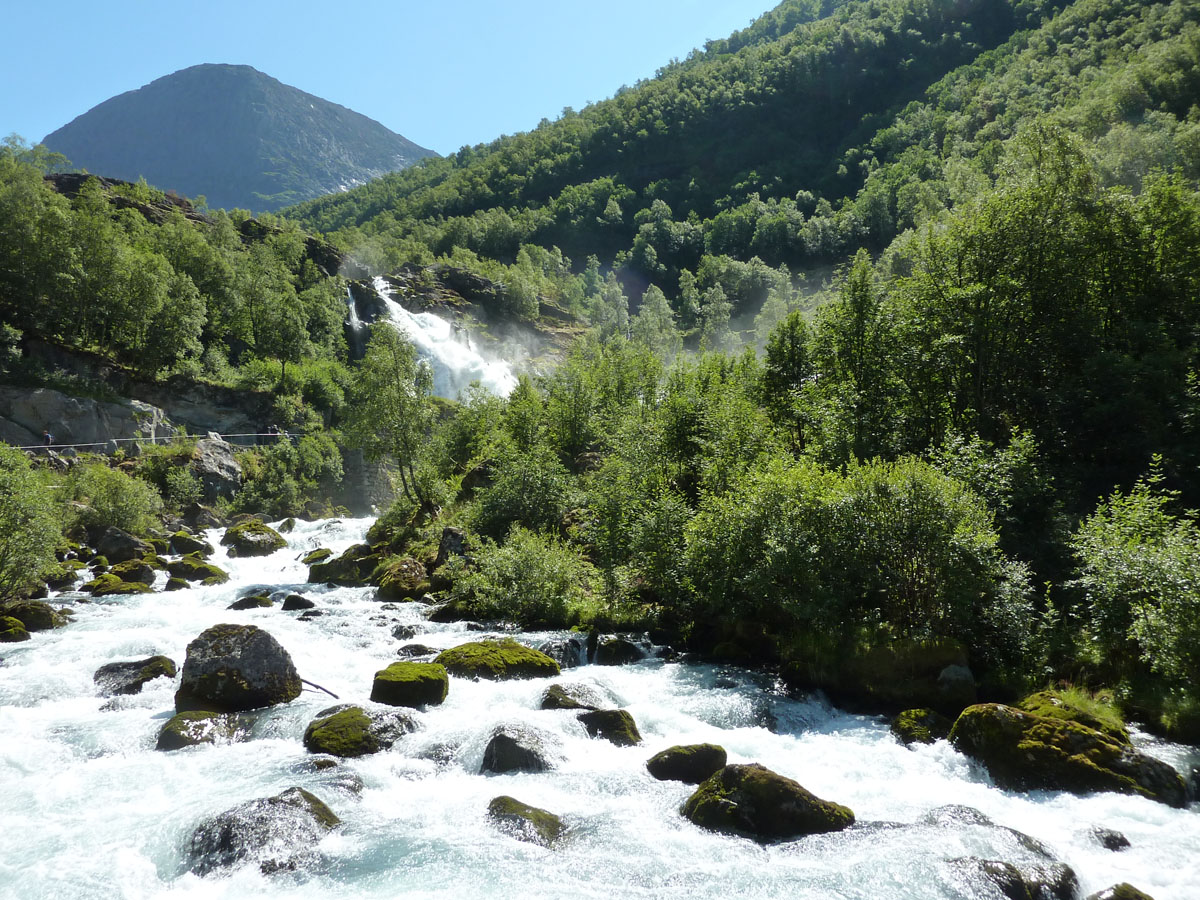 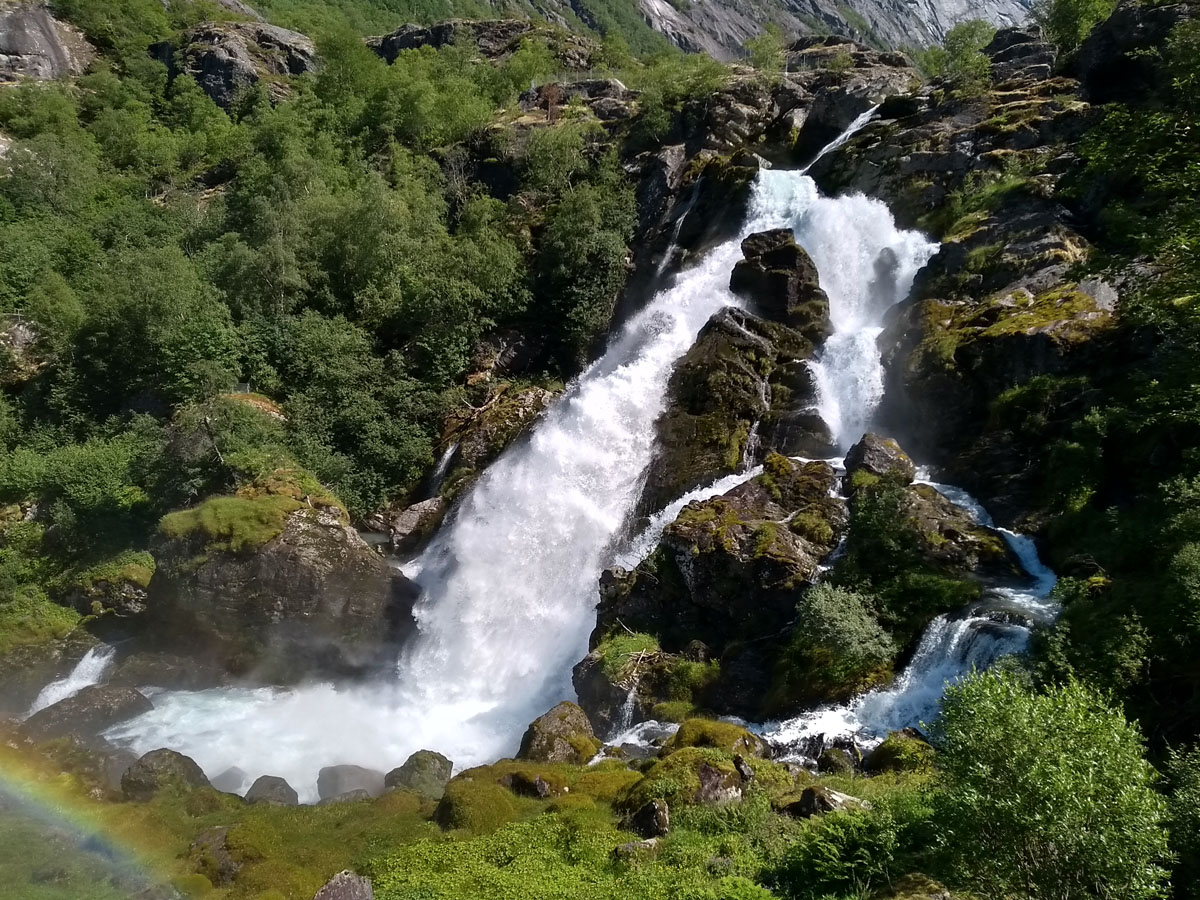 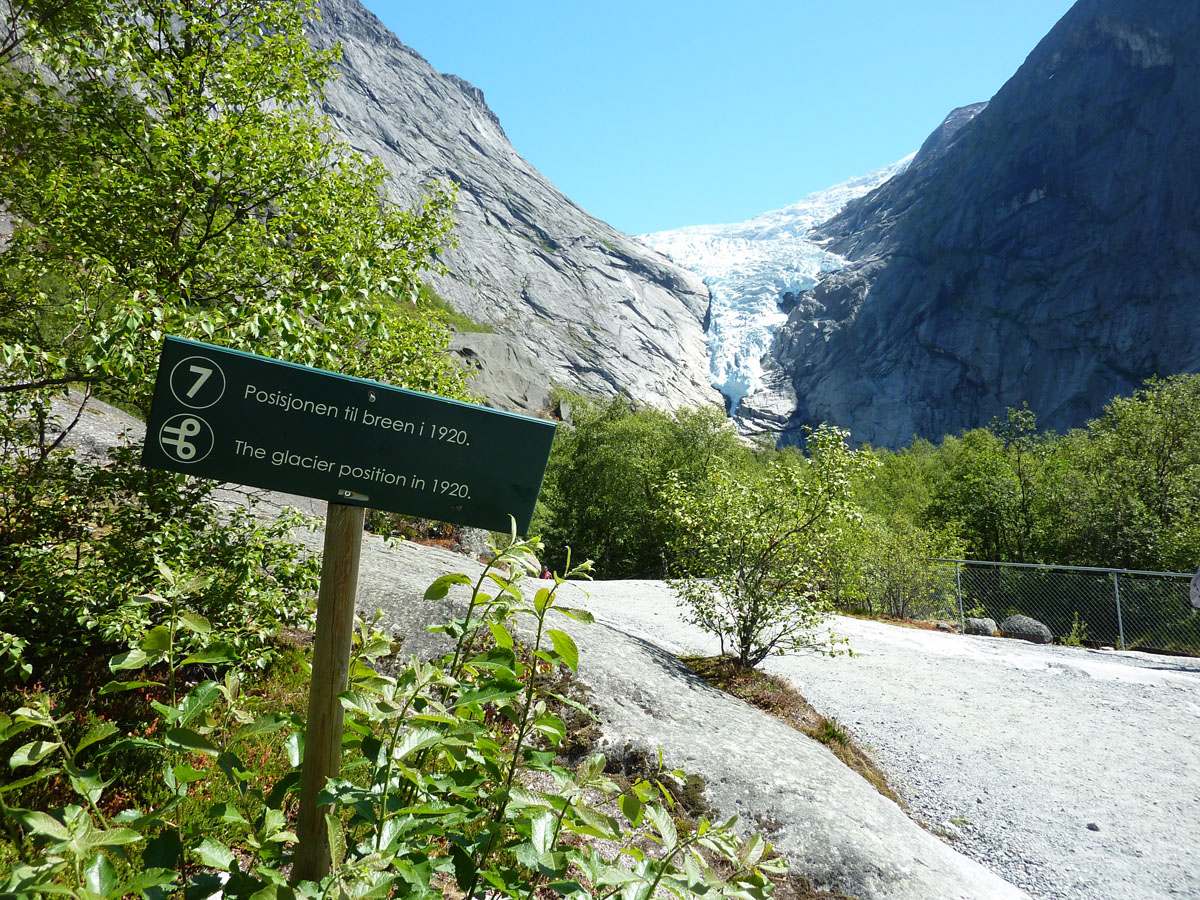 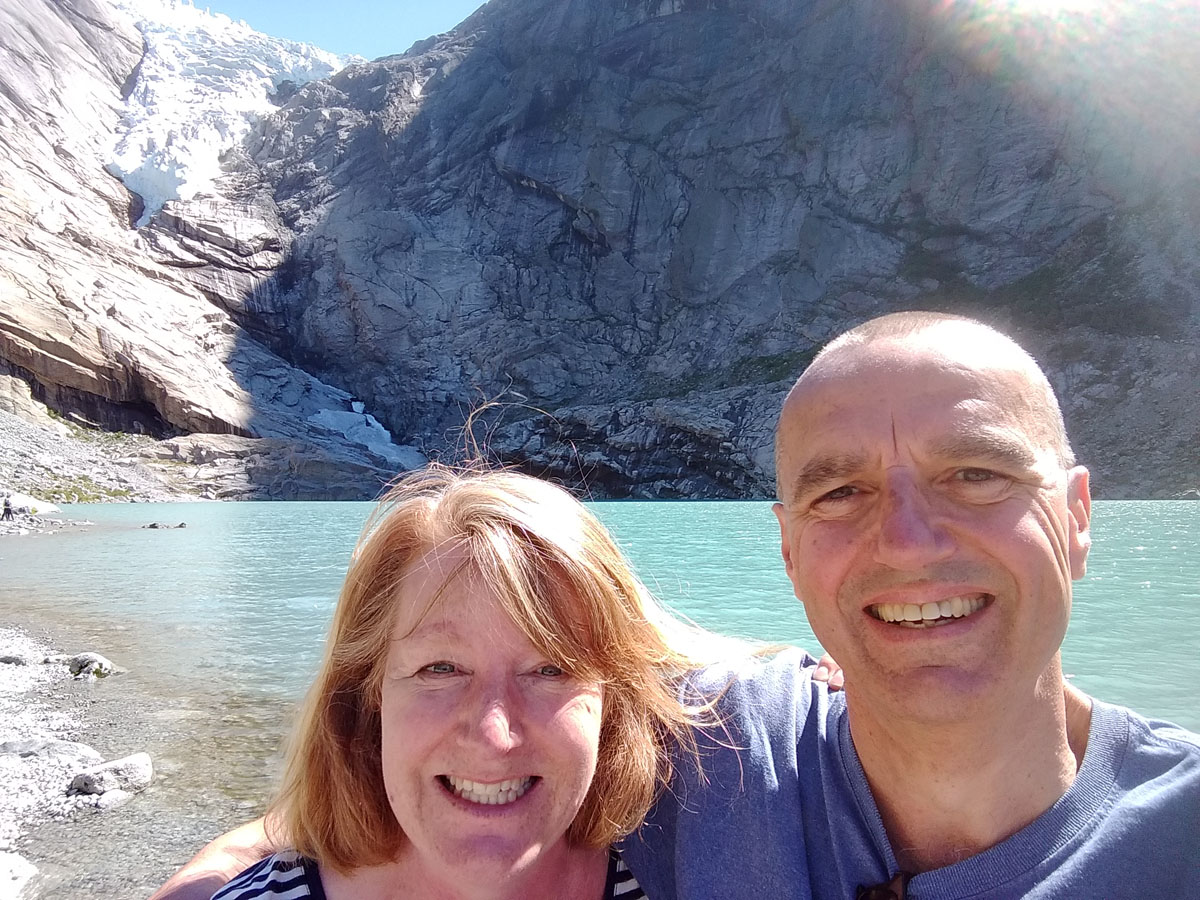 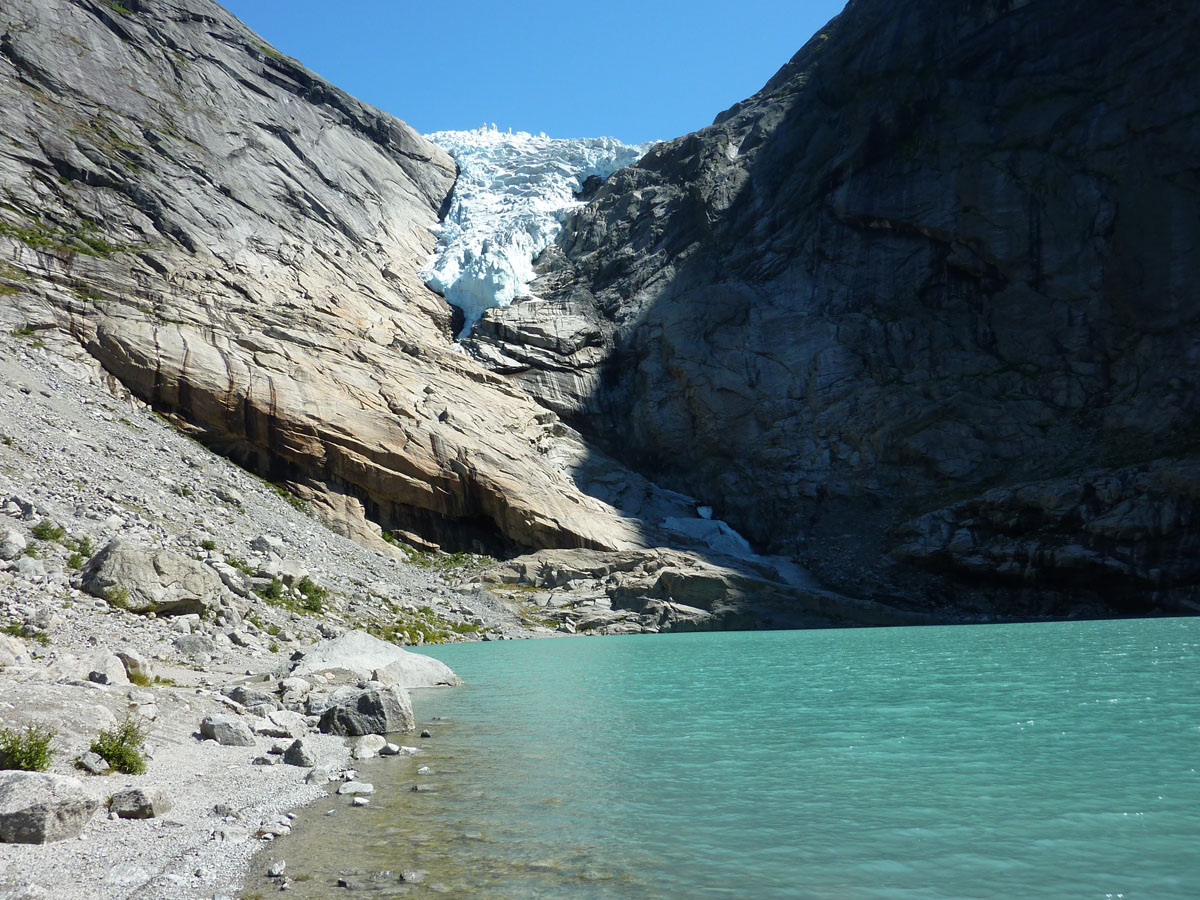 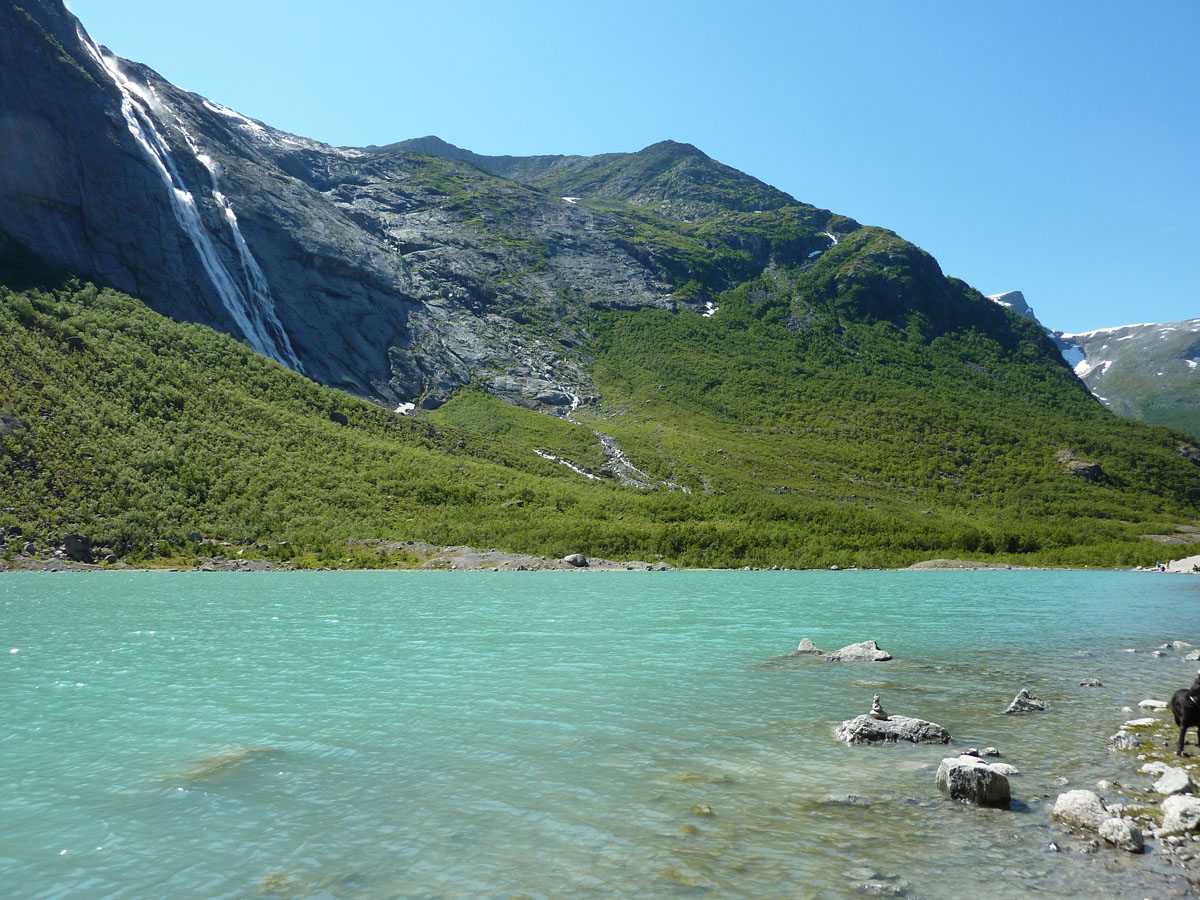 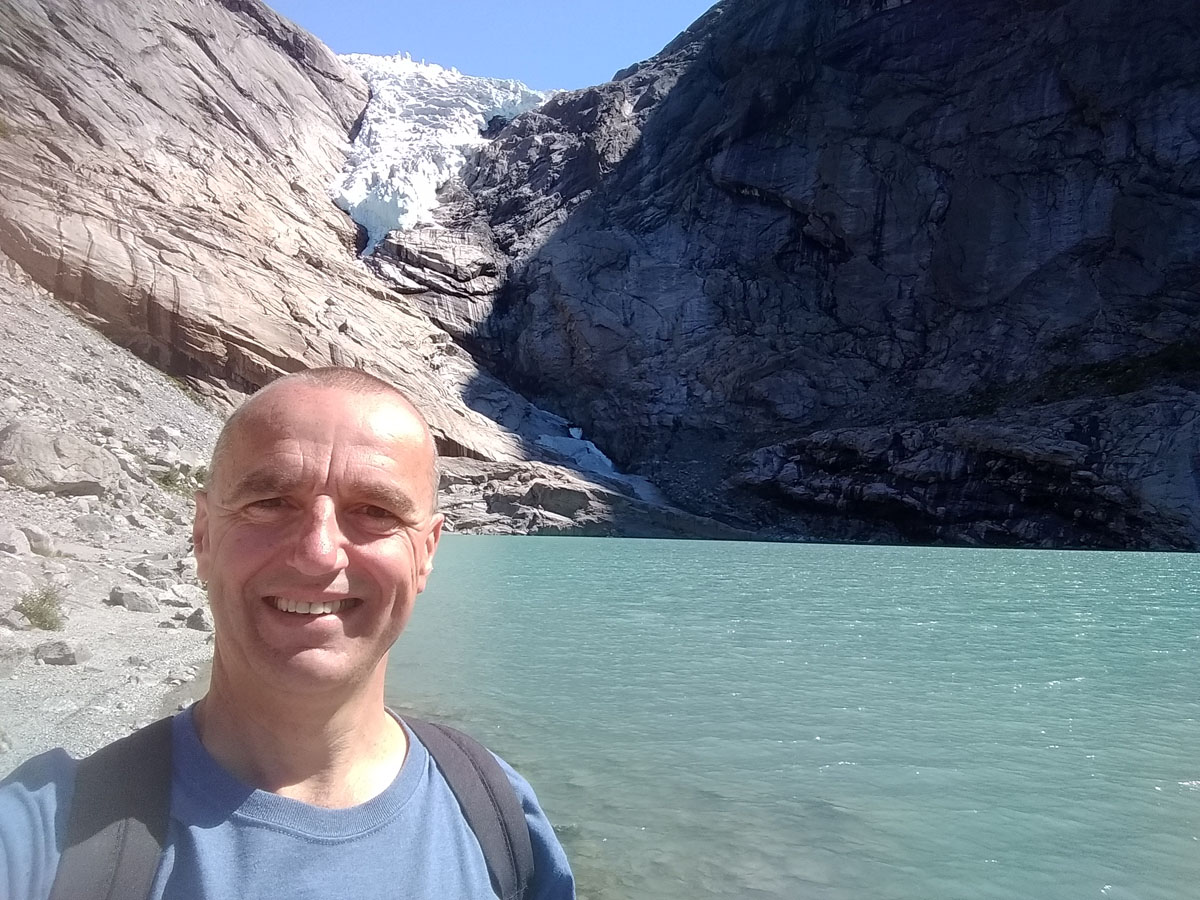 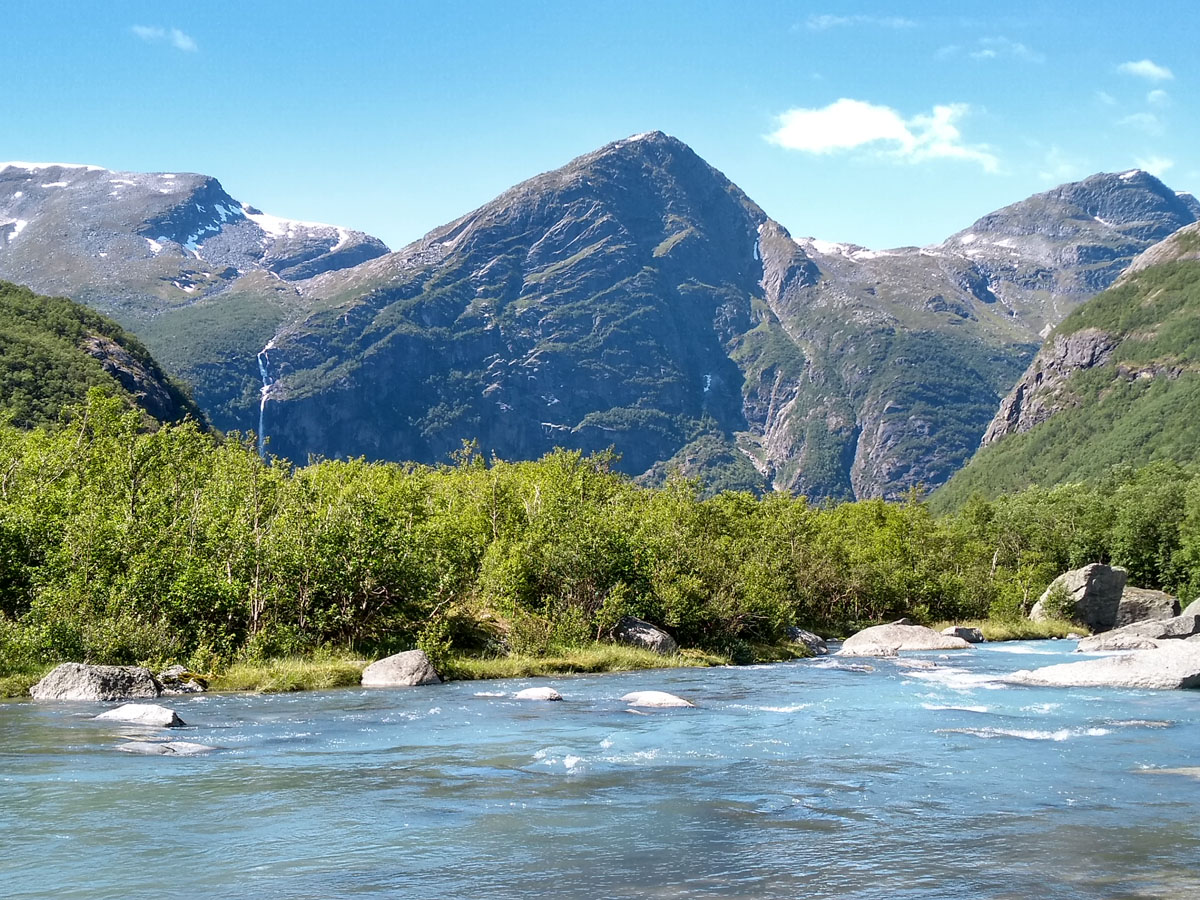 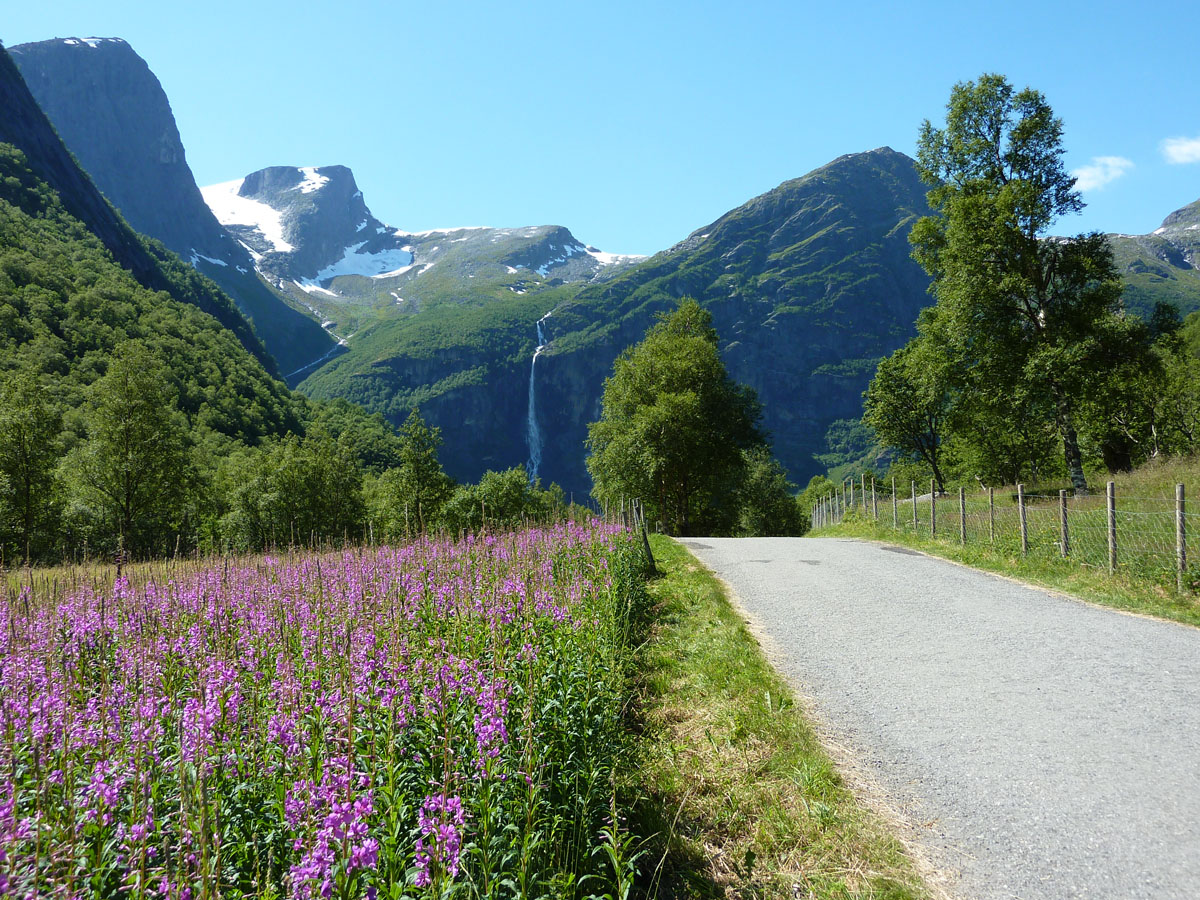 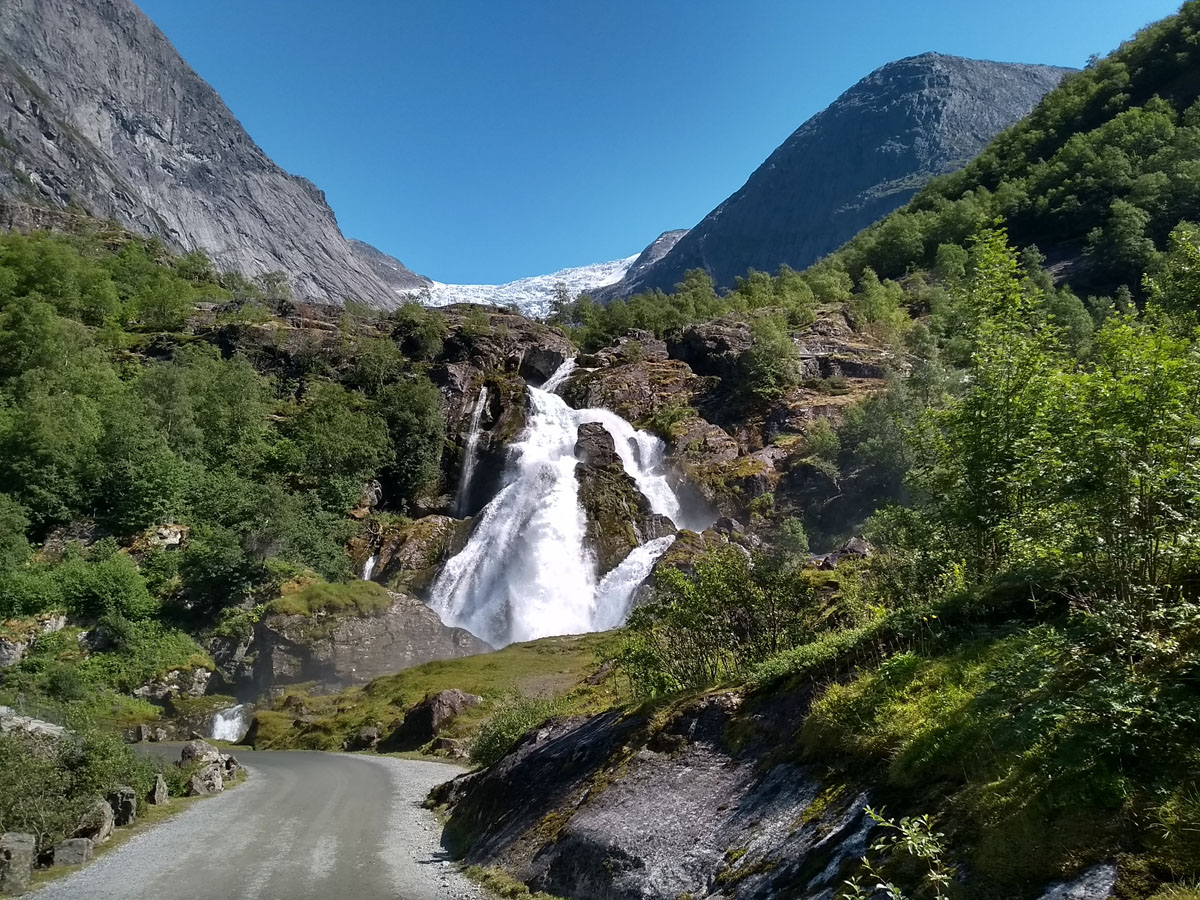 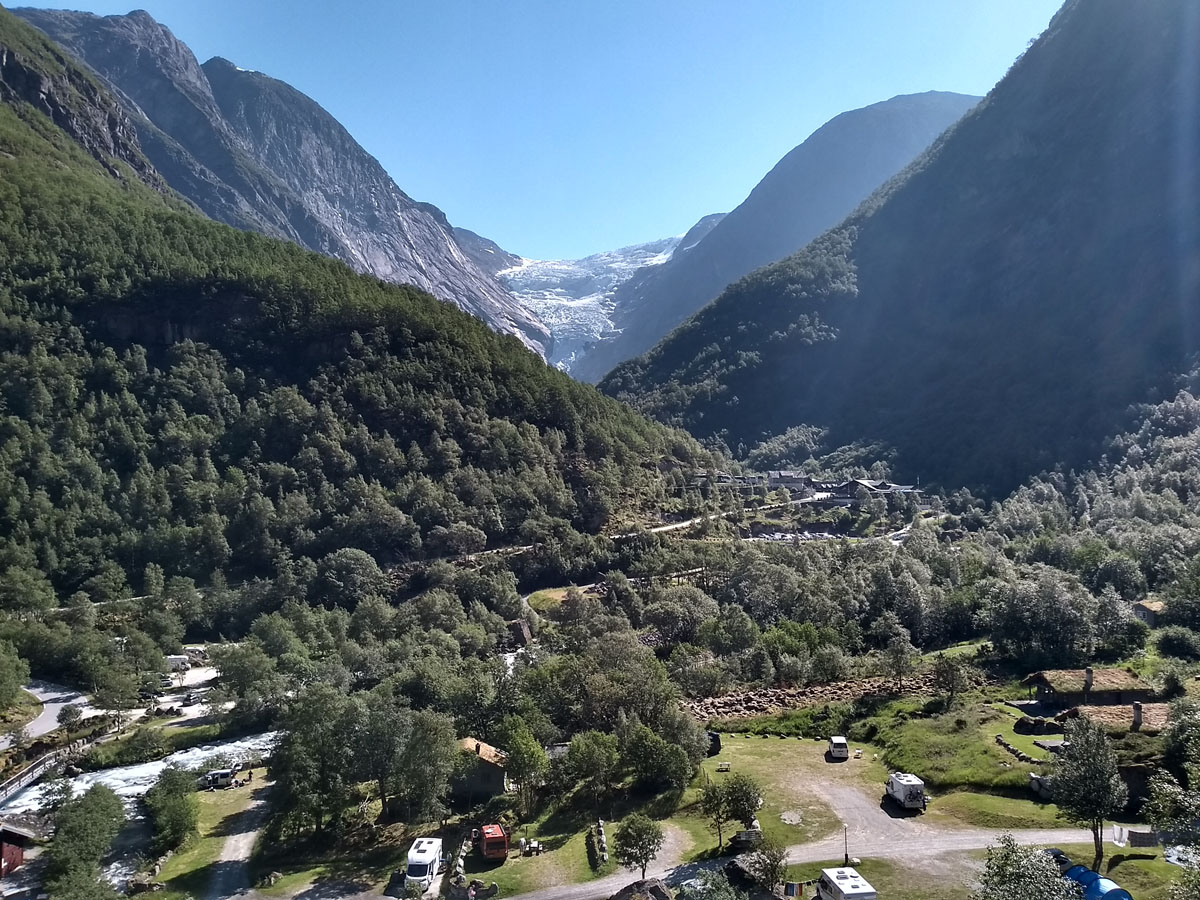 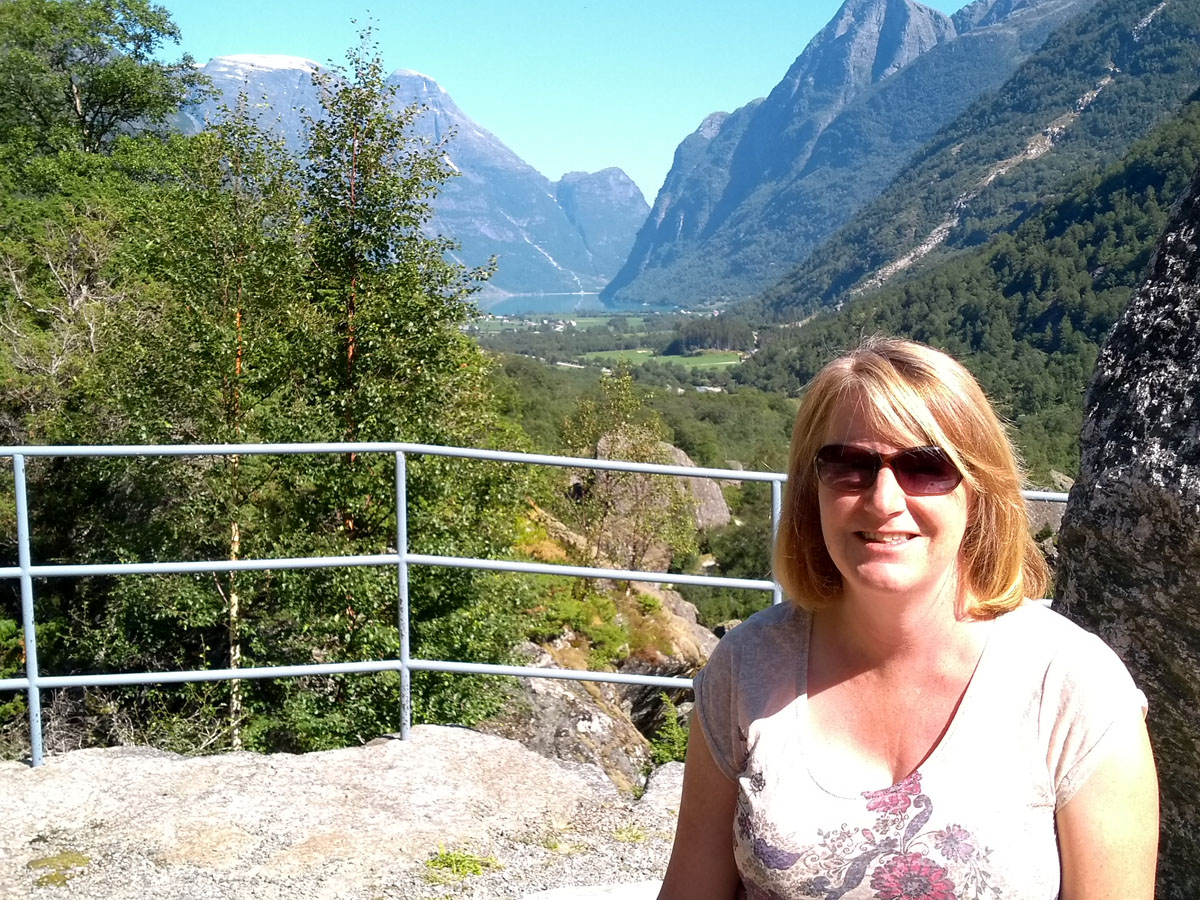 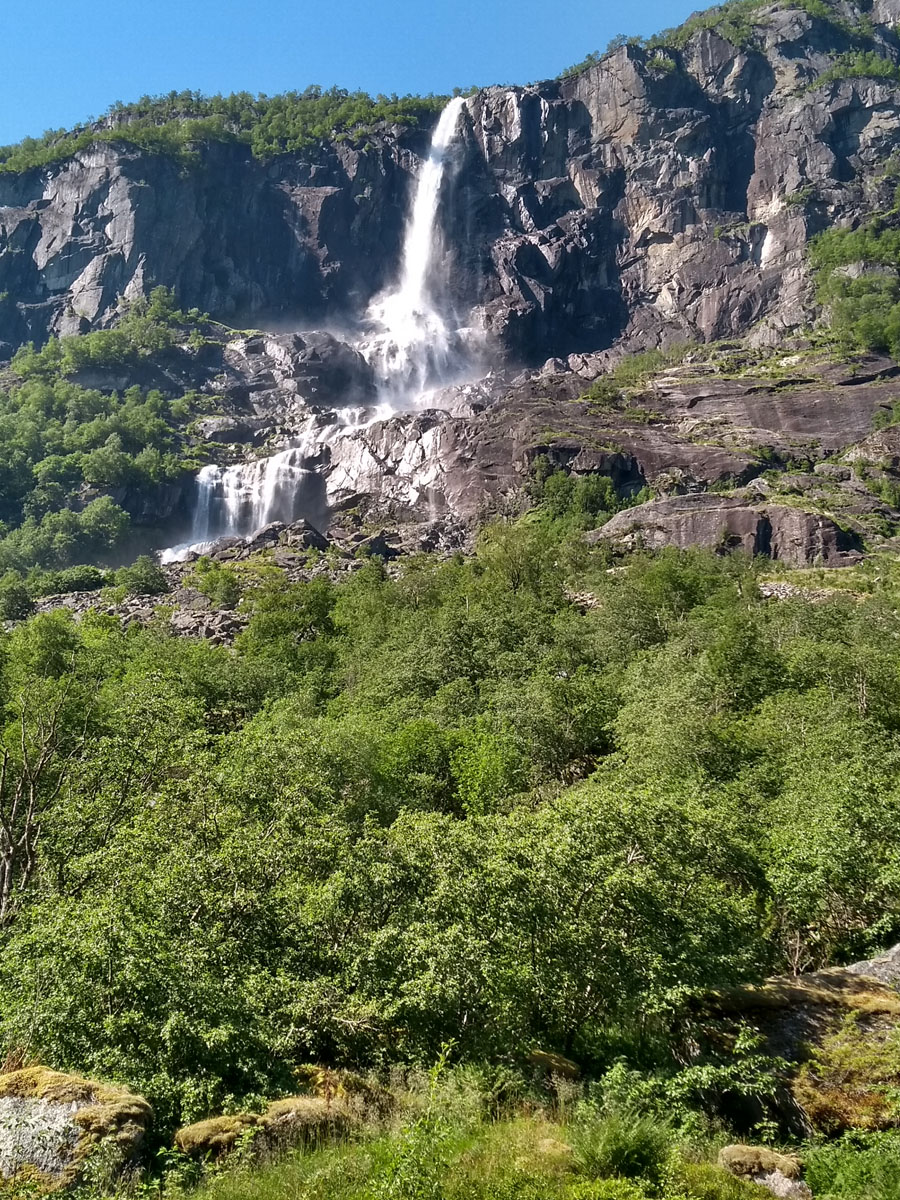 The football world cup is on at the moment, though you wouldn’t know it as all we’ve seen is a few half-hearted promotions for beer and snacks in the supermarkets. I’ve not been able to  watch any matches as we’re too far north for our satellite TV to pick up any channels, and so the only way of following the England games is via live web updates. I tried to stream the penalty shoot out on my phone last night, but the ITV player app wouldn’t load – grrrr!