I know it’s been a while since the last update, but we really haven’t done much at all. The weather here in Hungary is cold and it’s been snowing on and off.

We spent a week at the Tranquil Pines campsite, but didn’t manage to get out to see Lake Balaton which is a shame – it just wasn’t worth the risk, taking the van out in the snow and ice – so we’ll just have to come back another time! Instead we enjoyed a week of downtime, reading and watching the BBC series of Bleak House by Charles Dickens on DVD, which we enjoyed.

By Sunday much of the snow had melted and, after saying farewell to Sharon and Andrew, we drove to Budapest. Passing a Tesco on the way, we stopped to get some shopping.

With cupboards and the fridge replenished, we continued on our way to Budapest. There wasn’t much snow at all until we arrived at the campsite. It was up a hill and the approach road was covered in snow and ice. We walked up to the campsite to find that it was closed – no surprise there – but there was no way we were going to risk driving any further even if it had been open.

Back in the van, we checked out the options for a Plan B and the best alternative seemed to be Arena Camping (ACSI/€19 incl. tourist tax), so we plugged the co-ordinates into the satnav and set off. The photos indicated that the surface was grass, and we were worried that we might get stuck in the mud where the snow had melted. However it seems that some renovations have recently been taking place, and we were relieved to find that part of the site has been covered in gravel. We’re the only van here, and we’re parked next to the shower block which is heated, always a result! As an added bonus, there’s a washing machine which is free to use, so we’ll be taking full advantage of that. Fortunately for me it’s in the ladies, so I couldn’t possibly assist! 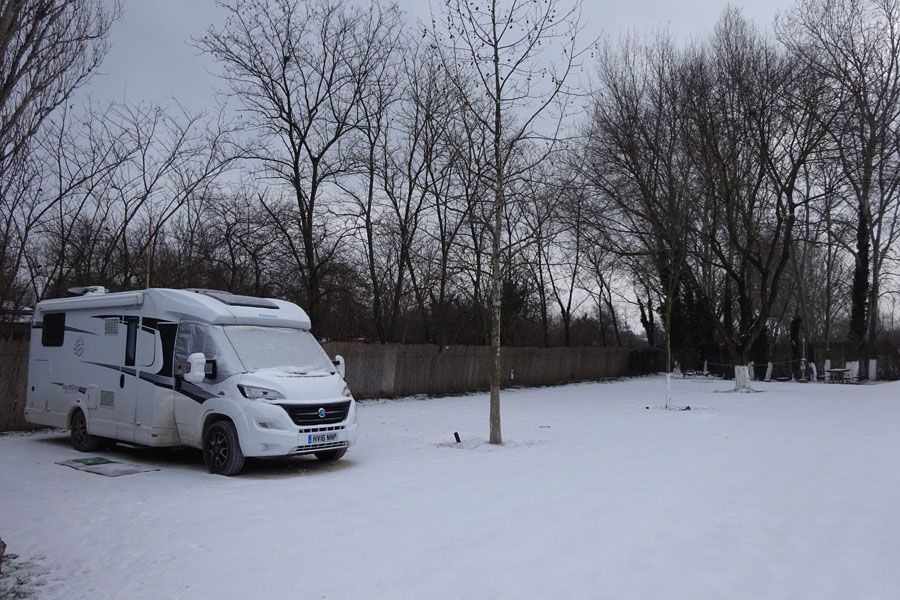 Yesterday morning we drove over to the Fiat dealer to get the van serviced, and made it back to the campsite before the snow started falling again.

The weather front bringing the cold and snow is the same one which seems to be causing havoc in the UK. Last night it was -5°C and tonight it’s forecast to fall to -13°C. We were supposed to drive up to the Knaus factory this morning so that the van could have a habitation check done tomorrow, but we’ve now postponed that for a couple of weeks because of the weather. Instead, we’re going to spend our time in Budapest.

So what’s it like living in the van in the cold weather? Fortunately our van is fairly well insulated, and has an effective blown air heating system. Being on a site we are plugged into the electric hook up most of the time, though when it gets a bit nippy we flip over to gas, which is like switching on the turbo. The only real downsides so far are that the kitchen sink waste pipe has frozen somewhere (not a problem as we use a washing up bowl), and the satellite dish has also frozen up, which is no big deal given that we can only pick up Sky News and BBC World Service from here anyway.

Today we walked to the local shopping mall (about the size of Bluewater in the UK) for something to do, and tomorrow we’ll be making our first trip into the city centre. I’ve been reading an excellent book by Joe Hajdu on the history of Budapest (see our reading list for details) and so am really looking forward to visiting. There’s so much to see and do, and I don’t think we’re going to be disappointed by the food either!

5 thoughts on “Budapest Part One”