The road from Albarracín to Cuenca is 112km of undulating tarmac, winding through the remote mountains. On our Spanish road atlas it’s highlighted as a recommended scenic route, and we weren’t disappointed.

The road was deserted, and in a good state of repair, so it was a pleasure to drive. It meant that I could slow right down and enjoy the scenery from some of the viewpoints. We stopped for elevenses – a brew with a view – and later on parked up for a short walk by the river which the road was shadowing. The skies went a very dark shade of grey at one point, and we could see rain far away in the distance, but fortunately for us the rain held off. Along the side of the road we saw some deer and, a rarity back home, a red squirrel. There were also patches of snow here and there, though not surprising given the altitude.

The aire in Cuenca is well situated, next to a river and away from the road. There’s a weir about 50 metres away, so all you can hear is the water flowing past. I’m looking forward to drifting off to sleep tonight to the sound of that.

The old town is perched high up on a hilltop, overlooking two rivers. We crossed the river a short way from the aire, and began our ascent up the cobbled ramps and stone stairways. The climb up seemed never ending, but finally the walkway turned into the Plaza Mayor, right in front of the enormous cathedral.

With a map from the tourist information, we headed for the Casas Colgadas, or hanging houses, which are built into the side of the cliff high up over the river way down beneath. We’d been looking forward to seeing this, but were quite underwhelmed as there were only two houses that we could see.

As a reward for all of the strenuous climbing, we stopped at a cafe on the Plaza Mayor. The €3 for two coffees was all we spent today.

Unfortunately for us, the Plaza Mayor isn’t quite at the top of the hill. There’s the remaining tower and archway from a Moorish castle, and next to that a viewing platform which looks back over the old town and across one of the two rivers, so up the hill we went. The views were fantastic, well worth the walk up. 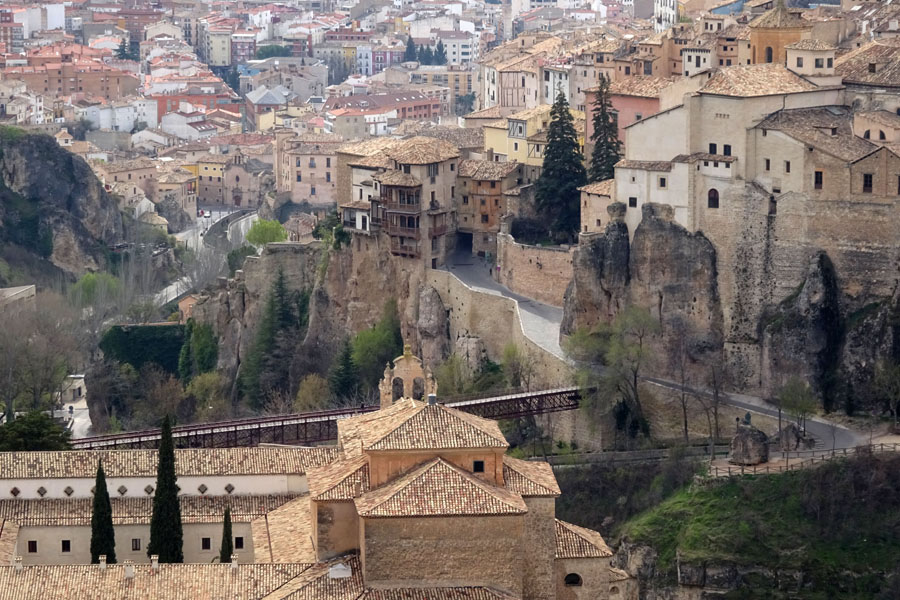 By now it was late afternoon, and we’d seen all we wanted to see in the old town, so we decided to make the descent into the new town, at the foot of the hill. Walking a long way down the steep incline was quite hard work, though not as bad as walking up. With a couple of short breaks we soon found ourselves in the main shopping area.

Most of the shops were closed, not opening until 17:30, so we made do with window shopping. The next big thing in the calendar is Easter, which in Spain means a week of celebrations known as Semana Santa. Many of the shops had filled their windows with Easter displays. One shop had really gone to town – what on first appearances appeared to be a religious candle shop was in actual fact an opticians. Another shop was selling Easter eggs, quite a rare sight.

Back in the van, we revisited our plans for the coming days. Our original schedule would have meant that we’d be in Córdoba on Sunday and Monday. We really like it there, it’s a wonderful city, and we were worried that lots of places might be closed, so we’ve rejigged our plans and we’ll now get to Córdoba on Saturday. That’s one of the things I enjoy about travelling the way we are, we have the freedom to change our plans as we go along.