It absolutely poured with rain on Sunday evening, and it was lovely going to sleep to the sound of the rain on the roof of the van. It was still raining on Monday, but we went into town as I had an appointment with a chiropractor, a Canadian guy so there were no language problems, and he gave my back and neck a really good clicking. We walked all over town, and we saw many of the ninots (the Fallas caricatures) in various stages of assembly. In the afternoon we visited the old Silk Exchange which dates back to the 15th century, and is a UNESCO World Heritage site.

Tuesday was spent walking around town as well, making the most of the calm before the storm that is Las Fallas. The weather was much better – warm and sunny t-shirt weather. There’s a Las Fallas museum near the opera house so we paid it a visit; it was quite interesting, but we weren’t overwhelmed by it. Rather than take the main roads or metro back into town, we cut through the side streets, meandering through the different barrios, or neighbourhoods, stopping along the way to admire the ninots. 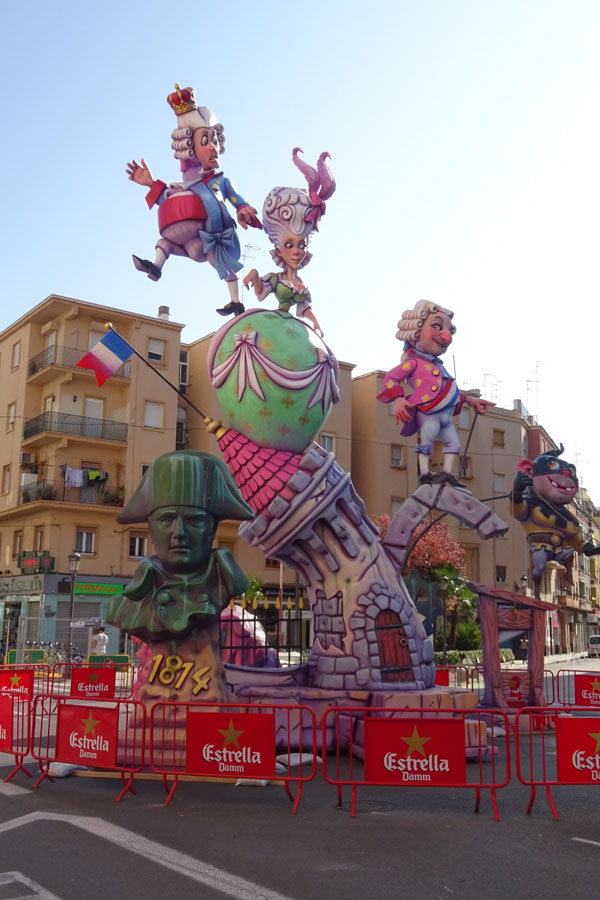 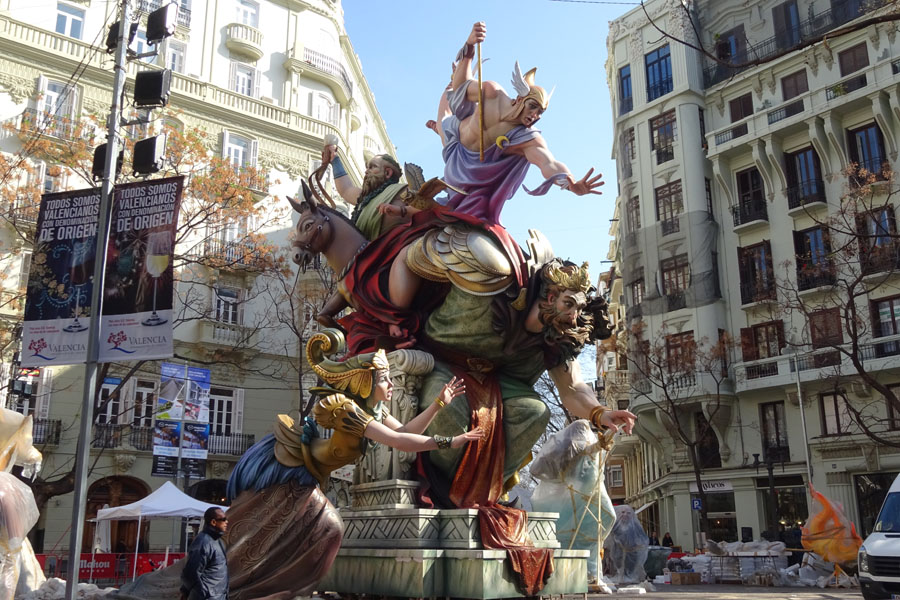 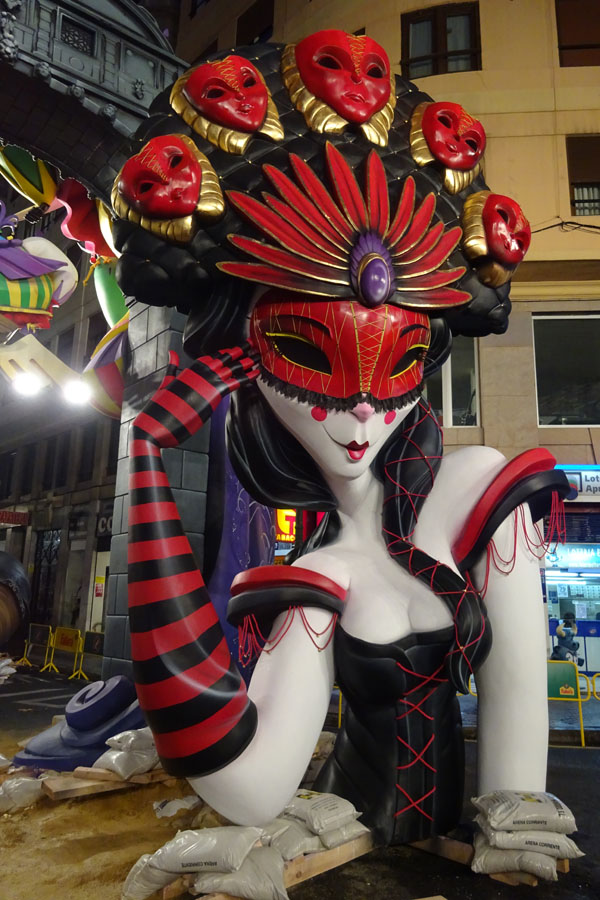 Wednesday was the first day proper of Las Fallas. Our plan was to have a late breakfast/brunch in the van, get the metro into town to watch the mascletá in the Plaza Ayuntamiento at 2pm, spend the afternoon having a leisurely wander, then have some dinner before enjoying the floodlit streets and finally heading back to the van on the metro.

The breakfast in the van went according to plan, with a jolly good fry up (though Spanish bacon does not compare favourably with the bacon from home).

As our metro stop is at the end of the line, we got seats on the train OK, but after a couple of stops the carriages were pretty rammed, almost as bad as the Central Line in rush hour. When we got out at Plaza España, the place was heaving. After a quick detour to buy some earplugs (successful) and a Spanish SIM card (unsuccessful) we made our way to the Plaza Ayuntamiento. Despite being an hour early, the square was already pretty full. We took up our position just in front of the Post Office, and by the time it started there must have been somewhere between 30,000 and 40,000 people there, and you couldn’t move. I had expected it to be a bit busy, but this was bonkers! Clearly the schools had finished early, and a huge number of people had taken the day off work.

The mascletá started promptly at 2pm, and it’s essentially a firecracker display that goes on for up to 10 minutes. There’s not actually that much to see, apart from lots of smoke, but it’s very loud (hence the earplugs) and at one point a sequence of the bigger firecrackers going off in quick succession had my rib cage vibrating reminding me of being at a Motörhead gig back in the day. Here’s a link to the YouTube video, so you can get the idea.

Once the mascletá had ended, we took a side turning away from the square in the direction of the barrios we’d walked through the day before. We found a bar on one of the crossroads, right in front of one of the larger ninots, and sat out in the sun watching the world go by. It wasn’t too busy given the earlier crowds, and many of the roads had been closed to traffic, adding to the nice relaxing atmosphere. 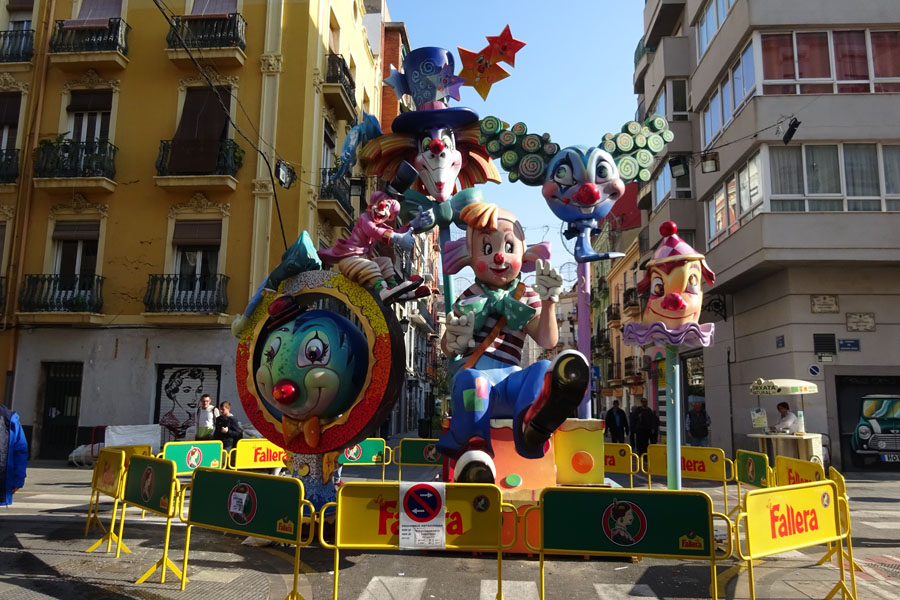 There’s a competition for the best night time light display. Having seen some photos of the prize winning streets on the Las Fallas Facebook page, we set off to find them so that we would know where to go once it got dark. The best ones were in two roads running parallel to each other, and even in the daylight you could tell that they’d be impressive. On the way we managed to pick up a SIM card with 2GB of data for €10. 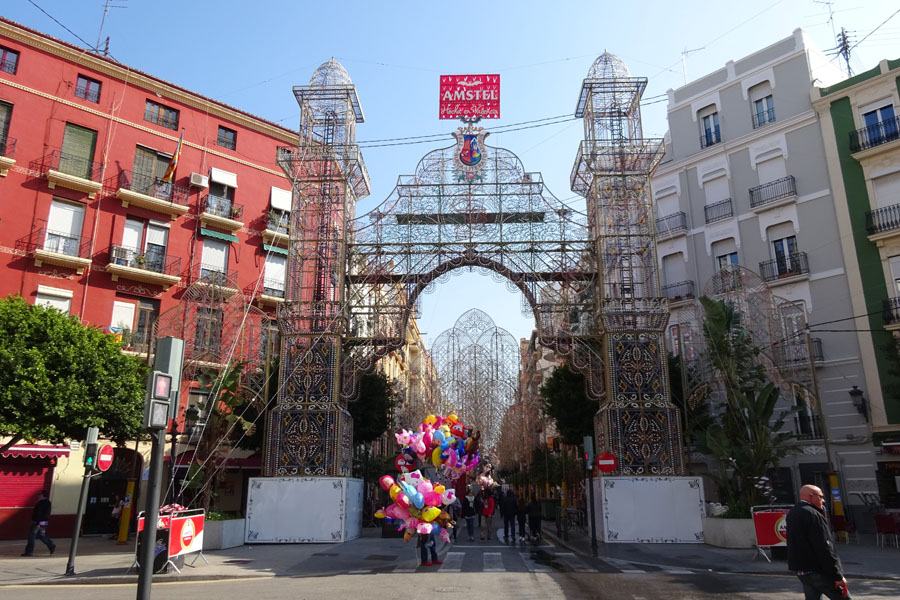 As the afternoon wore on, it got noisier and noisier, due to kids letting off firecrackers, or petardos as they’re known here. It’s a big thing here, and we spotted quite a few neighbourhood shops selling them. It seems that each kid has a lunchbox-sized wooden box full of them, and they seem to just wander round lighting them and throwing them into the roads or along the pavements. Some are really loud and can’t half make you jump! Much of the time the kids are supervised by their parents, but a lot of the time they’e not. The Health and Safety police in the UK would go berserk!

After walking for quite a while we stopped for another drink (well it was a hot day and all the walking is thirsty work!).  We were sat out on the pavement, and yes, there were a couple of young kids across the road setting off their petardos for about 15 minutes. If you closed your eyes, you could almost have been in Beirut!

The closer we got, the more congested the roads and pavements became, and it seemed that the whole of Valencia had come out to watch the light displays – there were whole families there. If you ever want to advance through a Spanish crowd, just follow the grandmother with her razor-sharp elbows and jabs to the kidneys of the people in front!

When we got to Carrer de Sueca and Carrer de Cuba, the light display was already in full flow, and it was impossible to get into the street to see it properly. We really wanted to see the displays, but by now, we’d been on our feet for a long time and we’d had enough, so we decided to catch the metro back to the van and watch the display online instead- here’s the YouTube link.

We got back to the van at about 10:30 and were absolutely shattered. Over the course of three days we’d walked over 35 miles.

Today we’re having a restful day at the camp site, enjoying the sunny weather. Tonight we have tickets for a flamenco show in town, which we’re really looking forward to, and tomorrow we’ll be going for a ride on the train to a picturesque village about an hour outside Valencia, so the next update will be on Saturday.