As it’s a 250 km journey from Rome to Pompeii, we decided to break the journey up by stopping for the night in Cassino. The dreadful condition of the roads driving into Rome made us decide to take the toll roads.

We had a bit of a nightmare getting onto the toll road though. I drove up the very narrow lane to the ticket machine so that Carol could press the button for a ticket, but no matter how many times she pressed the button it wouldn’t dispense a ticket, and there was no response from the help button. After I had reversed out a car went through the same lane and got a ticket no problem. It turned out that you have to drive right up to the barrier before the machine will dispense a ticket, even though that meant driving a couple of metres past the machine, so that Carol had to get out of the van to press the button – bonkers!

Whilst the toll roads tend to be properly maintained you can still get traffic jams caused by accidents, and so it was yesterday. Luckily we were only stationary for fifteen minutes or so. One benefit of driving a motorhome is that we have a loo on board, and if the delay had been any longer we’d have put the kettle on for a brew. 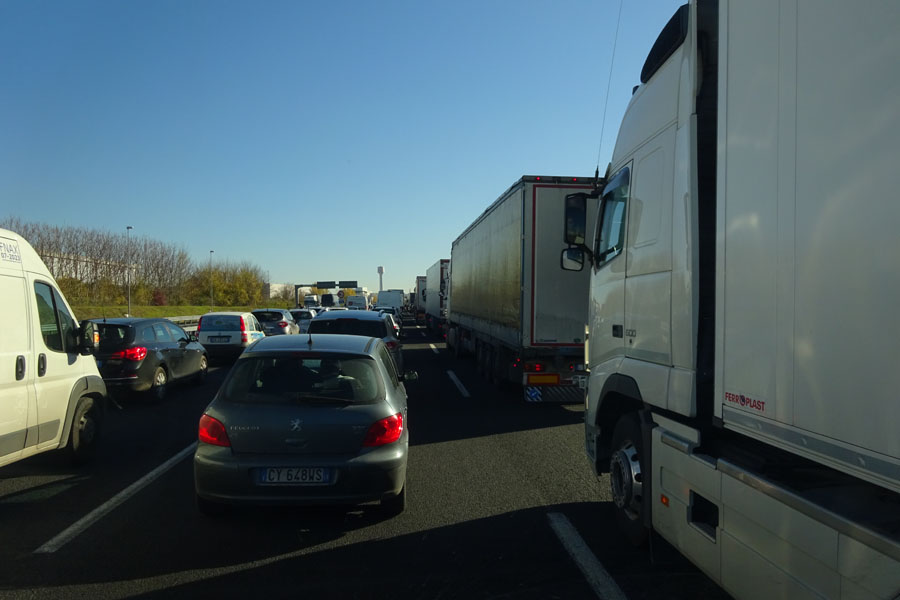 As the sosta at Cassino is half way up a mountain we spent the afternoon at the van. It was nice and sunny, so we got the chairs out for the first time in ages and had a read.

This morning we stopped to pay our respects at the Cassino War Cemetery, a huge cemetery with some 4,000 graves maintained by the Commonwealth War Graves Commission. We’ve visited lots of CWGC cemeteries across France an Belgium, and every time I am moved and humbled. The graves invariably belong to lads in their late teens or early 20’s who had everything to live for, and today was no exception. Lads from all over – a huge number of Canadians, Anzacs and Indians as well as British – a terrible waste of human life. As always, the cemetery was beautifully maintained. 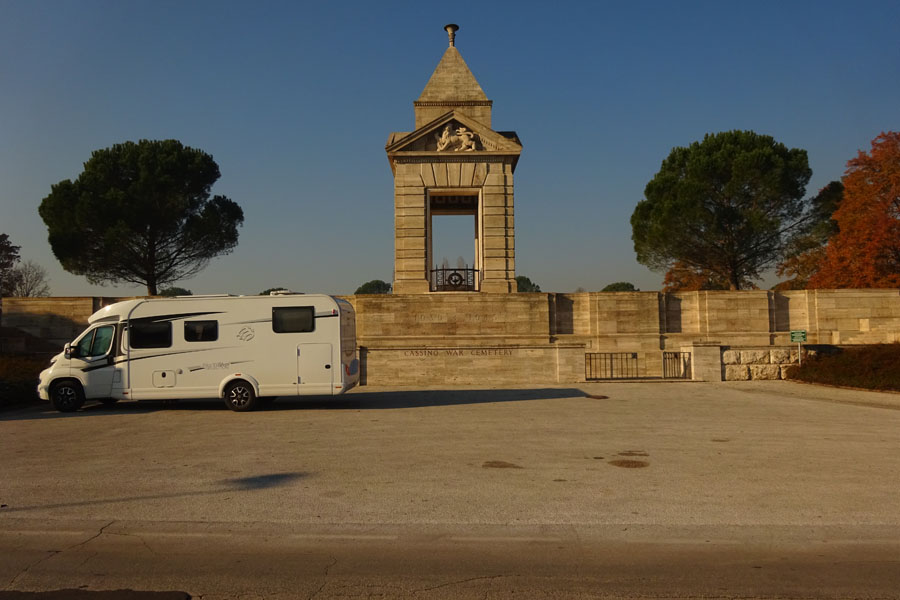 We arrived in Pompeii this afternoon. Our base for the next week is the Spartacus camp site, directly opposite the Roman excavations where we’ll spend the day tomorrow. It’s only a few hundred metres from the train station which will be really handy for visiting Herculaneum, Naples and Sorrento.

In other news we received notification that our ferry to Greece had been cancelled as the company was no longer operating the Brindisi to Patras route. We’ve therefore had to change plans and are now booked on the Bari-Patras ferry on Friday 15th December. As it’s an 18 hour overnight crossing, we’ve booked ourselves into a cabin so we will be able to get a decent night’s kip (dependent on the weather of course!).

2 thoughts on “From Rome to Pompeii”